The Candle Hat is a wearable light source in RUST that players can find in the minecarts and crates that spawn around caves and mine entrances.

While the candle hat has relatively low defenses, you can pair it with other items that don’t consume the top-of-head slot. Such as the Bandana Mask.

While the defense ratings are low, it has a substantial amount of cold protection, making wearing one viable for dealing with cold nights.

After equipping the candle hat, you can turn the candle on or off, either through your inventory or by pressing the F key.

The candle hat emits bright yellow light in all directions from player head height. Lightning the candle doesn’t only let you see in the dark but will also trigger the shining mark on mining nodes in caves.

By hitting the shining marks, you can mine each node twice as fast.

However, since the light from the candle hat shines equally in all directions, having one equipped and lit at night will make you visible to other players, particularly in caves and during the night. 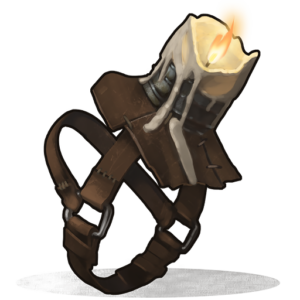