The RUST Camper Vehicle Module is a vehicle component for the 3 and 4 piece modular vehicles. Facepunch introduced the modular vehicles in the Modular Vehicle Component Update on the 3rd of July, 2020, with the Camper Module following later in September of 2021.

Like all modular vehicle components, you can only add or remove this vehicle module by having the frame raised on a powered Modular Car Lift.

The camper module itself boasts a number of amenities including 4 built-in sleeping bags (though they appear as beds), storage in the form of a small onboard box and standard locker, as well as a portable barbeque for all of your tailgating needs. It seats four players in total.

The camper module wouldn’t be considered a combat vehicle type, acting more as a rad raid base on wheels. The windows offer minor protection to passengers inside, but you aren’t able to fire through them from inside like some of the armored variations available. 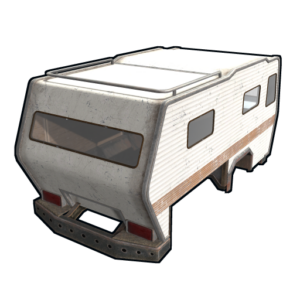