The Butcher Knife is a sharp gathering tool and melee weapon.

As the butcher knife is a part of the RUST Halloween event and not always available in-game, many players will not have seen or handled the butcher knife, unless they played during the event.

It boasts the same gathering rates as the Bone Knife but outperforms it in damage. However, it does significantly less damage than the Combat Knife, and you cannot research it into a replaceable Blueprint. 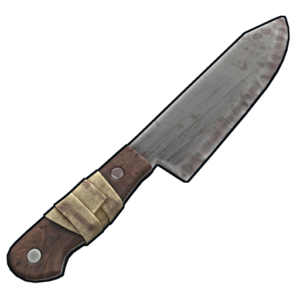