Burlap Gloves are a default item players can craft immediately after spawning and offer the least amount of protection of all gloves in RUST.

There are no other gloves to use until you have acquired blueprints, making these a fairly default item for players to use until upgrades are found, Blueprints are researched, or purchased from vendors and vending machines.

Burlap provides very little in the way of defense, but the other benefits of the burlap set make them worth crafting nonetheless.

They will be outclassed by all other armor sets very quickly. Still, the Burlap set includes a substantial amount of cold resistance, allowing players to venture into the winter biomes and set up there if they choose. They also provide a small amount of radiation resistance.

You can craft all burlap pieces with Cloth alone. You’ll find cloth in RUST by picking up the green hemp plants that litter the starting areas.

While it may seem like a chore when you begin the game, players quickly develop a habit of grabbing every hemp plant they see while traveling—even going out of their way to pick one up unnecessarily. 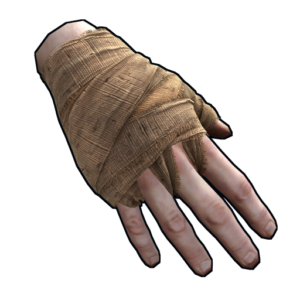