The Bunny Hat, introduced to RUST in the April 2021 Easter Update, is an Easter item that is wearable on players’ heads.

Originally the bunny hat was a skin available on the Facepunch Item Store but now it can only be found on the Steam Marketplace.

It’s important to note that it is not the Bunny Ears from the April 2019 Easter Update, which let players see more hidden eggs during the Egg Hunt event.

The bunny hat provides moderate projectile and melee defense while contributing a small amount of rad protection and cold protection.

Armor-wise, it is still very early-game. The bunny hat leads only slightly over the Beenie Hat but is worse than the Wooden Armor Helmet.

As cool as the bunny ears and googly eyes are, the bunny hat only finds value in a precise window between upgrades and makes players’ heads stand out, with its bright colors and large floppy ears.

Realistically, the bunny hat is not about survival or RUST meta. It’s just another RUST way of letting other players know you’re not taking things too seriously and a great item to use in celebration of Easter time! 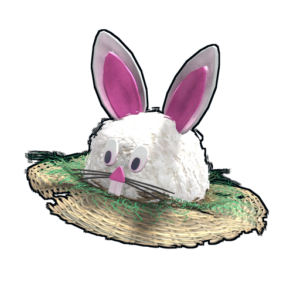