Bone Armor is a multi-slot piece of gear that takes up all armor slots from the neck down. It is made from interwoven bone and Cloth and is ideal armor for the start of a wipe.

As the early game in RUST requires you to kill some animals to get Animal Fat, you are also likely to pick up some Bone Fragments.

The only other material you will need to gather is cloth, which you should be able to pick up from hemp plants as you travel the spawning areas.

When combined with a good helmet, such as the Wolf Headdress or the Riot Helmet, bone armor stands out as some of the best early game armor, boasting a significant amount of melee and ballistic protection.

The major drawback of bone armor is the lack of cold resistance and radiation resistance. Because of these deficiencies, you cannot utilize bone armor in frozen biomes or at any irradiated points of interest.

However, because the bone armor covers most of the body while only consuming one armor slot, it is ideal for roaming and PvP when the Patrol Helicopter patrols the area. 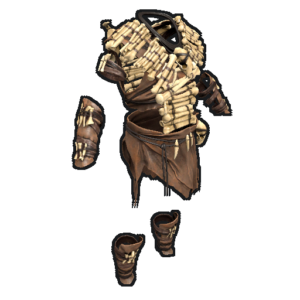