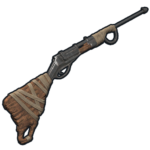 The Bolt Action Rifle is a high-damage, highly accurate long-range rifle that is the standard of sniper weapons in RUST until players can acquire the L96 Rifle.

The bolt action rifle makes a distinct cracking sound that most players can identify and a slow refire rate that gives it away, even when heard at a substantial distance.

Due to its severe damage and slow refire, this rifle typically fills the role of a sniper and needs to be paired with the 8x Zoom Scope or the 16x Zoom Scope.

As you need to be firing from a sniper’s perch, there isn’t much point in applying a silencer to a bolt action rifle. As well as your high visibility, your range leaves a much wider trail of bullet tracer that players can use to determine your location.

However, the extended rage gives value to several other tools for the bolt action rifle. Namely the attachable Weapon Lasersight and the Tactical Gloves. Either one of these items will significantly reduce weapon sway and improve stability.

Along with reducing weapon sway and improving your range, it is necessary to adapt to bullet drop.

You can practice firing on battle tags servers, but nothing replaces trying to use the bolt action rifle on a live server.

If you’re struggling with the bullet drop and don’t seem to be improving, it might be worth your while to get your hands on HV 5.56 Rifle Ammo.

The high-velocity ammo has the advantage of leaving the bolt action rifle at a higher velocity, thus improving the range the bullet will travel before it begins to descend.

Both HV and normal 5.56 ammunition do the same in terms of damage. However, the HV Ammo does cost more in production.