The Blocker is a RUST electrical component that is highly useful.

Its primary function is to block electricity traveling through the unit’s mainline if the socket on its side also receives electricity.

The blocker has two inputs and one output that players can wire into if they have a Wire Tool on their Hotbar.

When electrical power feeds into the input on the side, the mainline will stop providing electricity through the blocker’s top output socket.

Doing so will result in the blocker trying to block itself and will short out the circuit.

A typical use for the blocker would be to run a sensor’s output into the side input circuit so that power shuts off to services you do not want unfamiliar players to access.

The blocker has poor health, so if you are wiring your base, keep the blocker on an interior wall to prevent players from easily destroying it. 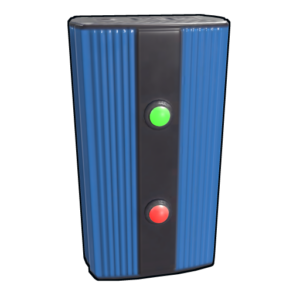