The RUST Auto Turret is a powered device that uses a motion detector to target and fire upon any target that enters its field of view. It underwent significant changes in the Modular Turret Update on February 7th, 2020.

Once a set and forget deployable, the auto turret now requires a considerable amount of preparation and planning.

First, the auto turret now requires ten electricity to be running to its power in the socket. Without power, the turret will deactivate, and players will have an opportunity to approach it and remove the weapon and ammunition.

Also, a new feature of the turret is its requirement to have a weapon placed into it. An Assault Rifle was once the default weapon, but now it can be any weapon in the game, provided you have ammunition to support it.

Many players consider the Bolt Action Rifle to be the most deadly weapon to place in an Auto Turret since these changes. However, if you genuinely want to devastate your enemies, we recommend you try equipping the auto turret with a Plumber’s Trumpet.

The auto turret also features three power outputs to connect to electrical components that emit power depending on three separate states for the auto turret.

You can hook up these outputs to lights or alarms to let you know the state of the turret without being near it. Alternatively, you could hook up the ‘no ammo’ output to a component that will close off the turret, protecting it when its ammunition runs out.

The turret can no longer be drained by players, as it will stop firing as soon as it loses view of players and refunds missed shots back into the turret.

If you try to strike a turret while facing away, it will turn to face the source of damage and fire immediately.

The only viable way to destroy turrets is to damage them from range, explosives, or damage that leaves fire to destroy the auto turret over time.

For more in-depth information,  check out our guide on how to set up auto turrets in RUST. 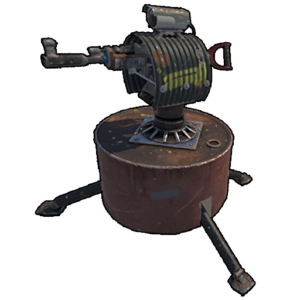