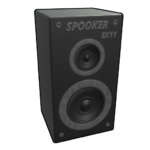 The Audio Alarm is an electrical component that can activate with a minimal amount of electricity.

Facepunch added electricity components in the Electric Anniversary update on the 7th of December, 2018.

The audio alarm has one input that will trigger a loud beeping sound when powered. Then, if you have electrical sensors around your base, you can run the activated power into the audio alarm to let you know that people have approached.

While the audio alarm is incredibly cheap to produce and uses very little electricity, it suffers from several substantial drawbacks.

Both you and the attacking players can hear the alarm. Thus, effectively letting aggressors know they have triggered some kind of alert.

The alert noise is quite loud and high-pitched and will cover most other noises within its vicinity.

Short of a complicated circuit switch, there’s no easy way to shut off a ringing audio alarm without depowering it.

Considering its low health, it doesn’t provide much in terms of base security.

Also, an alarm triggered and not addressed will let players know that it is unlikely that you are online.

Realistically, the audio alarm service is performed better by either a Smart Alarm component or an RF Pager and RF Transmitter.