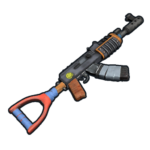 Widely considered by many to be the most desirable weapon in RUST, the Assault Rifle (AK47) is both the weapon of choice for large groups and solo players and the most valued prize of PvP combat.

Other weapons that do similar damage or fire as quickly as the assault rifle suffers substantial recoil, or low damage per shot, in contrast.

With an ideal firing range of 5 to 30 meters, the assault rifle is a perfect weapon for most, if not all, player combat encounters.

Depending on your target’s armor class, the assault rifle will take 2 to 4 rounds to down a player to the wounded state. Considering the assault rifle’s fire rate of 450 RPM, you can deliver these few rounds very quickly.

The longer you fire the assault rifle, the greater the recoil will kick the weapon up. The ideal firing pattern is short bursts of 4 to 5 rounds before readjusting and firing again.

With 30 rounds in the clip, capping your firing to bursts of 5 shots lets you know that you have six bursts of firing before having to reload.

You can also tape the assault rifle to fire singular shots, making long-range firing possible. However, it is essential to note that the damage falloff begins after approximately 30 meters, making other weapons such as the Bolt Action Rifle Ideal for long-range shots.

There are many resources out there to learn the recoil pattern of the Assault Rifle. But, in short, the recoil will kick the nose upwards in an ascending S pattern. However, if you limit your firing to short bursts, you will not likely need to master the recoil pattern.

In addition, this weapon is a prime choice for setting up Auto Turret defense systems.

Ammo used by the Assault Rifle