While sharing the exact same defensive statistics and recycle yield as a common Hazmat Suit, the appearance of this arctic scientist suit is more of a base white camouflage color than the player version. The scientists that use this item are highly aggressive by nature to players. Despite the name, this suit does not protect players against cold weather as the alternative Arctic Suit does. 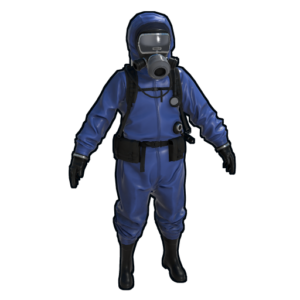