The Advent Calendar, introduced to RUST in December 2021, is a seasonal item available for players to craft during the Season’s Beatings! Event. Craftable by players, the advent calendar is a deployable object, similar to the Christmas Tree in size, that allows players to claim one gift box every 24 hours.

The gifts run from December 16th through the 25th and unlike Small Stockings and SUPER Stockings, the rewards are individually awarded and cannot be directly stolen by other players.

The advent calendar is deployable on any flat surface, either naturally occurring or on a player-built foundation. It does not take durability damage when deployed or picked up, so you can move it around as you like. It also doesn’t require you to have Tool Cupboard authorization in order to claim your gifts, so players may access other players’ advent calendars to acquire their daily gifts.

After each day of the event has passed, a red “X” will appear on the previous day’s gift box, indicating the claim window for that gift has elapsed.

When players attempt to claim a gift for a second time within the same 24 hour period, an error message will display across the player’s screen stating:

Players will have the advent calendar as a default blueprint, without the need to learn it during the Holiday Season event. The calendar can be crafted at a Tier 1  Work Bench for a small amount of Wood and Cloth and it can be recycled for half of its crafting cost. 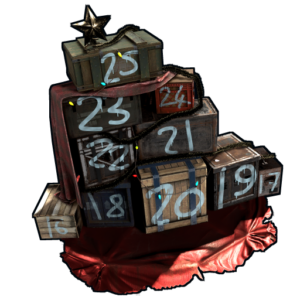