5.56 Rifle Ammo is the most common ammunition in RUST and is necessary for a wide range of guns and automated defenses.

You can find 5.56 rifle ammo in many types of crates or as loot from most NPC’s. While there are no in-game stores in RUST that stock 5.56 rifle ammo, players will often sell this ammunition from their Vending Machine shops.

5.56 rifle ammo recycles poorly and doesn’t yield much in the way of Gun Powder, and you only need to research it once, so all your ammunition is likely to be used by your team or placed into automated defenses, like Auto Turrets.

5.56 rifle ammo can fire through most wooden walls and even trees. However, many temporary deployable items can block 5.56 rifle ammo.

Weapons that use 5.56 Rifle Ammo 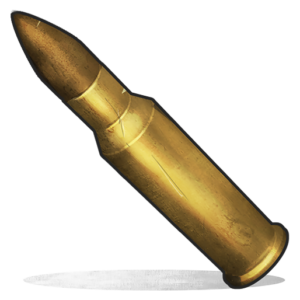