Introduced through the QoL Devblog in April of 2019, the 40mm Smoke Grenade is ammunition for the Multiple Grenade Launcher. These rounds will produce a substantial cloud wherever the canister lands.

Smoke clouds create an area of obscured vision for players looking in its direction, as well as completely blinding anyone in the smoke cloud radius.

There are several ways to utilize the smoke cloud created by the 40mm Smoke Grenade. Primarily you can disable players defending a base raid.

If players are firing from windows or the roof, 40mm Smoke grenades can prevent effective ranged defenses.

You can also use the 40mm Smoke Grenade to obscure players from the view of Auto Turrets, CCTV Cameras, and other automated defenses. In addition to this, they make for wonderful decoys to throw enemy players off and help to add chaos to the mix.

Weapons that use 40mm Smoke Grenade 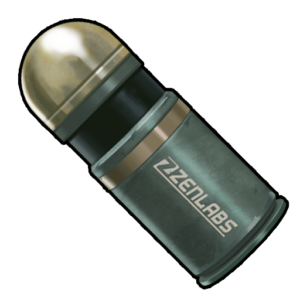