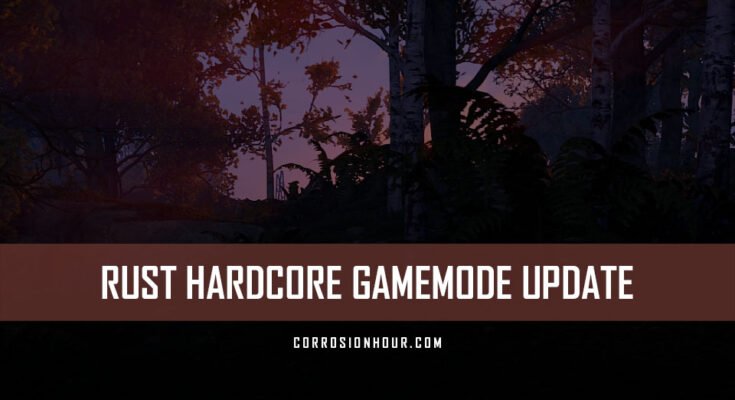 Facepunch Studios released their latest RUST update titled Hardcore Gamemode on 1st September 2022. This update introduced RUST’s second officially-supported game mode: Hardcore Mode. In hardcore, RUST’s most dauntless players have the opportunity to return to a simpler time before that nonsense of navigational tools and communication systems. In hardcore mode, it’s just you and whatever you stumble into.

It’s been a hot minute since Alistair announced back in July that Hardcore mode was confirmed and would be arriving…soon. Now that the game mode is live, players can play the foundational version of hardcore to provide feedback on what works and doesn’t. Facepunch plans to iterate upon the game mode, so any and all feedback can help shape hardcore into a genuinely great experience.

Some of Hardcore Mode’s key features

The map is one of those features of RUST’s vanilla experience you don’t realize you love until it’s gone. It seems so simple, but so much of your regular gameplay is dependent on being able to press ‘G’ that you almost don’t know what to do when pressing it does nothing. So hardcore took it away.

To give players a true “you’re on your own” experience with hardcore, all mapping and navigational features are disabled. That also means any features that rely on the map are out. These include:

Players will find that there is no such thing as safe zones in hardcore, so extra caution must be taken when visiting these locations. No peacekeepers are around to protect you from hostile players should someone try to shake you down after purchasing a new mini. And with a limit of just five beds or sleeping bags per player, it may mean a long, confusing run to reclaim your things after an encounter with the local wildlife.

For a complete guide to the changes in hardcore mode and information on how you can set your server up for a hardcore experience, see our guide to hardcore mode in RUST.

Furnace UI gets a redesign

All oven types received a UI makeover with this update to simplify the task of resource refinement. In addition to inventory layout changes, the way raw products are processed into refined products has been modified somewhat.

Furnaces will now allow stacks of ore to be queued up for smelting, but instead of smelting all stacks over time, furnaces will now consume the stacks one at a time from left to right (think recycler behavior). The rate at which furnaces will smelt each stack depends on the size of the furnace:

Barbeques and campfires were also updated with the new furnace layout. Not surprisingly, the cooking behavior is similar to smelting behavior in that food will cook one stack at a time, beginning with the left-most stack. The rate at which food cooks is as follows:

An interesting change to note with the UI update is that food will no longer burn. When cooked food is sent to the output buffer, it seems to be safe from further charring. No more burnt bear meat because you fell asleep while cooking.

The Drone Marketplace model gets a revamp

The RUST marketplace was initially released into RUST with the Softcore Gamemode update, so it’s only fitting that the marketplace would get an update with the Hardcore game mode release.

The new marketplace model features eight terminals instead of the previous three, with four on each side and a nice tarp awning to keep the rain off while you wait for your order. The new model replaces the previous placeholder models in Bandit Camp and the Outpost compound and is placed in slightly different locations due to their larger size.

The marketplace terminal in the Outpost is just a bit southeast of the previous location, where a green truck now resides. You can find the Bandit Camp marketplace on the same little island in their swamp. Unless you are playing on a hardcore server, then you won’t see them at all.

Additional updates and changes in the RUST Hardcore Gamemode Update