In this video, Quick Electric walks us through how to create a SAM Site Beacon that allows players to use their minicopters without risking being destroyed by their own SAM sites.

Minicopters are highly valued on RUST servers, as there is a finite amount of them available at any given time. Having the ability to promptly leave a base and take off safely is crucial. In a previous video, Quick Electric taught us how to set up an automatic minicopter hangar.

Having the SAM Site Beacon enables players to:

As bases become larger and more visible to enemy players, SAM sites become critical for preventing raiders from landing on or in your base’s compound. The SAM Site Beacon simply works as a fly-by location to trigger a timed toggle. This allows players to fly by the SAM Site Beacon tower which will temporarily disable the SAM site so that players can safely enter their own spaces and land in a hangar.

Hey everybody, RUST Quick Electric here with you today after a long hiatus. Meanwhile, I finished my degree, got that, fully approved and everything so that’s exciting. And I also did some soul searching with RUST and the community as well as the electricity aspect of the game.

I began to play several wipes with good friends, had tons of fun, and came to realize that I wanted to focus more on practical electricity in the game.

And now one of the biggest things that I reached mid to end wipe was the idea of having a SAM Site which is,as I am sure that many of you know, absolutely necessary if you are with a larger group to prevent people from flying up onto your base. But the issue lies in that it is a pain in the butt to take your own minicopter in and out of your base.

Yes you could disable it, yes you could turn it back on, yes if you have other people in your base you could turn it on and off as needed, but what I wanted was a unique way without losing a pager to the enemy to have a sort of entrance exit plan, which brought about this idea of having a sentry tower or a SAM tower.

Now, the use of this basically is you create a very cheap but efficient beacon tower that uses the HBHF sensor as a fly-by location so that you can timer toggle it off as you are leaving your base which is over there in the distance and you can have a fly by point whereas as you do a pass by of the tower, you will then begin a timer that disables your SAM site for your set amount of time as you come back in and land on top of your base.

So we’re gonna go ahead and get started with this build and we’re going to begin with the tower setup. As you’ll see I try to pick a very high point on the map that is within a one-square range of your base.

Now, the SAM site works at about a one square range, so as long as you’re outside of the base location is, approximately one square wide, it will not shoot you as you approach your beacon tower. You’ll see the foundation, a door, TC, stairwell up, and then another door out.

You can do the wiring inside of it, which is the point of the tower, but for the sake of the video I’ll be doing it outside. You’ll see that I’ve already started with two solar panels facing both east and west connected to a root combiner.

We’re going to be three branches, one blocker, one OR, one RF broadcaster, one HBHF and one siren light for convenience of seeing it at night. Now what we’re going to do is place our first branch here and we’re going to go ahead and wire the root combiner combined power output into this. And I am doing it on the side of the wall here just for visual use. Keep it a little more clean than me.

We’re next going to follow up with our battery setup and I did forget the battery. So you will use a small battery for this build. The reason being that it holds a 15 minute charge being night and it will always run.

We’re going to use a charging while draining setup so that it is running at all times all day all night. The battery holds fifteen minute charge so there should be no overlapping with the amount of drain it does. I’ve tested on multiple nights and it seems to have no problem at all.

So we’re going to start by setting our initial branch to using a branch off power of five.

And then the input B of the OR switch is going to come from the other slot of this initial branch coming from the root combiner like so.

Now what we’re going to do is we’re going to go up to the roof, we’re going to have the HBHF placed directly from the roof looking up because as we fly over we want this to detect us as an authorized TC user and emit this signal. So we’re going to place a branch here now to make wiring this a little bit easier. The power in of the branch is going to come from the OR.

Now that we’re wired we’re going to proceed back up. We’re going to go ahead and place the siren light as well as the broadcaster. This is going to be set to an amount of two. We’re going to have the branch out of this go into our HBHF and yes, it does matter. I have people message me all the time saying “Hey, I wired it exactly as the schematic has done and it does not work.”

9 out of 10 times when I hop onto the server with them to help them it is because they are not paying attention to what they are wiring their branch out to and the power out to, so make sure you pay attention to that.

We’re then going to wire the power out to the siren light. Like so. The power out of the HBHF will be going in to the broadcaster. And you’ll see that it’s already toggling with me here because the HBHF is set to the authorized user of a TC. And we’ll go over these again.

We want to exclude others so now others are excluded, but we want to include authorized. So, as with any HBHF video, it’s counter intuitive because looking at this you’d think that it’s excluding authorized but the thing is that if I were to click this it would exclude authorized.

So it is currently including authorized and excluding others. So this portion of the build is complete. You’ll see that during the daytime, the battery is charging while the top devices are still draining power appropriately. So let’s move on to the second part of the build.

The second part of the build as shown in the schematic, we’re going to begin the roof setup portion which is much easier. We’re going to need a splitter, RF receiver, timer and a blocker. And you’ll see that I’ve already got setup a wind turbine and a SAM site, which are essential to any mid to late game for any large base.

We’re going to start by setting up the frequency here and we’re going to set it to 1111 and we want to make sure that the other one, the broadcaster, is set to the same as whatever you have your receiver set to, 1111.

Obviously, you can set it to whatever you like, but for the sake of this example, I’ll be using 1111. We’re going to have the splitter setup and you’ll see that I have this little half wall here because you cannot place some of these components on the ground otherwise I would, so this little half wall will make due.

Like so. And you’ll see that this is currently powered, loaded with fuel and everything. We’re going to have this come across. We’re going to set our timer. Now, I found 45 seconds to be perfectly fine for me. We’ll adapt the flying gives me enough time to get in and out while keeping the window short for other people to enter.

For starters sake, I always say start with the meta and then go from there. And then it’s as simple as when you activate this, it will block for 60- seconds currently pausing the SAM site, allowing you to take out and leave, and then will auto-restart the SAM site after 60 seconds.

Then, once you are making your return flight back home from wherever you are, you are going to make sure that you have a flight path staying outside of a square radius of your main base coming by your flight beacon right here and you’ll hear as you pass, you’ll hear that noise, you’ll know that you toggled it. You now have 1 minute to return, land and exit the vehicle before that SAM site goes and you’ll see that the timer is activated and is going from this receiver.

As with any video, I welcome you guys to join our discord, link in the description. And I thank you guys as we recently passed 2000 subscribers. I hope to be uploading more content more frequently now that I am done with my schooling and I hope to see you guys soon and in servers. Thanks! 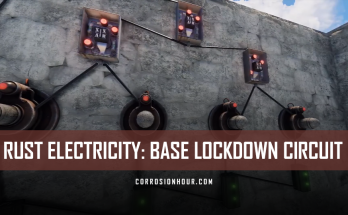 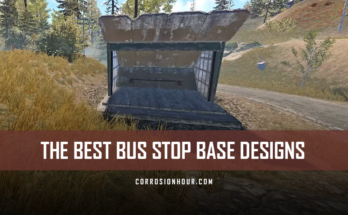 How to Build the Best Bus Stop Base