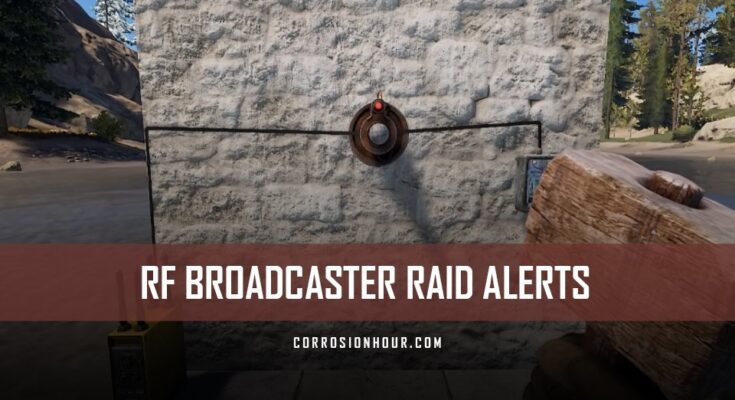 Use the RF Broadcaster to Setup Raid Alerts

This RUST electricity guide was created by our content partner Quick Electric. He provides simplified, easy to follow video tutorials around RUST’s electricity system. Each of Quick Electric’s videos walks through the necessary components and their interactions. You can follow up each video with a detailed schematic that shows each of the components and how they’re integrated into the greater system.

In this video, Quick Electric walks us through two different raid alert systems that utilize the RF broadcaster. Both systems can easily be added to any base design. The first is a dead wall alert that lets players know when there is an enemy actively raiding a base. The second is a proximity alert that allows players to know there are enemy players within a certain vicinity. Each of the systems will allow you to be alerted while away from your base.

Receiving a preemptive raid alert allows players to react in a more informed manner while away from their bases, enabling the following situations:

With the introduction of the electricity system, RUST base designs will never be the same. Having electricity in RUST allows players to greatly bolster their base’s defense as well as improving its overall usability. With automation, it also enables base designers to be pro-active and set up offensive measures into their designs, a concept that’s very new to RUST. And now with the RF broadcaster and pager, players can be away from their bases and compounds and remain informed as to the current safety status.

Hey everybody, Rust Quick Electric here, again with another viewer request regarding the RF broadcasting system, as well as an anti-raid defense. Now the idea behind it is the RF broadcaster is this small little modem looking device where when you send a frequency to it and give power to it through the power in portion, it will shoot a frequency to the RF pager that is in your inventory that is set to the same frequency.

Now the RF pager has a silent on, silent off function as to whether or not it’s going to beep or just give a little notifier symbol. The beep can be heard and other people can pick it up and hear it as well if it’s set to the frequency. The nice part about this versus an RF trigger is that it can’t be used to activate anything, it will simply give a noise or notifier preventing any real grieving to occur if somebody were to get it from you. It does work map-wide and it is extremely effective to have on you if you’re roaming and have concerns that somebody may raid your base.

So let me quickly demonstrate what it appears to do. Going to do power into a switch and then we will do power out from the switch into the RF broadcaster. So I’m going to set a frequency by pressing E, we’ll set it to four twos. And then in inventory, I’m going to set the frequency of the RF pager to the same number. Now there is currently a known glitch where if you craft the RF pager, you cannot set the frequency, but that is either going to be fixed soon or has already been fixed at this time. In custom servers spawning it in, or in regular servers finding one, they will work as intended.

Now as you’ll see when the power is applied to the switch, the RF pager begins to make a buzzing noise, and show the little notification lightning bolt. Now if I turn off silent, it turns into a alarm that can be heard while you are running, and it does not need to be the active item in the menu slot. You can keep it in your inventory and while you’re roaming, it’s a perfect device because the instant that stops, it will stop paging.

Now let’s get onto some cool builds with it. First build with the RF broadcaster I’m going to show you is a reference back to a dead wall trap that I had made weeks back. We’re going to be using three switches, an XOR gate, a branch, the RF broadcaster, and the RF pager. The use of the first switch is, as with most builds, just to have a power supply cut-off so we’re not constantly draining.

And I am using a generator as usual, if you don’t know these can only be spawned and created as of right now, and the main power source for you would be a wind turbine or solar panels. We’re going to build out into a branch for power. Wire this in. And then we’re going to have our first switch, which is the always on switch where we plan to use this device. We will have our RF broadcaster.

We’ll be sure to set the frequency to a number that we’ll be using on our pager, which can be set to anything. And we already have the pager set as well to four twos. We’ll then have our XOR switch. Now an XOR switch, if you don’t recall, is a switch that will only allow pass through if there is only one input available that is currently powered.

So we’re going to do a branch out here. Down to our always-on switch or our arming switch. The output of this is going to come down into one of the inputs. And I could demonstrate the use of an XOR right now. If I turn on this, it will allow pass through because only one input is currently powered. If both were to be powered, there would be no output at the time. For the time being, let’s turn that off.

We can turn this up to five, not necessary but one can be an issue at times when passing through multiple things. So with the dead wall trap, we’re going to have a twig wall, half wall, triangle floor, whatever you need in your base that when the raiders come, they have to pass through it at the time and they would destroy it by any means, and that will set off the trigger. It’s better to have it at the earlier portions of your base as you will be notified sooner.

So we’re going to put our switch on here. And now the cost of this may seem a bit pricey, but in terms of getting a raid defense, if you’re going to get raided, you have to look at it as if you were going to lose everything anyway, so wasting five ??? on a switch is just not that expensive if you get notified cross map if someone is coming.

I’m going to turn the silent off for now, and we’re going to see how this works. To arm the trap, as with any, you would turn on the main power supply. You will turn on your arming switch, which you’ll see with just one power flow through the alarm will begin to go off in your inventory. The second arming switch here will now turn it off.

Your base is now prepared to go. You’d exit your base for the roam, and then if people were to raid, say you’re cross map, they break your dead wall, all of a sudden your pager is now going off and you’ve been notified that something is going wrong at your base. This one is easy to reset up. It’s as simple as turning it off with your main power kill switch, and it can always be reset up with another switch connecting to the input B of the XOR.

Now let’s move on to our other one. For the second use of the RF broadcaster, it is much more simplistic and personally my favorite. All you need is a switch, the HBHF sensor, the broadcaster, and the pager again. This one works by detecting people with the HBHF and immediately sending through a signal to the broadcaster. So we’re going to set off with our basic switch power cut off, which we’ll bring right across to here.

You’ll then put your HBHF sensor on any wall that you want to detect the person. Now you can have it be your teammates, or your enemies, which would be configured with the hammer on the RF broadcaster once it has received power. We’re going to put our main power output through our HBHF sensor.

We’re then going to have the power output of the HBHF sensor come down into our RF broadcaster. You’re going to set the frequency as done previously. You’re going to have the frequency set on your pager. And now the way this works is when the power is turned on, the HBHF sensor is live your alarm, or the broadcaster will output when a person who is not meant to be included within your permissions is around, and it will send a notification to the pager.

As shown in the prior video, you can configure the HBHF once it is powered while holding a hammer. You can press and hold E, and you can choose who to include or exclude. It is inverted in the way it displays, but you will quickly catch on how to modify it. We’re going to exclude authorize, because I was a current authorized user on the TC, and you’ll see that the alarm has begun to go off.

The HBHF requires line of sight, so until I’m within vision of it, it will not notify. Having it within your base is a very good way of notifying you when people are going in. The beauty is that this can be hidden with chests, workbenches, and furnaces. Pretty much any entity that is not a wall, it will not block it, but it will still allow pass through.

If anyone has any questions, as with any video, I am always available in the comments or the Discord. I want to thank you all, we recently hit five hundred subscribers which is beyond exciting! And I’ll catch you on the next one. Thanks!