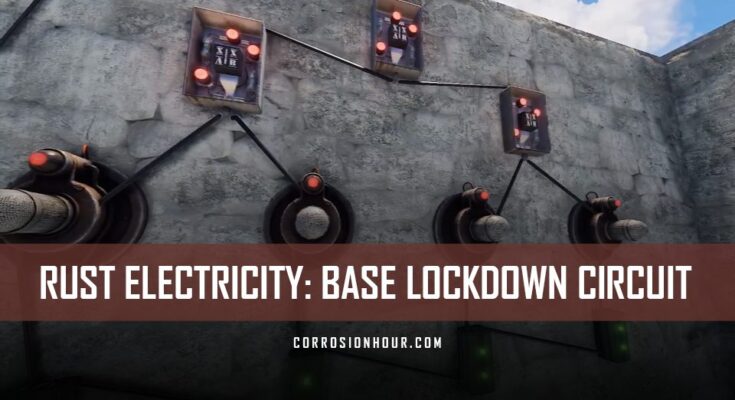 This video RUST electricity guide, base lockdown circuit, is brought to you by our partner Malonik.

In this video, Malonik responds to a user request around creating an electrical circuit that allows HBHF sensors to monitor your base, alerting you if someone’s raiding and immediately lock down your base doors. This base lockdown circuit is particularly beneficial, considering the size RUST bases can grow to be. With bases of all sizes, it’s difficult to know whether or not you have properly closed all doors in the event of a raid. If you’re away from the base while being raided, this lack of knowledge can compound your fears.

Malonik does a great job walking through the idea behind the circuit, while also explaining the inner workings of how it actually works. Many instruction videos gloss over the details, with this video, you will walk away truly understanding how this works and how you can benefit from implementing it into your next RUST base design.

This one comes from Nycee, and they want a circuit that will close their doors when a sensor detects unauthorized people.

In other words, if someone gets in the base, the base will lockdown.

Now that sounds pretty straight forward however they want this one circuit hooked up to multiple sensors around the base, and that’s where it gets a little more tricky.

Nycee didn’t specify how many sensors or door controllers they’re wanting to be connected. So for the sake of the guide, I’ll use four sensors and three door controllers. You can use more or less, depending on your setup.

Make sure your sensors are set to exclude authorized and include unauthorized. Also, you’ll need to increase the branch power on branch one to accommodate all your door controllers. For this particular setup with three branches and three door controllers, you’d need eight power. Increase this as needed.

Now some of you more electrical savvy boys and girls may have noticed that this circuit won’t reset or that we could have used a blocker instead of a memory cell.

Technically you are not wrong. However, I want to add something else to this circuit to improve security. I didn’t include this part in what you need because there are multiple options here.

So in order to get the circuit to reset, we need to trigger the reset on the memory cell. You can do this in a number of ways. You could put a switch somewhere in your base. Or even multiple switches in different locations running into an and switch then to the reset.

You could use timers, so you have a limited time to reset the circuit, making it harder for those without access to doors. Hell, if you want to get fancy, you could even use timed pressure pads, so you have to do a circuit of your base within a set amount of time.

Play around with it and get creative. There are so many different ways to trigger the reset.

Now let me tell you why I wouldn’t use this circuit.

I’ve never liked the door controllers. They compromise your base’s security if the raiders are smart. See once they take TC, they obviously have building privilege. So all they have to do is disconnect the door controller and hook it up to a little battery, and just like that, the doors open.

They can continue to make their way through your base with this method and get into anywhere with a door controller without any booms.

That being said, a lot of people don’t think of this, and I’m most likely overly paranoid, so it’s up to you whether you want to use them or not.

Now some of you have asked me to explain how the circuits actually work. So let’s give it a go.

Literally, all of the electrical branches are just for powering the components. Branching out to the component and using the power out to chain together. This one is particularly important, but we’ll get to that in a second.

The HBHF sensors all run into xor switches, which then get funneled down into one xor switch. We’re doing this as we want any of the sensors to trigger the next part. It’s also worth noting that xor switches do not consume one power like their cousin the or switch, thus why this actually works.

If they were or switches, then it would depend on how many people are there as to whether or not power makes it through. Now that might sound weird, but it’s because of how the HBHF sensors work. See, they will output one power per person that they detect.

So if only one person is raiding you and you were to use or switches, then it wouldn’t make it past the first row. Whereas with the xors one power is enough to make it to the and switch regardless of how many you use.

Speaking of the and switch, the final xor switch needs to run into it and power from your main power line that we mentioned before. Now the way that and switches work is they require both input sockets to be sending power in order to push power through. However, when it comes to sending the power out, they’ll take that power from the highest input.

In other words, the and switch won’t use the one power from the xor switches. It’ll use the power coming from your mainline.

Next, the and switch runs to the set on the memory cell. From what I’ve seen, a lot of people seem to struggle with the memory cell, but honestly, it’s not as daunting as people think it is.

So for what we’re trying to achieve here, we need the door controllers to have power, and then once those sensors trigger, we want them to cut power. So we actually want to run the inverted power to our next electrical branch chain and door controllers.

Lastly, you just need to plug whatever you’re using to reset the circuit into the reset socket so that you can trigger the memory cell to send power back to the inverted power.

Done and done! That’s it from me for now. If you’ve got any questions or circuits you’d like me to do, hit me up in the comments or on my discord; the link is in the description. I’d also love to know what you guys thought about the circuit and particularly the circuit explanation.

Also, if you found this video helpful, consider swinging me a thumbs up and a sub. It really helps, and it only takes a few seconds.

Thanks for watching, and I’ll see you guys in the next video!