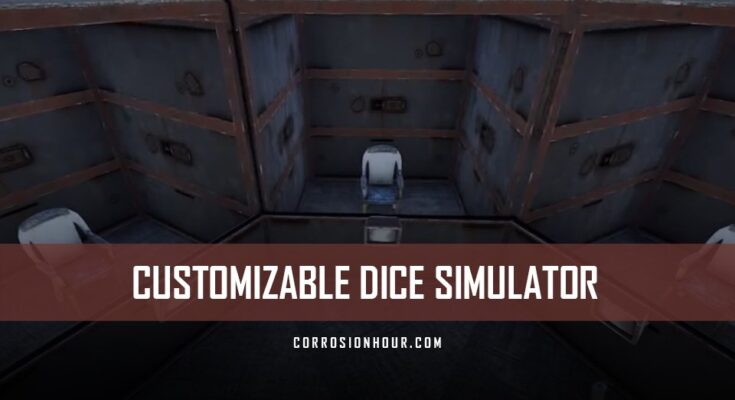 This RUST electricity guide was created by our content partner Quick Electric. He provides simplified, easy-to-follow video tutorials around RUST’s electricity system. Each of Quick Electric’s videos walks through the necessary components and their interactions. You can follow up each video with a detailed schematic that shows each of the components and how they’re integrated into the greater system.

In this video, Quick Electric walks us through how to create a customizable dice simulator. This device was specifically designed for a wheel of death mini-game, however, it can be used for other purposes provided the imagination is there! Ideal for a creative build or roleplay server in which you may want to create a unique mini-game that utilizes the need for a “spinner.”

Having a customizable dice simulator can enable players to be able to:

The customizable dice simulator is really designed for creative and role play servers, but when playing on a long wipe cycle server, it’s something extra to do. Finding electrical designs and taking the time to walk through and understand the build adds an interesting and unlikely intended therapeutic aspect to RUST. Players’ imaginations can run wild with all the possible uses for this specific device’s functions.

Before we get started on the video of the customizable dice simulator, I want to take a quick minute to talk about the server that I have recently launched to help the channel, along with allowing everyone to kind of showcase their own builds, ask questions, and contribute to one another. I’ve got a small clip here with a tour of the area, as well as some fun activities that we have on the server including random spawns of heli and PvP servers, totally customized with mods to prevents griefing. I hope to see you guys soon. The information can be found in the Discord, enjoy!

As we start this video, a lot of people have asked me how I come up with these ideas, or what the reasoning is behind these ideas. So, for this particular schematic of the customizable dice simulator, I have a practical use for it in which I’m creating a ring of death, a wheel of fortune game. Essentially, where the ring will have six players sitting down in a circle all facing each other, and the host in the middle will pull this switch, and the wheel of death will spin, roll a dice between six, land on a player after the first initial two spins, and then simply murder them until one person remains. It will eliminate the number from the pool. You’ll see that only the initial of the wiring from my prior videos has been done. And that’s where the ideas come from.

So if we come over to my creation lab over here, you’ll see the thought process behind it with a number of iterations where I first begin with what I’ve previously done, which is simply understanding how a ram works. Progressing into using a prior build of my loop and seeing if I can somehow forge it into a way that gives me a six cycle roll of the ram into the build. Had difficulties with that so then I opted for a pyramidesque kind of build, which has been unwired since I realized how much work wiring, and ineffective it was.

Then we moved on over into this atrocity, which was six independent rams that would toggle counters to a summation of a dice roll, which I wasn’t happy with either because as you see, it’s a slew of mess. But it was very close to what I was looking for. And finally we end up with the final solution, which is a loop of variant of a single ram that outputs the customizable variable into the dice roll.

So you’ll see it, because I can set the target to six here, and when I toggle the actual timer, you’ll see the roll count in the bottom right, and the top left shows the actual die hit. So, it will roll six 50/50 shots essentially of the ram switch, and then output after six tries what the total count was, which in this instance it was two. And if I showcase it again, it could be the same, it could not, but it has a variable roll of between zero and six. Now, for this upcoming game it will obviously have to have a base set of one, but you’ll see this time it rolled three. So let’s get onto the building of it.

For this build, we’ll be using six electrical branches for timers, one more switch, two counters, on memory cell, one rad cell, and two splitters. As you get into the build, we’re going to set up our defined power, which is used by two primary splitters, as well as a direct input through a branch. So let’s go ahead and wire that up right now. Splitter one, splitter two, and a branch. Now I am using generators again, as this is more-so a creative build versus a realistic vanilla build. While it can be done, it is a bit more expensive, and you will need to use either a wind turbine or an excessive amount of solar panels to be able to generate the amount of power output required.

Now we’re going to set this branch to a power of fifteen to allow output, and this port is going to remain open for now. As you move over from the right side of the schematic, you’re going to see that we have a counter followed by another branch, followed by our memory cell. Now this counter, the purpose of it is to set the amount of rolls that will be used in the build. So we’re going to have the counter progressing into the branch, progressing into a memory cell. Now wiring this, we’re going to take one of the power outlets from our splitter, come across and wire up directly into it.

So as we rewire this, the inverted output, you’ll see that it is now a completed loop. Which stops once it reaches the desired amount on the counter, which we had set to ten. We’re going to reset that to a six. Continuing on with the build, we have two more timers, which has been used in prior videos such as my automatic Russian roulette to activate a simultaneously set function of the ram switch, so we’re going to go ahead and wire both of these up from splitter. So receive power, as well as this, like so.

This branch will be our trigger for both timer A and timer B – like so. And then what we have left is our ram switch as well as our counter. So we’re going to place our ram switch directly above as to keep a somewhat organized pathway, and the counter directly above that. The ram power out will be going to our increment counter because as it has a successful hit, we want this to increment up. So let’s make that a little cleaner, like so.

We’re going to have the set function come from the output of the timer. As well as the reset function come from the output of the other timer. The power in from our ram gate is going to come from our last slot on our splitter, which we’ll go ahead and wire around this one. And then last but not least, we have the final branch out over here, which will be going into our counter power. Make sure we get a decent wire path here, like so. This will be coming from the clear counter, and then the branch beneath that will be going to the power in. So this will be our clear counter, and then the power in will be coming from the branch beneath this, which was at the beginning as a power source.

And you’ll see that now everything is lit up and wired, as with any build, it is practical and important to make sure that it does indeed work as intended. So we set the timer duration, which these need to be set as well. You’re going to set to a duration of one, and a duration of one. Every timer can now be set to a duration of one, which they are. You’re going to set the target of your dice roll, which you’re using a six sided. And then we can activate using this timer. You’ll see that it will run six loops, and if any of the 50/50s hit, they will increment up on that counter. So we can showcase it again.

Now this brings about a good point, where when you’re wiring, there are current bugs with the game where sometimes your set toggle-able such as a memory cell or ram cell are not operating as they should. And you’ll see that pretty good indicator, while it could occur, is that this is not toggling one single time, even with power inputs from both, hitting set reset. So what you end up wanting to do is picking up that ram, placing it again, and rewiring it.

Now there is no known cause as to why this occurs currently, but that’s why it’s important to test. I get lots of questions from people as to why their creations aren’t working – I followed the guide exactly and it’s still not working – well this is it, almost every person that I’ve helped so far, the error lies in the game, not the user. So I always suggest going to the portion of the build that is not currently working and making sure that it is actually toggle-able. So we’ll bring this back up and out, into increment counter, and then let’s give it another go.

So I cut the recording there simply because I kept running into the same issue. And in order to resolve it I had to completely remove the old ram switch, spawn in a new one, and then place it, which has resolved the issue. You’ll see that the wiring is exactly the same, the grand power is powered by the splitter, the set is toggled by the timer one, and the reset by output two, and then the power out is still going into the increment counter.

So as I test the device this time, you’ll see that the counter reset, and it has the possibility of actually hitting a positive. So we had a one this roll, we try it again, it resets, we’re already at a two, three, as it finishes its sixth roll. I’m not sure what causes this bug, but hopefully it will be shortened out by the developers as the game progresses with its electricity. Anything that you want to wire from this contraption can be wired from the pass-through of the counter above to whatever degree you’d like.

As with any video I welcome you guys to join in the discord, as well as the brand new server. I think you guys for your continued support, as we recently broke one thousand subscribers, and I wish you guys the best day.