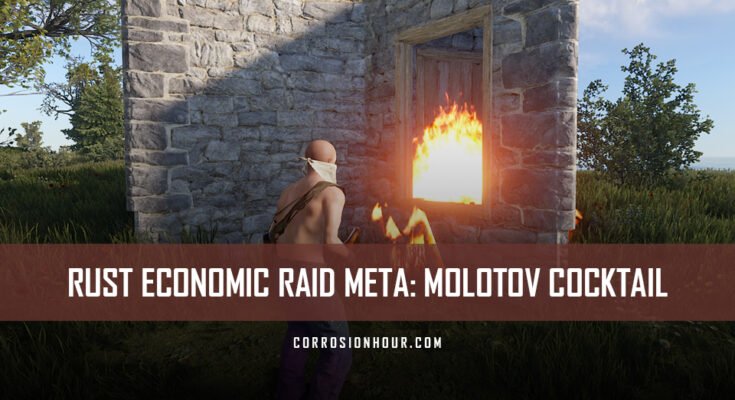 Who knew throwing fire could be so much fun?

Much can be said for the appeal of early-game raiding; taking out a close neighbor quickly, utilizing their base as an additional flanking spawn point, and stealing vital early-game resources – what’s not to love? But what is the most efficient way of pulling off such a caper?

While there are raiding guides and tip tutorials all over the internet, very few have done justice in adequately describing the newest early-to-mid-game weapon in the eco-raid arsenal; the mighty Molotov Cocktail (molly).

So what exactly differentiates the molly from every other raiding tool? Why not keep using the gold standard Flame Thrower and call it a day? Surely, Facepunch wouldn’t introduce a blueprintable item that is more efficient than its counterpart items at a fraction of their cost, would they? Even if that were the case, they certainly wouldn’t alter the delivery method to be most instantaneous and widespread, right?

That is exactly what the molly is. Before we get into the raiding utility and uses, let’s start from the ground floor with a side-by-side comparison of its early game acquisition and craftability. Acquiring the molotov cocktail in RUST

The molotov cocktail follows almost exactly the same path down the Tier 2 Workbench tech tree as its antiquated flame thrower cousin, with one notable exception; it is a whopping 250 Scrap cheaper. While this might not seem like that large of a difference, wipe-day resources are often few and far between. That 250 scrap could be of much more use spent in other trees on other blueprints or, better yet, on more low grade fuel.

While the workbench requirement is the same, the molly takes far less to craft than the flame thrower. Aside from 10 Cloth and 50 Low Grade Fuel, there are no other farmable components required.

In an apples-to-apples comparison, that is an upfront savings of 50 fuel, as well as 15 High Quality Metal, 6 Metal Pipes, and 2 Empty Propane Tanks that are optional to create a better-functioning product. Some of these components are highly sought after on wipe day on their own, so not requiring them is a huge plus.

Molotovs are also considerably more disposable if your raid is countered, taking a small hit in the form of cloth and fuel instead of the cost to recreate a new flame thrower (not to mention the extra fuel that you’d need to carry to refuel the tool). Best of all, the fire stays where the molotov cocktail breaks. Flamethrowers are renowned for their flames trickling downhill. Molotovs don’t suffer from the same defect.

Both the molly and the flame thrower burn things very well – this point is not in question. The difference is the primary delivery method and the secondary utility.

The flame thrower is an equippable, fuel-driven weapon that expels flames from a nozzle tip in a cone outward from the using player. It has a particular aim cone between elevation changes (think the ground and a foundation) or around door frames. You are limited to a blast duration equivalent to a maximum of 100 low grade fuel worth of squeeze time. At the end of such time, you must reload and be unable to defend yourself for a brief period. The range on the flame thrower leaves a great deal to be desired, as does the minimum safe distance that a player must be from their target to not take direct, intense damage.

The molotov cocktail, on the other hand, is a thrown weapon similar to the very reliable F1 Grenade. Upon impact with any solid structure or player, the molotov cocktail explodes into a puddle of flame roughly the size of a square foundation. This pool of fire will burn for approximately 20 seconds, destroying or severely damaging any burn-susceptible entity in its wake. Its greatest strength over the flame thrower is the speed at which it decimates targets. A single molotov cocktail thrown at a Wood Double Door, will obliterate the defensive structure in a matter of seconds. The delivery method is completely silent to those out of immediate earshot and, most importantly, can be done from a safe distance without the risk of the throwing player being burned.

They are also highly effective against any other wood structure, electrical component, or trap that they come in contact with (please reference the destruction chart near the bottom of this guide). Although possibly a bug, they also partially function underwater, dealing considerable impact damage to players or NPCs that they hit and a brief second’s worth of burn damage before dissipating.

Final thoughts on eco-raiding with the molotov cocktail

While not the end-all greatest raiding tool late game, the molotov cocktail definitely has the chops to be a prized asset in an early-game raiding arsenal. Even long into the wipe, its utility for destroying Auto Turrets or Large Solar Panels from range is unrivaled by any other tool except the Incendiary Rocket.

They are also handy as raid defense tools, granting temporary slowing, high-damage walls of flame to prevent entry into a door or dropdown. If you haven’t had the chance to go out and try these beautiful bottles of mischief out for yourself, consider this your call to arms the next time you load RUST up.

Please find the destruction chart below: