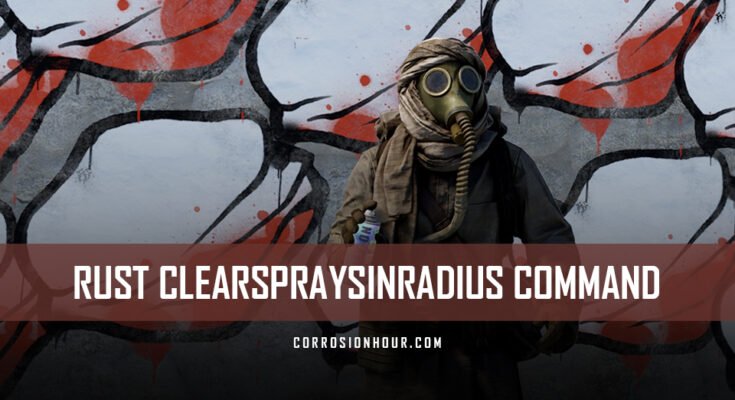 The RUST clearspraysinradius command is a RUST server command that allows admins and moderators to immediately clear all sprays within a specified radius of their character upon issuing the command. As this is a destructive command, once it is issued on the server, it cannot be reversed.

RUST Spray Cans were introduced during the Arctic Update and received subsequent follow-up modifications with later updates, such as the Combat Update. There are a few admin commands and convars associated with this item that help server administrators moderate and control how the sprays work across a RUST server.

Unfortunately, any item that allows players to create visuals in-game can and will be abused, quicker than one would think. So it’s important for server admins and moderators to understand how to reverse abusive actions connected with the spray can.

The clearspraysinradius command is currently the most surgical method available for removing player-generated sprays and decals when compared to the RUST ClearAllSprays Command and  RUST ClearAllSpraysByPlayer Command. Though, it still does not allow you to point at a specific spray or decal and remove them. It’s more so intended to remove a cluster of sprays from a particular area. If you reduce the radius, it can be used to remove individual sprays, but that’s not its intended purpose.

While you may think there would be an individual free-spray or decal deletion command, there isn’t one currently implemented. In addition to this, the spray can itself doesn’t provide a clear or remove function, but there are a handful of ways to remove free sprays and decals if you’re within proximity, some of which even regular players can perform without the assistance of an admin.

Here’s a list of workarounds for removing individual sprays:

A few practical reasons for using the RUST clearspraysinradius command:

Who can enter the RUST clearspraysinradius command

How to use the RUST clearspraysinradius command

The clearspraysinradius command can be issued from the in-game console only and does NOT work with the server console and 3rd party RCON platforms. When issuing the command in the unsupported consoles, no error message is displayed.

The admin using the command needs to physically be within the specified proximity of the sprays and decals intended to be cleared, otherwise, the command will not function as intended.

Before initiating the clearspraysinradius command, it’s important to understand a few things:

To use this command, open the preferred server console and type in the specific clearspraysinradius command syntax listed below, then press enter.

On success, the server chat will display: