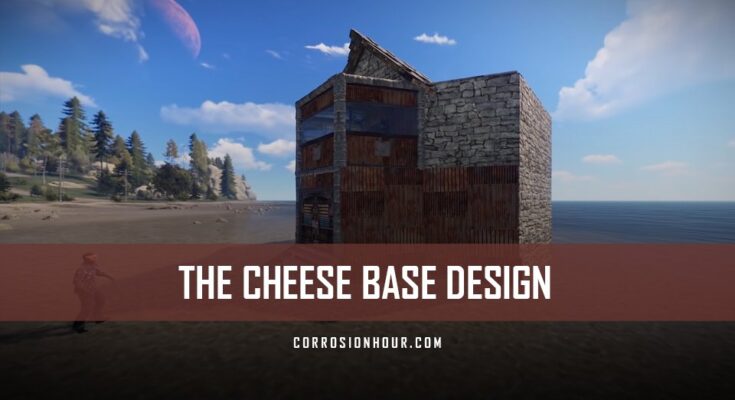 The Cheese Base Design

Wtf, the Cheese Base Design? No, your eyes do not deceive you. That really is a picture of some mozzarella cheese and a puffy rodent of sorts on our partner Malonik’s latest RUST base design video.

This unique base design uses some “cheesy” RUST exploits and tricks to help defend against base raiders. While the cover may look like a joke, we assure you this base is not. Requiring a minimum of 57 rockets and 340+ explosive rounds, if efficiently door raided, to gain access to the TC. Malonik walks through the intricacies of this base design, explaining how it’s intended to be a real pain in the ass for raiders, while also maintaining reasonable upkeep and build cost.

The base is designed so that you can start off small and work your way up to the full design. As he warns, you’ll need to be sure to lay the first foundations in an area with enough room to continue to expand the base design.

Be sure to browse Malonik’s past videos and don’t forget to subscribe to his channel to receive notifications on his latest work.

Hey guys! Mal here and today I’ve got an epic base design for you.

This base can be built and used solo or in a small group. My favorite part about it is that if raiders try and door raid it they’re going to be down at least 57 rockets and about 340 explosive rounds and that’s if they door raid it efficiently.

This design is a good balance between defense and keeping the costs fairly reasonable. I also love the fact that door raiding it is so absurdly brutal because it stops a lot of the early game raiding and less experienced raiders.

Let’s take a look inside. As you come in the airlock you’re immediately greeted with a furnace which lets you jump up. It can also be picked up when you log off, so raiders have to either boost or use a ladder immediately just inside the front door.

This leads up to a viewing area, so you can see what’s going on out the front of your base. Progressing from here the raiders have to blow two garage doors which gets them to the first major [email protected]#! Block, this window.

Now the beauty of using a window like this is the fact that you can leave the window out while you’re on and just throw it down when you’re logging off or if you start getting raided. Not to mention that windows are on par with armored doors when it comes to getting through them.

Oh and while not essential, putting the window shutters on the back of it means they can’t see what’s in store for them until they’ve already wasted some booms.

Speaking of which, once they burn the booms to get through the window they’ll see the special surprise that’s waiting for them.

Additionally, it’s extremely easy to put this defense up before you log for the night and take down when you get on, so it doesn’t inconvenience you.

The next room is essentially set up to entice them to waste booms getting into it. Once splash damage takes out this door they will be able to see boxes in here. That being said trying to peak in will result in them coping some shots to the face courtesy of the shotgun trap.

This room is for your level 2 workbench and some storage for stuff you don’t particular care about such as excess stone or charcoal and they can also be used as drop boxes.

After another garage door we hit the second roof which as i mentioned before is a ton of booms to get through. From there we go down a ladder hatch and into our furnace area where raiders hit an annoying garage door as they haven’t got much room to work with or a good angle on it.

Oh, and once they’re through that there’s a nice set of shotgun traps to slow them right the @#$% down.

Past the shotgun traps there is a few different paths they can go and it’s up to you how you want to use this area. What you’re seeing is how we decided to use the space but feel free to change it to suit your needs.

From here the raiders will see your level 3 workbench, research table and some storage which shouldn’t have anything too important in it. They’re also going to see the suicide bunker to the left of that.

Oh, and if they make the mistake of trying to loot any of this, another sneaky shotgun trap will pop up and say hello.

Next if we head through this garage door we have a repair bench, fridge and the other wall of the suicide bunker to the right.  Sleeping bags on the floor, our main loot on the left and a few more shotgun traps to really piss the raiders off, including a sneaky one in the loot room.

Now for those of you that are unfamiliar with the suicide bunker, the concept is simple. You seal up a room upgrading all of it to armored. Always make sure you’ve got a sleeping bag in there prior to sealing it up and then you stick two drop boxes on, one going each way.

You throw your resources for your TC and your important %[email protected] like your booms in the drop box. Then kill yourself and re-spawn on the bag inside. Grab everything out of the drop box and store it.

This is how I’ve laid it out, obviously you can do it however you like but this works for gal and i as we each have a bag and we essentially have two large boxes courtesy of the barbecue and small box under it.

The massive advantage to using these is the fact that there’s no door which would be a weak spot. No matter which way the raider wants to attack this they’re stuck having to burn 14 rockets and explosive ammo to get to your TC and important loot.

So now that the tour is over let’s take a look at the cost. The figures on the screen now are to build this base fully including filling it with everything we just saw.

Keep in mind that you can always build it in stone and upgrade it later. That being said you’ll want this base fully upgraded as soon as possible. Hitting the roof blockers with the base in stone will mean the raiders will definitely go through walls and floors over the roofing.

Now let’s take a look at how we build this base.

As always put down the foundations for the full base including honeycombing. You don’t have to build it all straight away, but you want to make sure you have room to fit the full base, otherwise you’re just wasting resources.

Next, we want to get your bunker built so you can get your TC down. If you haven’t got drop boxes yet you can throw a door on this room, just make sure you only upgrade it to stone so that you can pick it out once you get drop boxes. Speaking of getting them, you can buy them for 40 scrap from one of the vendors at the bandit camp.

From here we’re going to expand out and cover most of the first floor. If you don’t have all the resources you can do this in parts by adding additional rooms as you get more resources. Also if you are missing bps like the ladder hatch or garage door replace them with twig stairs and metal double doors temporarily until you get the bps.

Once you’ve got the first floor done and have the resources to continue we are going to add the second floor. Again this can be done in parts like the first floor.

Next we’re going to add the viewing deck and the front entrance to the base. Make sure that you upgrade the wall frames here and here to metal otherwise raiders will skip the front door and just come in through here.

Now that we have finished the second floor and entrance we are going to add a layer of honeycombing around the entire base.

It is very important that the corners around the base are upgraded to metal.

Now that we have the structure done it’s time to fill the base with everything you need. What i’m currently doing is the layout that gal and i both liked however don’t be afraid to change it to whatever you like.

It is very important that you put down rugs here to help hide the fact that there is an armored roof. You don’t want to make it easier for raiders to figure out where to hit with their booms.

The only things that are set in stone are the doorways here and over here as they’ll be used for the roof blockers.

I always recommend adding as many shotgun traps as possible to a base in order to slow down and piss off raiders. Placing shotgun traps here in particular is an excellent spot as they can’t be peaked or drained easily.

The only issue with them is that you’ll have to pick them up in order to put the roof blocker in and then put them down again. Although it’s a bit of a pain in the ass i still highly recommend doing it.

So the way this works is very simple, place a half wall here and make sure you leave it as twig. Attach roofing to the half wall like this and upgrade it to either metal or armored.

Personally i’d go with metal most of the time unless you have suspicions that people are going to offline you.

Keep in-mind that you’ll be destroying and rebuilding this on a daily basis so it will add up fast if you do it in armored all the time.

Now we’re going to do the exact same thing over on the other side to block the other doorway upstairs. First get your half wall down in twig, then attach your roofing to it like this and then upgrade it.

Your base is now secure and locked down for the night. Log off, eat a sandwich, play Runescape, do whatever the @#^$ you want. Then when you come back online you just knock out the twig half walls and your base is unlocked and ready for you to use.

Rinse and repeat each time that you’re logging off for a while to ensure your base stays as safe as possible.

Well that’s it for this base design. If you liked it don’t forget to smash the absolute @$^& out of that like button.

Oh and if you’re new here why not sub and click the little bell so you can watch more awesome videos from me in the future.

Lastly I’ve got a discord server where we talk @#%! And play games together, link is in the description if you’re interested.