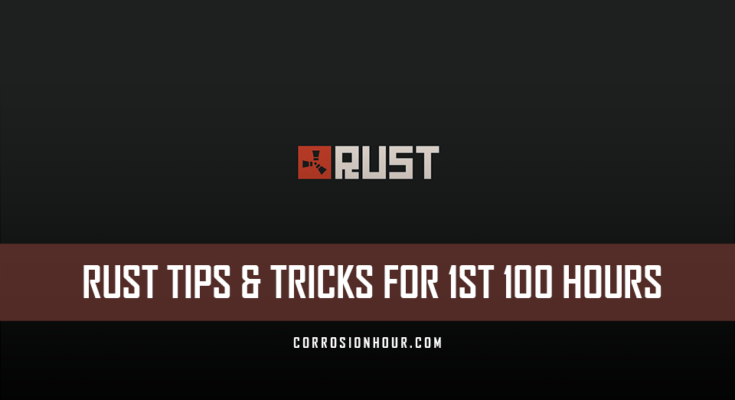 In this RUST Tips and Tricks video, our partner xRaw walks through 10 tricks you may not fully be aware of yet and is targeted more towards players with a few hundred hours under their belt. RUST can be difficult for new players because of its steep learning curve.

RUST has many niches inside itself, such as the electrical and building systems, which may appeal more to some players, versus, the PVP system. Whatever it is that interests you the most about the game,  it’s important to have a well-rounded knowledge because whether you appreciate them or not, there are concurrent systems around you at all times.

Having an edge that helps you survive the harsh world of RUST is the name of the game. Remember, it’s the person who can outrun the bear that lives on!

In today’s video, we’re looking at some tips and tricks that will help you in your first few hundred hours playing RUST. While this is mostly focused at new players, some of these may be relevant to some of you with more hours in the game. Be sure to comment any tips that you feel that I’ve missed or any that help you on a regular basis and you think may be helpful to others.

Tip #1 is choosing a server.

When choosing your first server to play, you may want aim for a less than 100 players. Or maybe even less than 50 players. This way, you can progress quicker and learn the mechanics of the game easier without getting killed too many times.

While you might think that playing on an official Facepunch server would be the best option, these servers tend to be highly populated with much more experienced players, have no group size limit, and tend to have a slightly higher chance of you running into hackers.

It’s usually best to look through a community server or a modded server with active staff who will monitor the players and ban hackers, cheaters or anyone abusing the group size limit, giving you a more fair chance. If you are finding it a little slow to progress, then you can try moving on to a 2x server instead for a slightly sped up Rust experience.

I wouldn’t recommend going any higher than a 3x server, otherwise, it’s not really Rust. You can check all of this information in the server’s description in most cases just by clicking on the server in the server list.

Rather than trying to develop the PVP skills in game using items you’ve worked hard to farm up, you can practice pvp on training servers or sandbox servers. You can choose any specific weapon on many of these servers or you might spawn with all of them, allowing you to practice with whichever you want.

Remember, the tier one weapons are the easiest to get hold of in game, while tier three are the hardest. It’s probably best to focus on the lower tier weapons to begin with and move up as you progress.

You can check the tier of the weapons from the crafting menu if you aren’t sure, or do a quick Google search.  Personally, I’d recommend focusing on the bow, because you’ll use this at the start of every wipe. Being good with the bow can get you a good head start.

Once you feel comfortable with the weapons, another tip would be just to use them. Don’t leave them in a box because you are scared to lose them because you may never get to use them. Plus, even if you do die and lose a weapon, it’s good experience for pvp on a real server.

Getting your first base down in the wipe can sometimes be a challenge. And dying whilst building your first base can be really frustrating, often leading you to quit for the wipe. Before you start building, it’s a great idea to ensure that you have everything crafted to build the base, such as your door, lock and tool cupboard.

I’d recommend spending some time on a creative or sandbox server to practice building a default starter base that you can use every wipe, ensuring that you get it down quickly. The more times you build it, the quicker you’ll be.

Most people use a one by two base or a two by two base. There are many tutorials for this on YouTube and other starter bases if you aren’t sure.

Tip #4 is choosing where to build.

Choosing where to build is something every player faces at the start of every wipe. Regardless of how many hours you have, where you build your starter or main base can be the difference between a really good wipe or a really bad one.

You want to build close enough to trees that you can farm wood, and close enough to a hilly area so there’s nodes to farm for stone, metal and sulfur. You’ll also want to build fairly close to a road and rad town so you can get scrap and components. But be careful how close, as they tend to be a hot spot for other players looking to PVP and get loot.

If you want to minimize the number of players you encounter, try setting in a snowy area, as many players tend to avoid these. Just be sure to craft and wear enough clothes that you don’t freeze. As you gain more and more experience in the game, you can begin to build closer and closer to the populated areas.

Tip #5 is don’t over farm before you have a base.

When you first join a server, especially if it’s just wiped, you’re going to be in the same boat as everyone else. You’re either farming materials to build your first base whilst hiding from those trying to kill you, or trying to kill the players that are farming your resources.

Don’t farm more than you need to, and don’t farm where you spawn. Run straight to where you want to settle and build a base as soon as you have enough resources. Over farming is one of the main reasons that people die early and quit, because they keep losing all of their hard earned materials and items.

If you have a base, even if it’s just a one by one, you can keep storing your loot every few minutes to minimize your losses.

One of the most annoying parts of Rust is not only dying, but having to wait a few minutes before being able to respawn in your sleeping bag. To get around this, you can make a number of bags and place them in and around your base.

By doing this, you won’t have to face long bag times each time you are killed. You can check out my other tips and tricks videos to see just how close to each other bags can be before they start to share a respawn timer.

Whilst it may seem like a stupid one, it can come in handy when you are running, farming or doing something else. If you press alt, you can look freely without changing the direction you are running or looking.

This means you can farm a node or tree in front of you whilst looking behind and to the side. You can also look around whilst running in a straight line, which is really helpful to see if someone is chasing you.

If you are finding that farming scrap on the road is not going too well for you because you keep dying to other players or you can’t find any loot, then it’s a great idea to try farming scrap on the ocean. Not as many people tend to farm scrap on the ocean, especially in the beginning of the wipe, so there’s more potential for finding more loot and a lower chance of dying. You just need to learn how to utilize the boats in Rust and it’s pretty easy from there.

Whilst boats do have a low grade fuel cost to use, you can usually cover this with breaking red barrels that you farm on the rafts that you find. This means that it’s basically zero cost to maintain your sea-faring loot runs.

If you find diving gear whilst farming, you can use these as well to collect the underwater crates which are recognizable by a floating bottle on the surface of the water. These take a little more time to get but tend to hold better components and resources.

If you’re finding farming resources difficult because you can’t find any or again, you keep dying, then this will help out. Try traveling to a more quiet area of the map to farm. The main resources that you want are wood, metal, stone, sulfur, cloth and animal products like fat to make low grade.

Cloth or hemp, is primarily found in the green areas of the map as well, but of course there’s other ways of obtaining it in the desert or mountains, such as with the cactus or recycling, but it’s a little more difficult.

Animals can be found all over the map, however they are usually sought after, so it’s best to go to a quiet area such as the corners of the map where most players wouldn’t go and look there.

Tip #10 is the honorable mentions.

If you have more than 100 hours in rust, or you have any other tips that might be useful, be sure to comment below.

Thanks again for watching and I’ll see you in the next one.