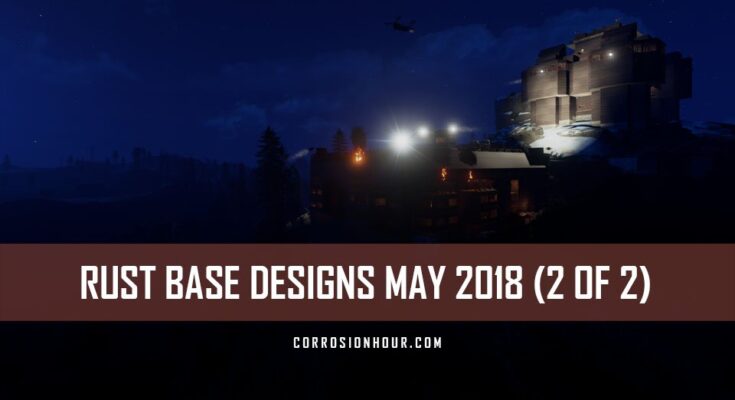 Each month Corrosion Hour gathers screenshots of RUST base designs found across the server to provide laughs, future inspiration, and lasting mementos to be shared.  For the month of May, things were a little different from our usual operations. We decided to break away from our usual pattern of wiping the map only on forced wipes, which would usually span for a month on average, sometimes two, and decided to see what would happen when we ran a bi-weekly wipe with no decay.

This lead to our monthly post being broken up as well, so this is the second half. You can find the first post here: RUST Base Designs May 2018 (1 of 2).

In addition to breaking up the wipe cycles, we noticed a substantial drop in players. Going from 1800 players in a month to around 600. With the lesser threat, we assumed bases would grow in size and see some real fortresses build up on the second half of the month, once blueprints were acquired. For the most part,  most of the RUST clans had moved on to different servers and the island was dominated primarily by solo/duo/trio scenarios.

However, two clans remained and a rivalry began to build up. Our new RUST Leader Board, which captures PVP kills/deaths and sums each player’s ratio, also helped captured the changes afoot. We noticed a few key players on the server that were thirsty for blood and pretty much dominating in every aspect.

These two clans have now formed a vicious rivalry strewn with drama and cooperation one and the same. They say to keep your friends close, but your enemies closer.

Corrosion Hour ended with a strong wipe night event that was put together by the Beckfast clan. We allowed them to take over the server on wipe night to build a special Prison Break & Hostage rescue event, which was mostly successful, barring a few items not having been cleaned up. Cough cough, a few stacks of C4 squirreled away.

All that said, the month of May, typically a slower month in the world of RUST turned out to leave us with quite a few memories, drama bombs, new enemies, and some raw PVP action. Below, you’ll find a few screenshots of the bases, and the wipe night event found on Corrosion Hour for the second half of May.

If you enjoy drama and vicious PVP rivalries, consider joining the frey on Corrosion Hour’s main server the next time!

With all that said, here are the RUST base designs left standing!