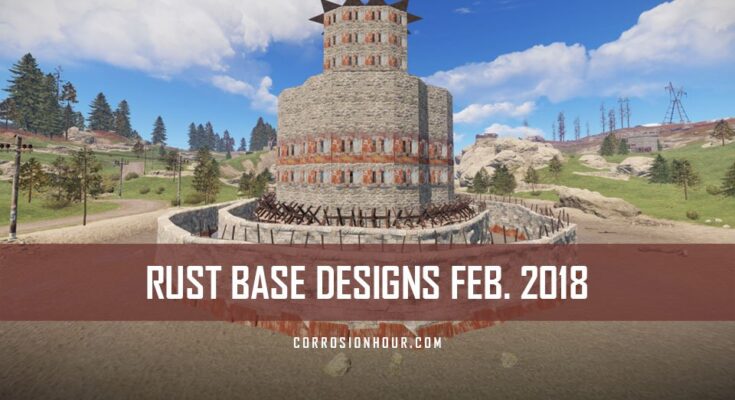 RUST Base Designs for February 2018

Each month, Corrosion Hour gathers screenshots of RUST base designs found across the server to provide laughs, future inspiration, and lasting mementos to be shared. This post allows you to browse our community’s collective RUST base designs for February 2018. You will see numerous styles of bases, from solo bases, duo bases, small group bases, clan bases, to the current trends and flavors of YouTube bases.

This month, our continued growth became a bit of a problem and again we butted up against the entity limit issues and forced us to map wiping before the monthly cycle. Due to this, we had a week long cycle that players took advantage of to build up blueprints for the current March cycle. Now that we’re 4 days into that, I can promise you the next Base Design post is going to contain some pretty crazy stuff. Some extremely motivated players this round are building up monument-sized constructions. It might be worth you hopping on to Corrosion Hour Public to come to check it out.

Anyone want to take bets that we’ll hit that entity limit again? This post contains around 400+ base designs, of the total  1200 bases that appeared. We simply did not have the time or bandwidth to capture all of the designs, we really wanted to and have made some plans to capture more of the base designs earlier around this wipe.

As to the bases captured this round, we saw a ton of clans form up. Many of the Corrosion Hour regulars have begun banding up together and forming coalitions. While many solo players have difficulty running into these groups from a PVP perspective, there are certain factions taking form each wipe cycle. It’s beginning to change the overall base designs on our server and clustering factions are moving closer to one another for safety in numbers.