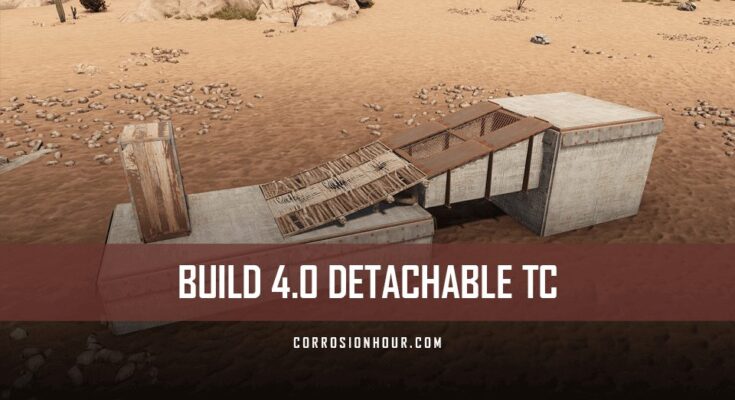 This Quick & Dirty Base Design video was created by our partner Rust Daddy.

In his video, Rust Daddy shows us his discovery of a method for replicating this functionality using the new ramp block. With a minimum of adjustments, Detachable TC designs can be modified to use ramps due to the fact that a raised ramp placed against a raised foundation does not collapse when the foundation beneath it is destroyed. Building privilege can be transferred via a trailing ramp set on a foundation. Armed with this knowledge, we learn that a twig or wooden trailing ramp can be used to keep building privilege connected, and when needed,  can quickly be destroyed to detach the building privilege.

What’s up guys, Rust Daddy here. It has been a while since my last video since I was quite preoccupied with my work. With a bit more relaxed schedule, I’ve finally found some time to make this quick and dirty format video to tell you that I am now back and already working on my next build. In the meantime, I wanted to reflect on the recent patch that brought us building system 4.0 and dramatically changed the building landscape in Rust.

As you may already know, stair foundations were entirely removed from the game and were replaced by stairs and ramps. Before the patch, an armored stair foundation did not transfer building privileges if the foundation behind it was left out or destroyed. This was an ideal mechanic for making detachable TCs or shuffling upkeep between externals. Stairs and ramps, however, do not cover the full foundation width and therefore cannot be used in the same way as their predecessor. In effect, several well-known bases like Colossus or Evil Wurst’s Trinity or Trident were rendered obsolete or at least somewhat impaired.

Nonetheless, in these dark and difficult times I am here to tell you that all is not lost, as I have discovered a little something that will mend the lack of stair foundations and allow you to keep a similar functionality with minimal adjustments. So, without further ado, it is my pleasure to introduce you the Privilege Transfer Trick using ramps.

The entire functionality of this trick relies on the fact that a raised ramp placed against a raised foundation does not collapse when the foundation under it gets destroyed. At the time of making this video, ramps do not transfer building privileges when not connected to a trailing ramp on a foundation. Given this setup, this means that one can place a twig or better yet wooden trailing ramp to keep the structure connected and destroy it to quickly detach the building privileges.

Bear in mind that the hanging ramp will collapse if the raised foundation behind it gets destroyed. In addition to that, much like its predecessor, a ramp has a soft side and therefore may be picked. For this reason, I highly recommend upgrading the exposed ramp and the foundation behind it to armored to minimize the risk of soft side picking.

And there you have it. A new method for quickly detaching building privileges for placing or even replacing your TCs. If anything, this method may be seen as superior, as the wooden ramp does not stick out and is therefore completely protected from splash or fire damage coming from outside. So, go out there, use it and share with the rest of the community before it gets patched. This was Rust Daddy and may the next wipe be ever in your favor.