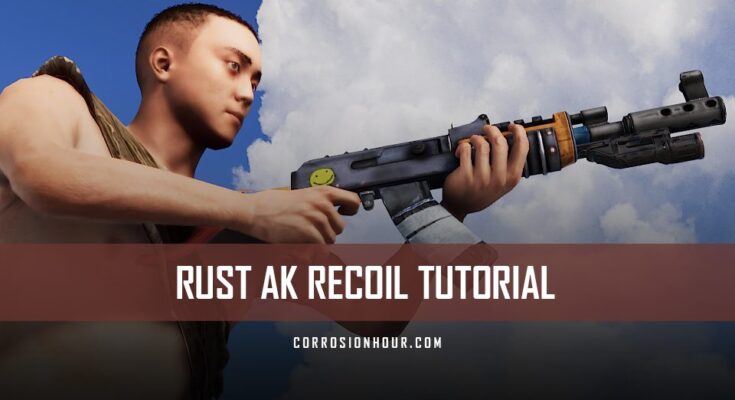 This video, RUST AK Recoil Tutorial, is provided by our partner Bushhy.

In this RUST guide, Bushhy walks through some common and not-so-common sense ideas around learning how to master the RUST AK Recoil pattern. Having watched this video, you will walk away with a few tips and tricks that can help get you on the path towards better understanding the recoil patterns in RUST and how seasoned players take advantage of this knowledge.

In addition to having the AK recoil pattern knowledge, it’s crucial that RUST players focus on warming up before risking jumping into the fray. For this very reason, Bushhy also owns and operates a RUST aim training server, Revival Game Servers. Be sure to check it out.

Be sure to browse Bushhy’s past videos and don’t forget to subscribe to his channel to receive notifications on his latest videos.

In Rust, the biggest difference between a good player and an average or intermediate player is gonna come down to how you can control the recoil of the guns that you’re using.

The AK has been notoriously known as one of the hardest guns to learn, and hopefully, in this video I’m able to help you learn what you need to know and help you so that you can get your AK to a point where you can be competitive with other players.

And I think that’s an issue that a lot of people get, you know, stuck in their head. They get the mindset that ‘Oh this person’s cheating, I just can’t beat them!’ And the moment you have that mindset you lose.

So the biggest thing is just to remember that even if somebody may have something on their computer that makes them better than you, you can be better than them if you just put down the time to practice.

Hopefully, this video gives you the tips you need to be able to do so.

Warming Up in RUST

So before we get started I think one of the most important things to grow your skill in anything is honestly to practice and warm-up. You know, if you’re just getting on to farm one day or something like that, then I understand not jumping into a server to practice your aim.

If you are looking to get better, I think every single day you need to put in practice on a server. I’m gonna take time right now to plug one of my servers.

The server in the video you’re seeing right now is actually my current service, it’s Two Tap Aim Train. We have BOTS, we have spray channels, reaction time training, we have a whole bunch of different things.

And everything on my server is here to help you grow your skill into practice to become better at the game. And if you warm up maybe an hour a day, fifteen minutes a day, you’ll slowly see that your skill level increases and you become a better Rust player overall.

So in this clip, as you’re seeing now, I’m showing the spray pattern of the AK. And one of the most important things to remember here, and it’s not very common a lot of people seem to have the wrong impression here, is that standing and crouching have the same exact recoil pattern.

They may be slightly off depending on your aim count, but in the end, the recoil pattern is the same. The first four bullets hit at the same point every single time.

So looking at the recoil pattern here, it doesn’t look as intimidating when you look at a still image of what the pattern looks like. It’s pretty simple. It’s gonna be right five, left eleven, right eight, left six.

Now the biggest thing here is to remember that you need to keep that in your mind every time you shoot.

However, there are little ways to get around that where if you just remember that the pattern is basically an ‘S’, you’re pulling down in an S shape, that’s not going to get you to the most accurate spray, but it’ll at least get you to a point where you can shoot a target at a further distance compared to spraying all over your screen.

One Shot at a Time Method

Now my preferred way of teaching people to use the AK is a pretty simple method and I call it the one shot at a time method. And basically what this method is, is you’re going to learn the distance between each shot.

So the way you do it on this method is you shoot one bullet, and your objective is to try and snap your mouse back to the original position where you were aiming to begin with.

And once you get one bullet down, you’re basically set up for your second shot. And so then you learn the two-round burst. And then from there, you’re going to learn a three-round burst and four-round burst.

By doing this, you’re teaching yourself the pattern as you practice your spray. It allows you if you need to you can use the S pattern method, but you’re also learning each bullet as you’re shooting them, and it allows you to get that spray to almost never move especially once you practice it enough.

I have over 3000 hours now, and most of my hours are PVP hours because I play modded. Practicing each bullet one at a time allows you to learn the pattern more precisely than just trying to move your mouse around and learn the pattern.

This method is proven to work for many people I’ve taught the AK to, and may of those people are as good if not better than me now.

For modded players like myself, a lot of us like to use the 4×8 8xAK, and the cool thing about this is it allows you to see it a longer distance. The only difference with the spray pattern is the fact that the bullets are more spread out.

So I actually have a mouse called the Corsair M65 Pro, I’ll leave a link in the description. It’s a Corsair Mouse, and the cool thing about it is there’s a button right where your thumb lays on the mouse, and when you hold it, it ups your sensitivity or lowers it, whichever you want it to do.

So what I do is I have it and it changes my DPI from 400 to about 1200, and it allows my spray to feel almost identical. However, I’m using the 4x so I can shoot at a larger distance.

And the cool thing about it is that it allows me to get a lot further range kills. A lot of people think there’s something going on with this guy, but really the only thing is my mouse. I’ll leave it in a link in the description to the mouse so you can check it out for yourself.

So hopefully some of these tips help you guys out, and if they did make sure to leave a like down below because I did put a lot of time into this video.

And be sure to come check out my aim train server. It really does help people who are trying to get their sprays better. And in case you’re wondering, these clips in the background are some logged clips that I had recorded on my hard drive from months ago that I needed to fill some space in the video for.

So even this LR club, there were learned using the same method, the one shot at a time method. Slowly got my LR to be very good, it looks better in the next clip, however. Whenever, not this clip, next clip.

Hopefully, you all do enjoy this video, if you did leave a like down below, make sure to subscribe if you want to see an LR video, I can always make one of those. If y’all have any questions make sure to leave them down below and I’ll answer them as soon as I can.