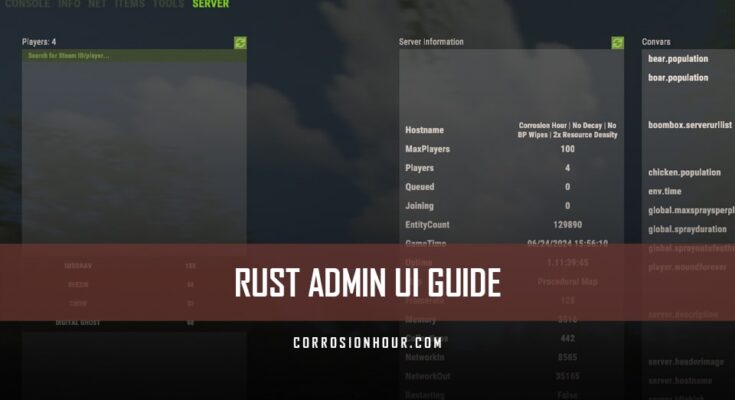 In October of 2021, Facepunch, the developers of RUST, pushed the highly anticipated Missions & Quality of Life Update to all servers. This update brought many significant, game-altering changes.

Chief among these changes was the ability to land minicopters on cargoship decks, adding the camper module to our vehicle arsenal, and putting that red siren light on top of airdrops falling at night. It also brought a new in-game Admin UI made accessible by pressing the F1 key and selecting the Server tab. This feature enables admins to modify server settings with an in-game GUI, amongst other features.

A feature release that almost went unnoticed by most RUST players, this interface added quite a few notable changes for the RUST admin community. The tools now exist in the game’s UI for admins to perform functions without remembering numerous server commands and variables. RUST admins can take action against offensive players in real time with the Admin UI. This is yet another item to be added to their personal toolbox.

Let’s first look at the buttons used to interact with the various sections in the Admin UI.

The Players section is a very efficient method for searching and sifting through the current player list, finding the party that the admin would like to investigate potentially, and having information quick-displayed at a glance. Most features of this section are self-explanatory, such as the current ping of the player next to their name, but others are more involved. From this section, admins may also use the spectate, kick or ban buttons as described above.

The Server Information section provides a brief synopsis of the server’s current overall status. Some terms may be familiar to the average admin, while others are more advanced and usually background noise at best. All of the following are used in crash reporting to troubleshoot issues.

This information is also accessible through the global.serverinfo command in the F1 console.

The Convars section of the Admin UI allows admins to set server-specific settings. Some can have immediate gameplay impacts, while others may be used to enforce rule mechanics and more. They control things as simple as chicken populations and as complex as weather patterns, ocean levels, or how the server is searchable. Like other categories detailed above, most of the convars are self-explanatory but will be detailed below.

The User-Generated Content section of the Admin UI facilitates remotely reviewing all player-created signs on the server. This allows admins to take action against offensive and inappropriate content without having to fly around and look for it or have players discover it first.

Every sign on the map will display within the interface and is browsable by anyone with administrative permissions. From here, admins may view the complete sign artist history and delete content when necessary. You cannot undo this action.

It’s important to note that this section does not include drawings done via Spraycan.