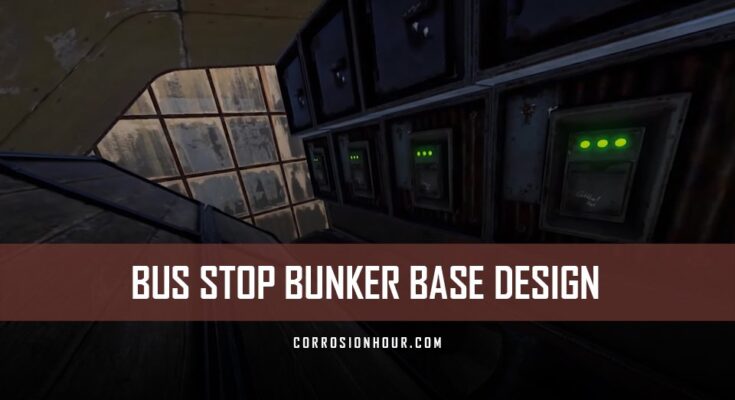 Cruxal walks through the steps for how the bunker portion is setup while providing the instructions for entering and exiting correctly. He also provides critical tips for locating bus stops on a given RUST map and walks through how to assess their build capability quickly.

The entrance of the base is designed as a drop-off point, with capacity for up to 25 large boxes and 15 furnaces. This allows for a rather convenient working area, that doesn’t require players to delve deep into the base to access the functional workspace.

The bunker entrance holds an additional five boxes as well as the tier 2 workbench. The loot room provides ten large boxes worth of space, a tier 3 workbench and also has drop boxes that allow for loot transfer into the bus stop vault.

Inside the highly secured bus stop vault, it holds 11 large boxes, the tool cupboard and a couple of sleeping bags for you and teammates. On the second floor of the base, it is an open space, allowing for total customization for whatever you desire.

The third floor provides access to the roof and allows for taking down the patrol helicopter.

Be sure to browse Cruxal’s past RUST videos and don’t forget to subscribe to his channel to be notified on his next video.

Hey guys, welcome to my first base build tutorial. It’s a sealed bus-stop base inside of a reversible bunker. The entrance is your drop off area and it holds over 25 large boxes and 15 small furnaces.

The bunker entrance holds 5 more boxes and your tier 2 workbench. The loot room holds 10 large boxes worth of space, a tier 3 workbench and drop boxes to transfer loot into the bus stop vault.

The bus stop vault itself holds 11 large boxes, the tool cupboard and a few bags for you and your teammates.

The second floor has plenty of space for whatever you’d like. The third floor is your shooting floor for taking down heli or for your pesky roof camping addiction.

What makes this base outstanding is the bus stop, which is indestructible, we use that to our advantage. The second part is the reversible bunker which can be closed either from the outside or inside. Whichever suits you the best at any given moment.

The first thing you may want to know is where to find a bus stop that you can build at. And that’s a good question, as there aren’t many. On top of that, some of the bus stops you can build in have very awkward land around them, which makes it a challenge to build around sometimes.

One location I look for right away is the swamp, this is what it looks like on the map. From experience, they always have a bus stop right next to it. Sometimes though, you might not be able to build in it because of a RUST prefab nearby, so make sure you can build in all areas around it.

Alright, so the first two foundations have to be placed slightly inside of the bus stop. Make sure your foundation is slightly elevated. Make sure that you can build out as well later on.  This will be good for honeycombing.

This will be your TC area. Place your bag next to the wall here and place your tool cupboard right in front of it facing towards the window. Make sure you put a code lock on it and lastly some large boxes. Seal it up.

Next, we have one of the vault loot rooms. What I like to do here is put a foundation outside, half wall and put some boxes. Once again, make sure you put a code lock on every one of them.

If you’re wondering why we’re putting code locks on everything and you get raided and someone accesses your bus stop, they won’t be able to loot your boxes. They’ll have to break them.

Continuing on with the base. What I am going to do next is honeycomb this part right away. And what that is going to do is stop people outside from trying to loot your boxes inside. In this room, you can place up to 8 boxes, 7 if you’re a duo, and 6 if you’re a trio.

With the size of this base, I advise being a trio. Next, we’re going to build a bunker. Make sure you do this exactly how I do it, or else your bunker won’t work.

These two foundations here have to be lower, and we’re going to make some fake foundations. This is going to help with the stability otherwise the bunker wouldn’t work. Now let’s upgrade everything.

Make sure you upgrade your fake foundations outside when everything is good. I like to go on the roof here and place some triangles. By placing the boxes from the top, you’re able to put six boxes instead of five.

Once your box is replaced, go ahead and upgrade. Seal everything up.

This triangle is going to be the axis to your second and third floor, so let’s go ahead and put a door on it. This roof access is on the other side of your bunker, so you don’t have to be scared about people going from top-down.

The bunker is now safe.

At first, the base is going to look like a mess, that’s alright. Let’s go ahead and make the honeycomb which is going to serve as a drop-off area.

As you can see here, I’ve placed the boxes before sealing off the top. If you don’t feel safe doing that like this, it is easily doable with a complete seal up, so don’t hesitate to seal the roof and place your boxes afterward.

Now we’re going to add doors that we should have added more than a while ago. You might be wondering what purpose the garage doors serve, as raids can just break boxes and climb on stop.

While this is true, not everyone will see and think it’s fully open and second, if raiders think the fastest and best way into your base is through the garage doors, they’ve already lost. The doors are there mostly to stop campers and opposing players from going deep into your drop off area.

With that, we’re going to build the rest of the base, which is the second floor and the shooting floor.

By designing the second-floor loot room like this, they will need to blow through an addition sheet metal wall or floor, which makes the bottom chest much more secure. This is also where you’ll want to put your repair bench and research table.

Now I have a few important tips for you.

The first one is to make sure you upgrade these parts of the base to the high-quality metal as soon as you can get it. It will make your bus-stop base twice as strong.

The second tip is to make sure your roof is secure. Since it isn’t a tower, it’ll be very easy for opposing players to camp your windows. So make sure you eventually have your base compounded with a couple of turrets sprinkled on top.

The third tip is to always close your bunker when leaving for large roams. It barely costs anything and could potentially save your base if someone tries to raid you while you’re busy on the oil rig.

The fourth tip, put reinforced glass windows on your loot rooms before you log off. Each window is about the equivalent of a stone wall. It’s cheap and it works well.

The last tip, if you don’t have ladders to reach your second and third floor, use furnaces until you get the ladder blueprint.

But Cruxal, you didn’t mention how many rockets it is to my loot. Alright, you’re right. Let’s assume raiders are using rockets. It takes 24 rockets to blow straight to cupboard if they can guess where it is, but that won’t give them any loot.

That’s if you didn’t pack all your gunpowder next to TC. 24 more rockets to get to where you’re two or three workbenches are. 16 more to get into your bus stop vault and 16 to 24 rockets for all of the second-floor loot.

And lastly around 9 more for all of the front boxes. This is assuming they go through all the right walls. My test gave me an average of 70 rockets to all of the loot in the TC.

Have fun and good luck.