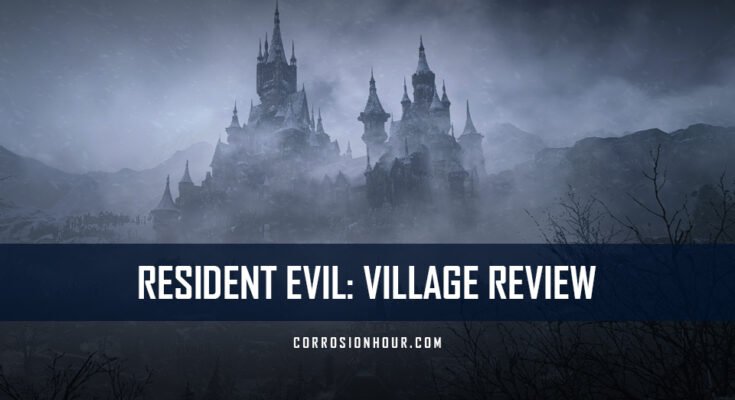 Ethan Winters is Dad of The Year

Resident Evil: Village by Capcom, the 8th official installment in the main storylines of Resident Evil, continues the journey of Ethan and Mia Winters from Resident Evil 7. But where the 7th game was set in a rural, country manor deep in the American south, Resident Evil: Village is set in an undisclosed country somewhere in Eastern Europe. It uses this setting to inspire the unique viral mutations players must defeat throughout the game.

Resident Evil: Village shines as one of the most outstanding titles in the RE Universe. It has equal measures of story, gameplay, atmosphere, and immersion. The plot twists throughout the story will prey on the most unsuspecting gamers. Yet, even veteran storytellers will find themselves shocked at the revelations near the game’s end.

Resident Evil: Village is a fantastic ride into gritty, graphic horror that isn’t afraid to take mechanics from other horror franchises to bolster its impact. 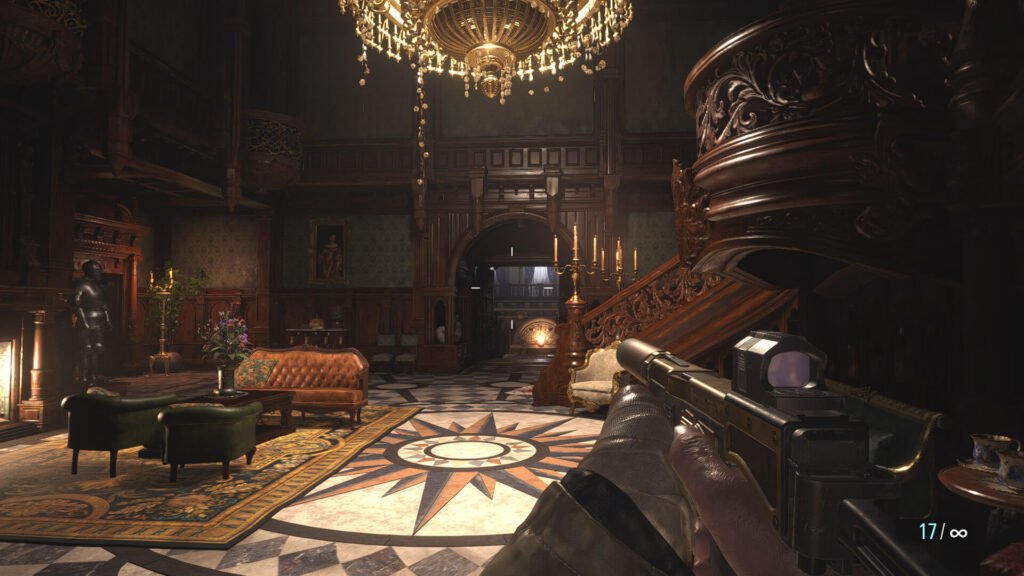 The story of RE:8 takes place three years after the events of RE:7. After the end of RE:7, Ethan and Mia are taken into protective custody by Umbrella–yeah, you read that right–and brought to a small city in what is presumed to be a country near Russia, if not Russia itself. The couple then spends the next few years trying to make a new home for themselves. They are overjoyed when they welcome a daughter into the fold, Rose Winters.

Too bad we don’t get to ask her any questions because she’s soon shot to death (or is she?) by none other than Chris Redfield. Chris busts into the house with a team of Umbrella soldiers and takes Rose, then knocks Ethan out cold.

Ethan wakes up outside in the snow, beside an overturned prison transport vehicle and several dead bodies.

The story of RE:8 is about Ethan Winters fighting for his daughter. It’s about a man who will stop at nothing–and we’re not being cliche here–to rescue his daughter. It’s about the history of the T-Virus, the very first zombie-creating viral outbreak that struck Racoon City in RE:1. It’s a game that’s personal as it follows Ethan Winters, yet broad as it ties in history and characters from previous RE games. 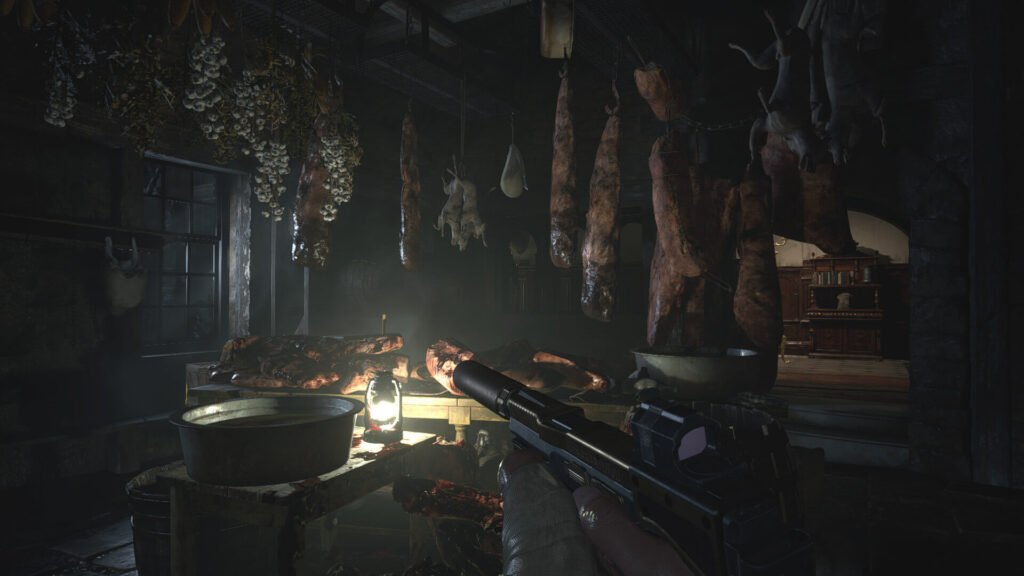 The graphics for RE:8 are just as sharp, detailed, and popping as the graphics for RE:7. Capcom developed their own engine, the RE Engine when they built RE:7. It’s since been used in several other games like Monster Hunter and Street Fighter, and now in RE:8. Everything is fluid, crisp, and clean as you explore the frightening world of RE:8.

Obviously, motion capture technology, ray tracing, and 4K have a lot to do with the overall results that a player will experience when running through RE:8. But even the most rudimentary rig should impress gamers. We found ourselves floored at the minute facial expressions we picked up on characters, that we could count pores on a person’s face, or that slime and gore actually looked wet, sticky, and just plain gross.

RE:8 does a beautiful job of wowing players with its visual presentation on a macro and micro level. Those bottles of alcohol that you find as you explore as fully detailed; at the same time, so is that massive, sprawling castle complex in the distance with crows circling over it. Everything stands out and is recognizable at first glance.

The sound design in RE:8 is more than well-crafted; it’s helpful during gameplay. When we were inching our way through dark cellars under Castle Dimitrescu, and suddenly harsh violins and deep drums filled our headphones, we knew we were not alone in those cellars. When we hunted for lei in the wheat fields outside Luiza’s house and heard squawking overhead, we knew an ambush was underway, and we were the target. We could hear the sound of rushing water before we encountered it, we could use sound alone to pinpoint where enemies were hiding, and the music only served to heighten every single encounter we faced.

The atmosphere of RE:8 draws heavily from RE:4. There’s an ancient castle, there’s a decrepit village, and there’s a rusty factory. But each of those locations has its own fully realized atmosphere. When you’re in the Factory, there’s a constant hum of machinery all around you, the doors squeak on rusty hinges, and all the enemies are metal-themed.

In the castle, the doors are all lacquered wood with delicate handles and locks, so they close smoothly and click into place every time; there’s no hum of machinery, and every step you take echoes up to the chandeliers and back.

RE:8 does a masterful job of designing each location with a unique atmosphere designed to draw players in and immerse them for prolonged periods. 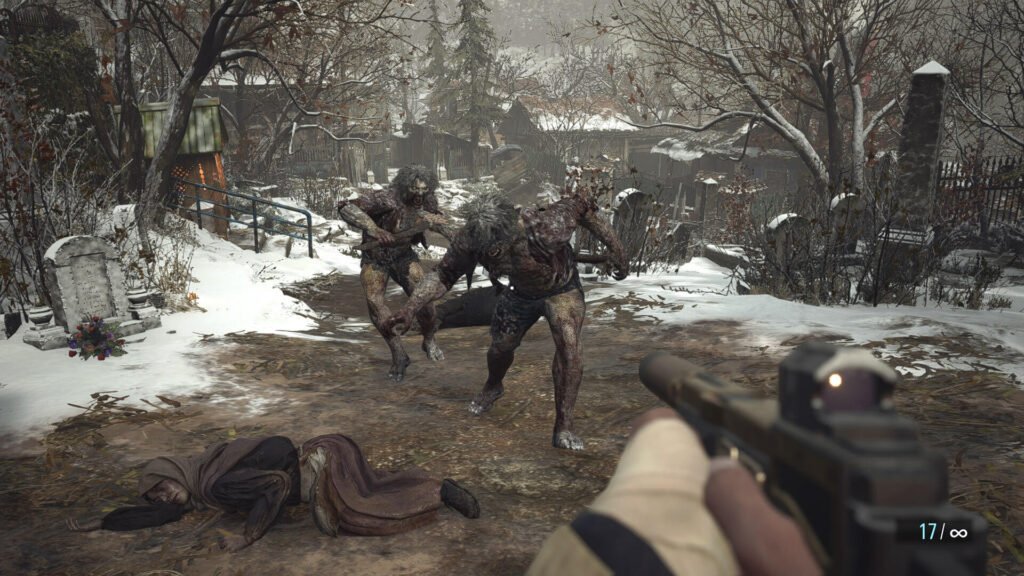 The gameplay of RE:8 is another area where developers drew heavily from RE:4. Which is to say: it’s awesome!

One of the things missing from RE:7 was a fully created merchant character. This prevented players from hitting up the merchant for more supplies whenever they wanted and served to elevate the survival aspect of the horror. But it also meant upgrading your weapons beyond what their attachments provided was not an option.

In RE:8, we have the introduction of The Duke, a behemoth of a man who sells Ethan whatever he desires. This simple addition makes a massive improvement to the game. Now, the game provided more challenges, more side-quests, and more reasons for me to collect as much currency as possible. Duke offers meals that boost Ethan’s health and defense, he sells supplies and blueprints, and he’ll “provide weapons modifications… for a small fee.”

As players move through the major settings of the game–, the Village, Castle Dimitrescu, House Beneviento, the Drowned Village, and the Factory–they’ll need to adapt their gameplay to survive. In Castle Dimitrescu, players are hunted by four vampires. But in House Beneviento, players are the ones doing the hunting. In the Drowned Village, there are puzzles everywhere, and each quest step is a thinly veiled mission to pick up McGuffin after McGuffin. But in the Factory, machine abominations of all kinds will pop out of corners and keep you on your toes from start to finish.

The gameplay of RE:8 is as varied as its plot twists. You’ll sometimes be running for life, no weapon to be found. Other times, you’ll have your back against a wall and hope you have enough bullets to survive.

RE:8, like most Resident Evil games, has an incredibly high replay value. The developers obviously want you to play the game multiple times, as there are certain–dare we say, ‘essential’–mechanics that they withhold until your second or third playthrough. Not to mention there are about a dozen weapons that unlock only after you beat the game, along with a movie viewer, and the best thing about RE:8: Mercenary Mode. You can’t play Resident Evil and not play Mercenaries!

Resident Evil: Village stands out as one of the greatest Capcom has produced in the vast and varied world of Resident Evil games. It has a soundtrack that stands above most others in the series, characters that are admirable and relatable, and gameplay elements that harken back to its glory days.

It’s a fantastic experience for both fans of the survival horror genre and the Resident Evil franchise. And the recent announcement that Resident Evil: Village is getting a DLC–Shadows of Rose–only means the game has become relevant once more.

Though Resident Evil: Village is meant to be the last time we follow the Winters family, we’re hoping it’s not the last we see of those tenacious survivors.

Get Resident Evil: Village on Steam or try the demo!