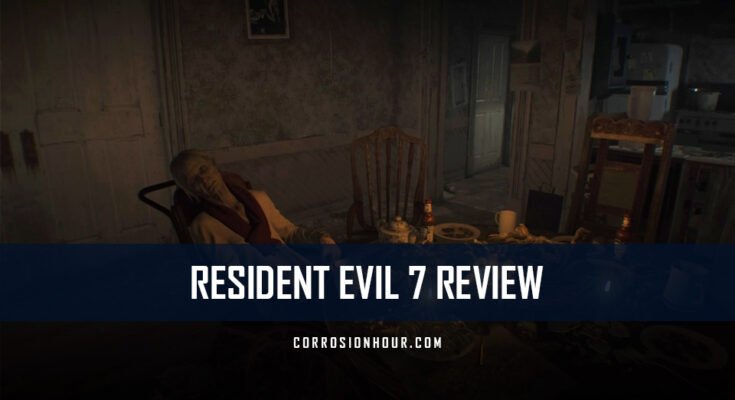 Meet the Bakers, stay for dinner, and join the family.

Resident Evil 7 is a shining example of how first-person survival horror games can still innovate by focusing on game design fundamentals.

The Resident Evil series has come a long way since its humble roots in the Spencer Mansion. We’ve explored Raccoon City in its sequels and even traveled across Spain and Africa taking down a virus gone wrong. With so many different locales, the real question was where to go from here? Enter Resident Evil 7.

With a complete overhaul of everything we’ve come to accept from the series and a new first-person perspective, Capcom once again redefines horror.

Taking place in Dulvey, Louisiana, players step into the shoes of Ethan Winter in a quest to find their missing wife, Mia. The story starts with Ethan receiving two messages from Mia, expressing her desire to see her husband and the second one explicitly saying not to come to find her.

After getting information on Mia’s whereabouts, Ethan heads off to the Baker family plantation house to find her. Upon arriving, Ethan finds Mia locked up in a jail cell. As the two make their reunion, we realize that Mia isn’t acting in her right mind, and as the two look for an escape route, Mia’s mind and body alter, and she attacks Ethan.

After fending off Mia, Ethan retreats to the attic only to find her once again attacking him. In a desperate attempt to defend himself, Ethan fights off Mia only to see her collapse in a pool of blood. 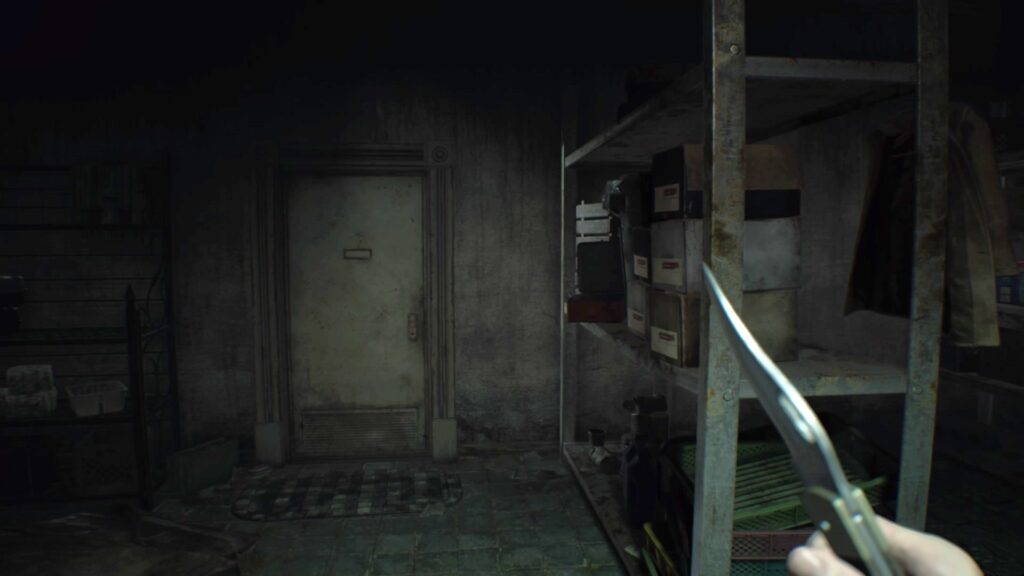 As we finally try to leave the Baker plantation, we meet with the head of the household Jack Baker. As he knocks us unconscious, we hear the infamous “Welcome to the family son!” and our nightmarish descent into hell truly begins.

The opening hours of Resident Evil 7 only serve to set up the psychological roller coaster that lies within the Baker home. We meet with each family member, and they all have their quirks and mechanics to work around.

Jack relentlessly stalks the player throughout the house and isn’t afraid to let his humor also frighten the player. His wife Margarite has an unhealthy obsession with bugs and will send an army of them the player’s way of crossed paths.

Their son Lucas is enamored with traps and games and will set up puzzles similar to the SAW movies to take down Ethan. Every character serves their role and place in the story. The concept of escaping the madhouse never loses its luster throughout the bulk of the campaign.

What makes the idea of Resident Evil 7 so effective is that, for once, we aren’t a professional member of a police force or rescue squad. We’re playing as an ordinary man trying to do the right thing, and the tone reflects that perfectly.

Resident Evil 7 excels in the graphics department, with this game being the debut of Capcom’s Resident Evil Engine. The Baker family house has a rustic feel to it with the attention to detail on everyday objects. 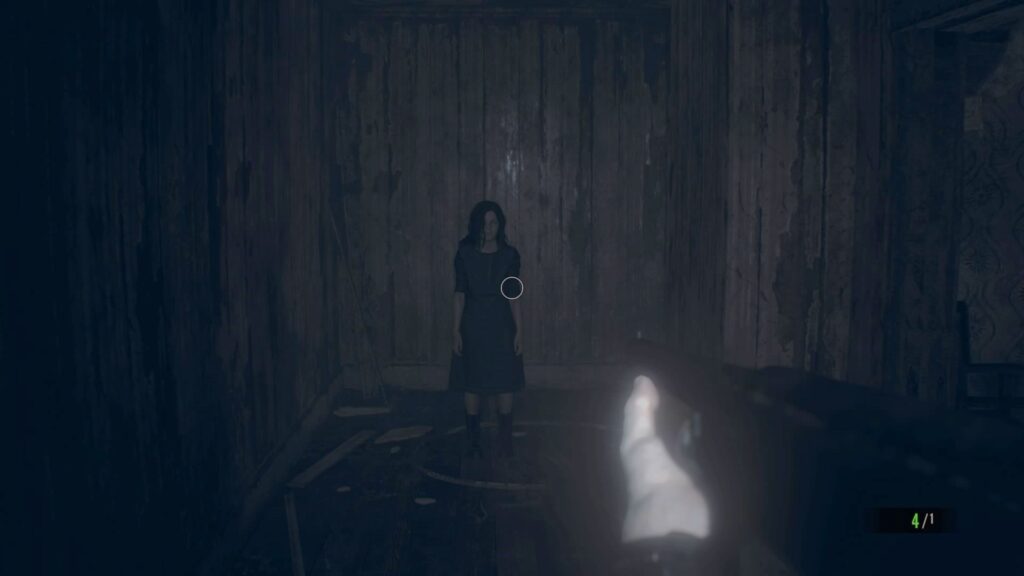 Doors have stains on the bottom of them to help add to the realism, plates, and forks are strewn with cracks in their models, and food has flies accompanying them. Character models look lifelike as wrinkles and hair follicles detail the NPC’s faces.

The lighting, along with the shadows, only further serves to immerse the player. Candles glow faintly while the lens flare of light sources obscures players’ vision. Resident Evil 7 goes the extra mile to have blood overlap onto the screen when players are severely hurt, which adds to the fear.

Monsters and bugs are animated wonderfully as The Molded; these games stand in for zombies, contort and writhe when walking.

The Molded also responds to players’ attacks and winces when hit. Overall the graphics look impressive and add to the danger, which is all the more impressive.

The sound design and acoustics of Resident Evil 7 will have you on edge as you’ll need to pay close attention to the audio cues. The stalkers, in particular, can have responses ranging from screaming to calling you out.

One such instance where the sound design and visuals did a great job was when Jack breaks through a wall that players have passed multiple times. Not only is it loud, but when combined with the eerie lighting and the fact that it preys upon unsuspecting players makes it all the more effective.

The bees in the latter part of the game made me feel incredibly uneasy as you can hear their giant wings flutter rapidly, and with surround sound, I was subconsciously looking around my actual room just to make sure there weren’t any real bees! 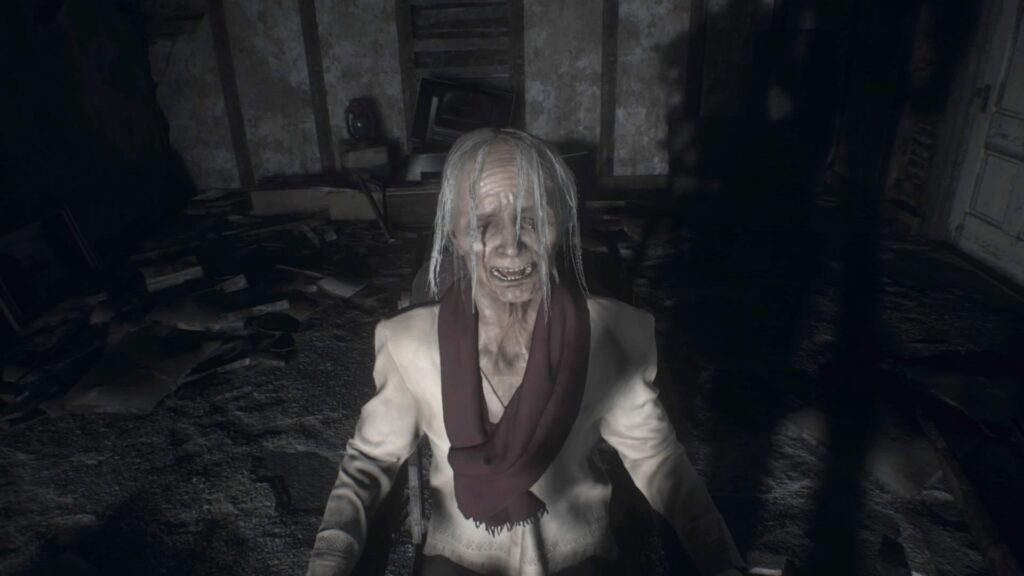 The Baker family home atmosphere offers a stark contrast between oddly comforting with the classic save-rooms and their soothing music to unapologetically unsettling with certain areas. In particular, the basement was one of these areas as The Molded infested every nook and cranny.

The basement also housed unusual oddities, such as a morgue and dissection room, which only raises further questions. Compare this to the living room and bedrooms, which don’t seem out of the ordinary in this terrible house.

In some ways, the Baker family is still trying to live some semblance of their lives despite the insanity. The house feels believable enough to make sense, given the context, and just as surreal, given the game’s tone.

Resident Evil 7 does what early entries in the series do best, giving us a tight, cohesive horror environment to survive. The Baker home is similar to the Raccoon Police Department of Resident Evil 2 fame in that players will need to find keys and solve the twisted puzzles laid out before them.

Some of my favorite puzzles are the collectible videotapes you see throughout the house. These tapes serve as both a means of conveying what is happening to other characters in the plot while also providing Ethan with a much-needed solution for the more cryptic puzzles. 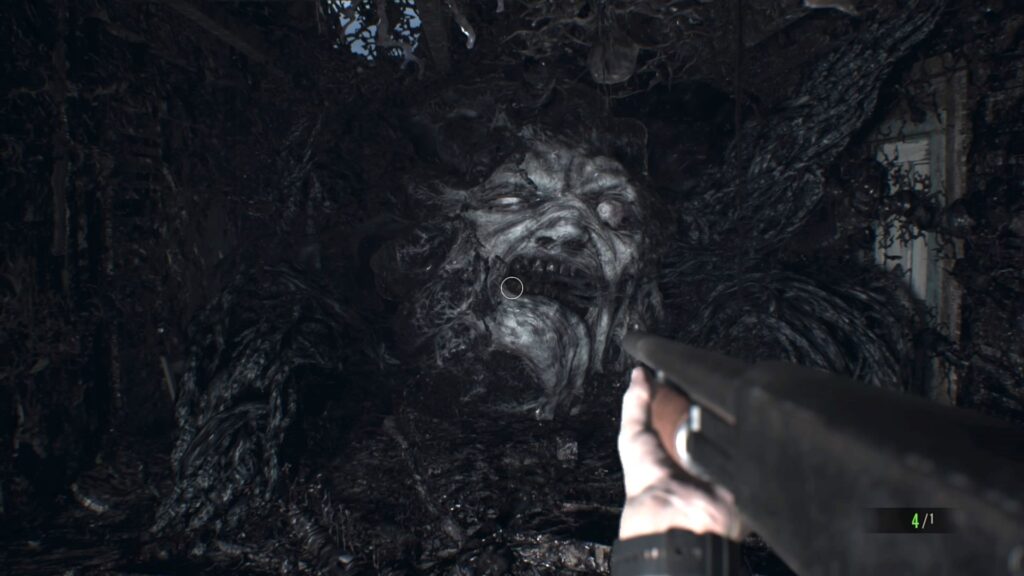 One primary task is inventory management, as you can only hold so many items at any given time. Thankfully, safe boxes are littered throughout the house and can ease the burden by allowing you to deposit items within.

Players will also find collectible coins that you can use to upgrade either your weapons or maximum health when far enough in the story.

Throughout the house, the stalkers you’ll encounter are the highlight of the gameplay as they’ve taken inspiration from some of the best monsters throughout Resident Evil history.

While Jack may not be brandishing a rocket launcher like Nemesis from Resident Evil 3, don’t let that deter you like this car driving, chainsaw-wielding maniac continues to come back from the grave to haunt you.

The game has multiple boss encounters and all of which are increasingly tense as you’ll have to balance out ammo and health usage throughout. Resident Evil 7 does a superb job at keeping the classic elements of the gameplay we’ve come to know and love and masterfully incorporates it within a first-person setting.

The most substantial contributors to the replay factor in Resident Evil 7 are the hidden collectibles. Without a guide, it can be quite the journey seeking all of these out, but they come with their rewards. Achievements and trophies are aplenty as they reward players for seeking out different playstyles.

By far, the most exciting aspect of Resident Evil 7’s replay factor comes from the unlockable “madhouse” mode. If you thought dealing with the Baker’s before was hard, try doing it without any checkpoints and limited saves.

Ammo is even harder to find, and critical items are in different locations, which will throw off even the most seasoned players. Stalkers and enemies are even more aggressive, which makes the game even tenser.

There’s plenty to do in Resident Evil 7, and with plenty of DLC, you won’t be leaving the Baker estate anytime soon.

As someone who grew up with the Resident Evil franchise, it has been an incredible ride seeing its humble roots evolving into its current state. We’ve gone from fixed camera angles to an over-shoulder perspective to seeing the game directly through our player’s eyes.

Resident Evil 7 is a shining example of how first-person survival horror games can still innovate by focusing on game design fundamentals.