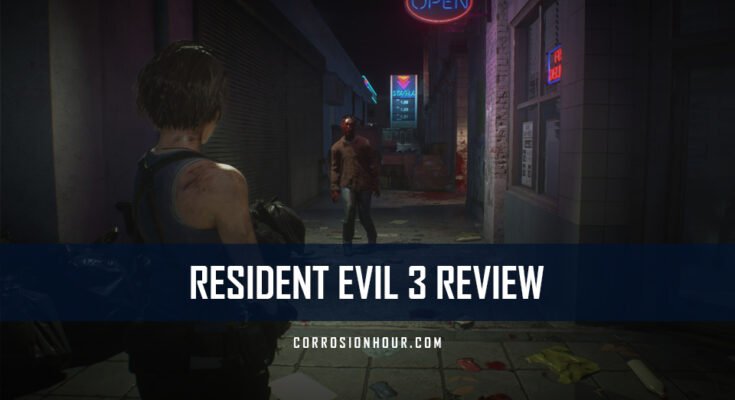 Picking up after the harrowing events of Resident Evil 1 and 2, Resident Evil 3 follows Jill Valentine on her quest to connect the dots of each game and their subsequent viral outbreaks. Her ultimate goal is? To lay the deaths of everyone affected by those outbreaks at the feet of Umbrella Corp.

Unfortunately, Umbrella knows Jill knows about their experiments. And Jill knows that Umbrella knows that she knows about their experiments. So, while Jill plays whistleblower and informs as many people of Umbrella’s wrongdoings as possible, she’s constantly hunted by Umbrella’s latest pet project: Nemesis. This neverending tension brings a sense of relentless adrenaline to Resident Evil 3 that’s not as well done as one might hope.

Resident Evil 3 departs from standards and norms established by other Resident Evil games, not in a good way. We were frustrated early on in gameplay, low on ammo and health, and quite sure we were doing something wrong.

Once we figured out what the game wanted from us, our experience smoothed out. Still, we couldn’t help but laugh at the juxtaposition of RE3 against RE2 or even RE7; the gameplay, the puzzles, and every enemy you encounter are so different.

We hate to say it, but RE3 may be closer to RE6 than any other game in the franchise, which isn’t necessarily a good thing.

Jill Valentine is one of the S.T.A.R.S. officers from the first Resident Evil game. That game involves a viral outbreak in the Arklay Mountains at the Spencer Mansion and is the first time people discover and interact with Umbrella’s experiments. Jill survives the events of the RE1, along with several of her fellow S.T.A.R.S. officers, though they carry heavy trauma with them. 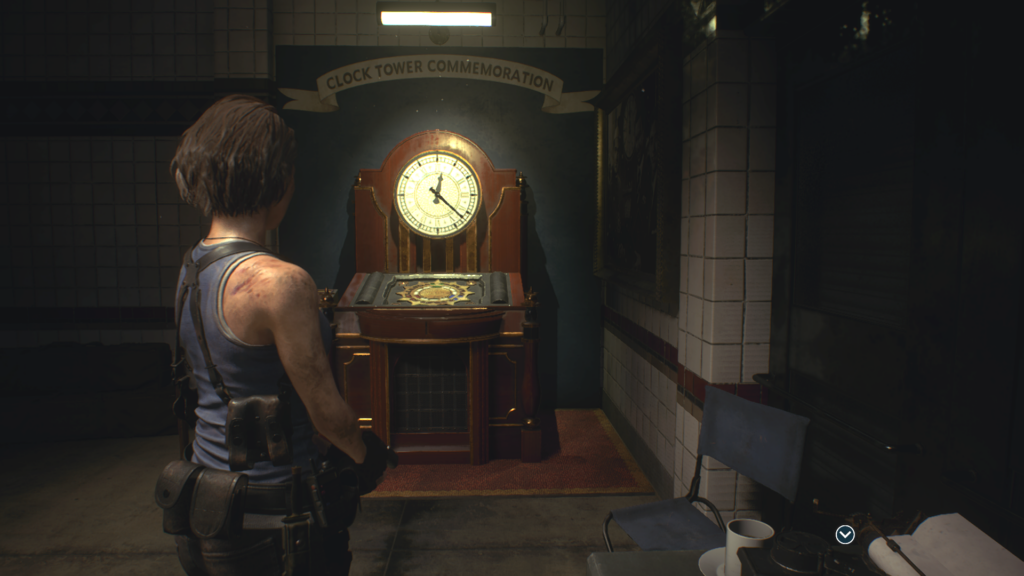 Jill’s not been doing well since the events of RE1. She’s been put on leave from her department for asking too many questions about Umbrella; she’s having nightmares about becoming an infected zombie herself; she’s been losing sleep trying to gain as much information about the events of RE2 as she can. All of this paints Jill’s current life as more than a little chaotic.

The game starts with Jill in her apartment, living another day in the life of someone with intense zombie PTSD. Her monotony breaks when a 7-foot-tall biomutant crashes through her door and beats six shades of shit out of her.

And just like that, we’re thrown into the gameplay.

As Jill navigates a city that was not gripped in zombie terror just minutes ago, she encounters members of Umbrella’s Biohazard Countermeasure Service or U.B.C.S. These elite, badass soldiers have differing knowledge of Umbrella’s involvement with the outbreak. As the story progresses, players discover which agents are on their side and which agents are loyal to Umbrella. All while constantly dodging that prick of an enemy, Nemesis.

The story of RE3 is shorter than other installments in the franchise of late. That brief story makes RE3 feel more like a DLC for RE2 than its own realized title. And the plot is constantly highjacked by Nemesis whenever something important is about to happen. 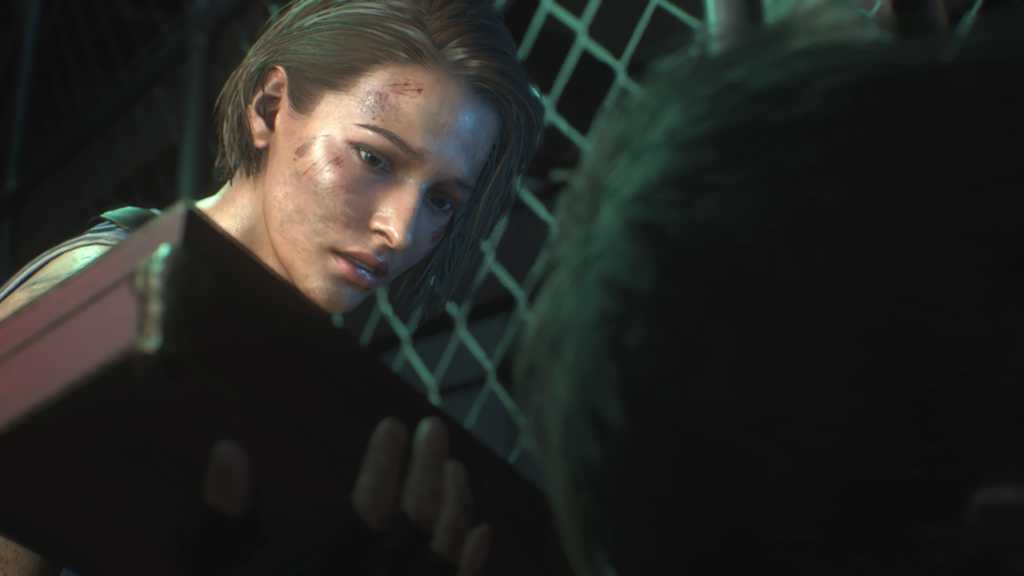 There are few beats in the campaign of RE3, which makes the whole experience feel like one long sprint to the finish line. Even though RE2 takes place within a similarly overrun city, there are moments of downtime, moments when you know you’re safe to take stock of your inventory and breathe.

We never got that feeling from RE3’s story. Probably because it’s so short, but there’s little time to wrap your head around events or information. You just make your way to the next quest step. And the next. And the next. Until, blessedly, it’s finally over.

Too often throughout RE3 were we reminded of the abject failure that was RE6. The similarities are prevalent.

I will give this to RE3: it’s a pretty game. The neon lights adorning city streets at night, the detail of each crashed car, and the wet gore of every zombie you encounter are unmatched. I don’t know how gamers can attempt a speedrun of this the first time they play it. I was stopping at each new location and just absorbing the attention to detail everywhere.

It’s a gorgeous game when you get right down to it. 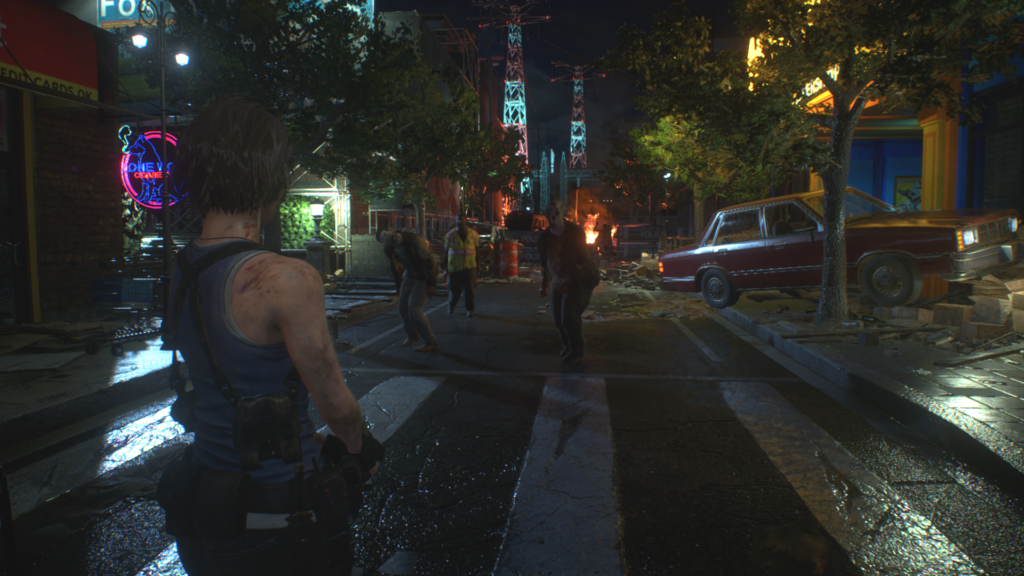 Where I found the graphics most notable was during cutscenes. The acting in RE3 is phenomenal. It outshines RE2 and RE7 by a mile. Literally, every character you encounter is brought to life perfectly by the actor. That’s not something achieved in many games; there’s always some minor character who doesn’t quite convey the same passion as everyone else. Not in RE3. Even the characters who die 90 seconds after meeting them are authentic, unique, and alive.

That level of acting, coupled with cutting-edge graphics, made me settle into my chair more with each cutscene. I just wanted to sit back and watch a movie of this game. The cutscenes are seamless with gameplay, and the crisp graphics only serve to immerse you deeper in this zombie apocalypse.

The sound design of RE3 is what you’d expect from a AAA game made by one of the best studios in the business, nothing more and nothing less. We didn’t find any standouts in its soundtrack, and we never felt more engaged because of the music. It’s not that we were disappointed in the OST. We just barely noticed it.

The atmosphere of RE3 is finite, contained, and pretty much the same throughout the game. Unlike other RE titles that create a unique atmosphere for each location in the game–factory, castle, village, etc.–RE3’s atmosphere is relatively static. 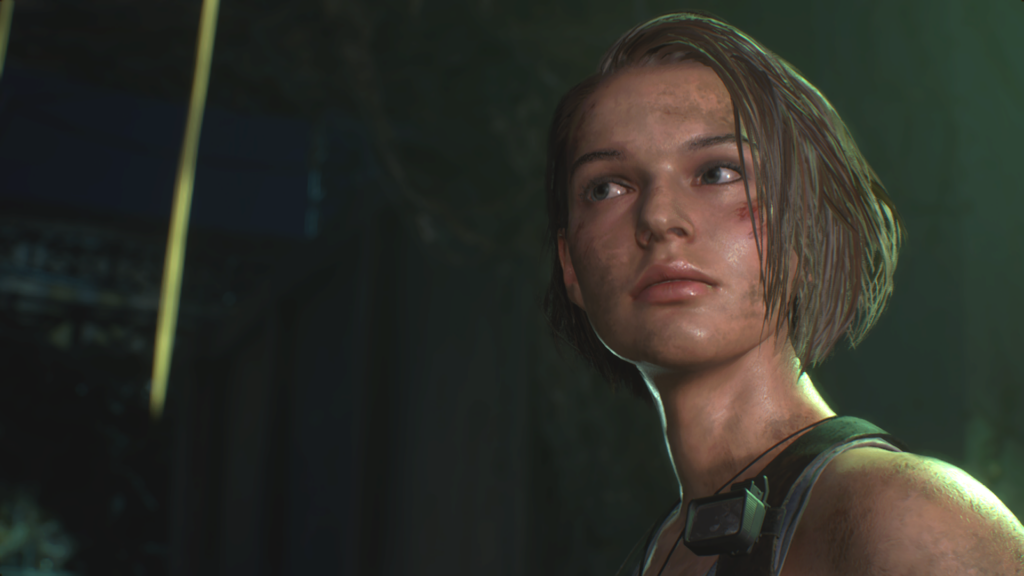 This is where we had the most frustration. We like to think we’ve played a lot of RE titles in our day, including the spinoff titles. Revelations 1 and 2, Umbrella Corps, Darkside Chronicles, Code: Veronica, etc. So, we thought we knew just about every kind of gameplay Resident Evil could throw at us.

We were surprised when we found the beginning of RE3 a struggle.

Not because it’s a challenging game. Well, it can be if you don’t know what the game wants of you. And that was our case.

RE3’s main mechanic is dodging, which is rarely used in any other RE game and certainly never relied upon as much as in RE3. In RE3, it’s all about pulling off perfect dodges, which are like perfect parries in other video games. 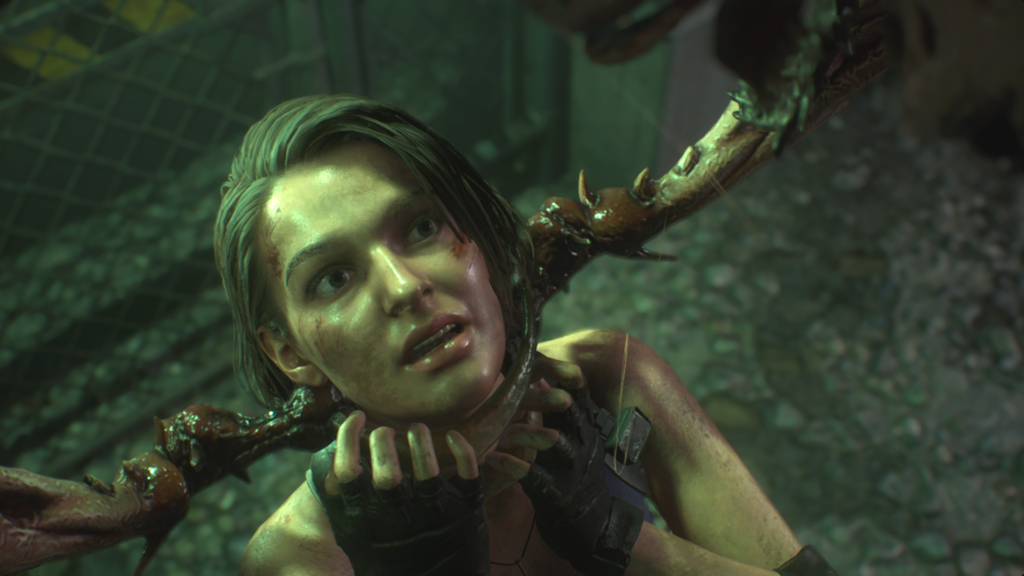 See, the zombies in RE3 are your typical slow zombies; lethargic, unintelligent, and driven by a hunger for brains. That is until you get within 10 feet of them. Suddenly they’re able to lunge great distances and tackle you like they were athletes in a past life. This is where the dodge comes in.

Silly us, we thought we were supposed to shoot the zombies. You know, since they give you multiple guns, lots of bullets, and the ability to craft more bullets. And since every other RE game is likewise about shooting zombies. It turns out that RE3 wants you to dodge the zombies.

The replay value of RE3–at least for us–is near zero. We might run through it again in the distant future now that we know how to survive. But it’s not a high probability. We found ourselves greatly looking forward to completing the game and putting it behind us for good.

We will say again, however, that the cutscenes and acting in this game are top-notch. We would watch a movie about everything that happened in RE3. But having to deal with that douche Nemesis during every minute of gameplay is not something we look forward to experiencing again.

RE3’s replay value is about the same as RE6. This means rather than play the title; you’re better off watching a Youtube video about it or reading a summary.

Alas, it also falls short of expectations brought by other games in the franchise. It’s a game that left us with emotions we didn’t want: frustration and apathy. It’s a game that is beyond beautiful in its presentation but more than lacking in its gameplay.

That said, if you’re an RE buff like we consider ourselves, this is a must-play title. And now that you know it’s all about dodging, you won’t suffer nearly as much as we did.