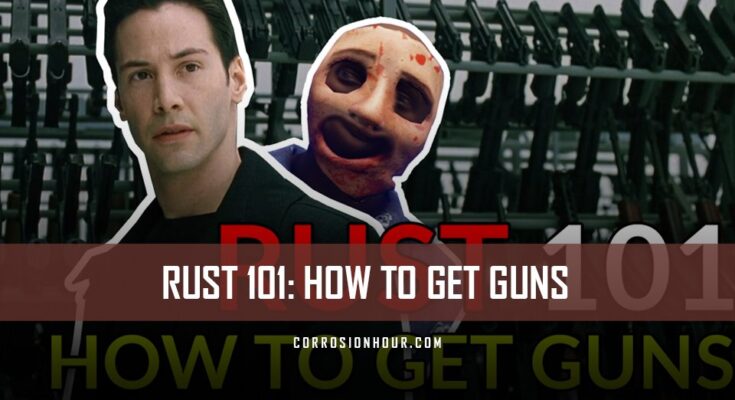 Hey everyone! We’re back again with another video, RUST 101: How to Get Guns, from our partner in crime Malonik. This video is a continuation of his RUST 101 series, designed to get new players up to speed with the basics of RUST.

This video covers numerous methods for acquiring guns in RUST, which for new players can be very daunting. Not knowing where to go, when to go, what to expect, and how to actually pull it off.

Check out video out below and be sure to subscribe to his Youtube channel. We’ve also provided the links to the other videos in this RUST 101 series.

Transcript of the Video

I’ve had a lot of people thanking me for the rust 101 series and asking me to continue it. In particular there seems to be quite a few people asking about getting guns.

Guns are obviously a crucial part to your survival in rust. They can be a game changer especially if you get them early enough in a wipe. So how do you get them?

There are a number of different ways to get guns. None are particularly better or worse than others. It just comes down to your play style and what will work for you.

With that in mind I’m going to run through the different methods explaining each of them and it’s up to you to decide which way you’ll do it.

The easiest method and what i suggest you start with is experimenting on your workbench. With a level one workbench you can get the revolver, waterpipe shotgun and the double barrel shotgun. You can also get metal tools, beancan grenades and satchels via this method.

The downside to it is that there’s a bunch of less useful items which you can get from this. So depending how lucky you are you might get them quickly or it might take more time and way more scrap then you would have liked.

While you’re farming barrels and boxes for scrap to experiment with you’ll hopefully encounter the second method for finding the guns. You have a chance to find the items i mentioned before inside boxes. If you do find one immediately run it straight back to your base and research it so you know how to make them.

Now moving up from that tier of weapons i wouldn’t personally recommend continuing with the experimenting route. It is a viable option however the tier 2 workbench costs 300 scrap per experiment and the tier 3 bench is 1000 per experiment.

So this option is only really open to small groups or people that reeeally like farming and zergs.

With all experimenting it’s important to remember that you won’t get a blueprint for something you already know how to make. So if you’re with a small group you’re better off getting one person to learn everything. Just make sure that person will be on regularly as you’ll be relying on them heavily initially.

Now moving on from the farming route we have a few other options. The next one we’re going to discuss is the hard to get stuff. By that i mean military and elite crates, air drops, helis and bradley.

The military crates are usually found around the bigger monuments such as launch site or dome. However they still do occasionally spawn around the smaller monuments too. These crates are fantastic because they’re not too hard to get in comparison to the other options and they can have a python, custom smg, thompson, pump shotty and while it is only a very small chance you can even get an ak.

The elite crates are an entirely different story. Currently only obtainable from launch site or Military Tunnels and usually via some crazy and dangerous parkour $#@!. These crates are what you are after when you’re hunting down all the top tier stuff.

They have all the top tier components, they have the ak, the bolty and the rocket launcher. Hazmat suits, supply signals and armoured doors.

In other words if you get one of these crates. Be ready to run straight back to base.

Next on the list are the air drops which are jam packed with loot however they contain items from low tier all the way up to the top tier therefore sometimes you get really #@$! Airdrops.

They also have a small chance of having an lr-300 ar or an m92 pistol, which for those of you that don’t know are uncraftable guns and some of the best in the game.

The main issue with getting these is when they spawn in, a plane flies over making heaps of noise and then the drop starts parachuting down.

It can happen anywhere on the map, usually about once an hour provided there’s enough players on the server.

You can also find a supply signal in boxes. If you do, throw it down, purple smoke will pour out of it and your very own airdrop will be on its way. Keep in mind that people will hear and see the plane flying over and potentially come and try to steal it.

These events generally cause a lot of attention so if you’re going for one of them make sure you’re ready for a fight. Or you could get incredibly lucky like galthad once did when he went after one completely naked with a guitar in hand and the power of song to protect him.

Honestly i was waiting for him to respawn in base until he walked through the door with not one but two air drops. It really can go either way so just be on guard in-case others are there or are on their way.

Next up we’re going to take a look at the loot boxes that fight back. Let’s start with bradley which is a super pissed off tank that roams around launch site.

There are a number of different ways to kill it but my personal favourite involves 2 c4 and hiding around a corner. Once you kill it you’ll have to wait for the fires to go out on the loot before you can get at it.

This normally takes about 5 minutes and don’t try to loot it while it’s still on fire or you will die. Instead, defend the area and make sure nobody jumps you while you’re waiting for the fires to go out.

You can get an assortment of mid to high tier weapons, high tier equipment and raiding equipment from the loot boxes plus you can mine the wreckage for charcoal, metal frags and hq metal.

Then there’s the heli, far more of a threat and you’re going to need a heli tower to efficiently take it down. Though i have seen it done with as little as 3 high external stone walls.

The heli does the same thing as the bradley so when it dies be prepared to guard some fiery boxes. Because this encounter is harder than a bradley fight you get more crates as a reward. Not only that but the loot table is stacked with high tier weapons, equipment, components and items. Oh and if that isn’t enough it’s also the only place to get the uncraftable m249 machine gun.

Now these are reliable methods to get guns however they can take a fair bit of time and effort. If you’re looking for something that could potentially yield results with far less effort then i’ve got two more ways for you to get guns.

The first of which is via good old pvp. Get out there and murder a bunch of people. Try and snowball your way up to top tier gear. Or alternatively you might get lucky and jump a geared guy with a pipey and walk away with a decent little kit.

You’d be surprised at what you can do if you’re sneaky enough. Now this is not advocating door camping. That [email protected]#! Is for noobs. I mean stealthily sneaking up on people and jumping them.

The final method i want to discuss is trading with other players. I’ve left this one until last because honestly it can either go extremely well or extremely poorly depending on the server and players you’re trading with.

If you’ve been on your server for a few wipes and know a reliable and trustworthy trader then awesome, you’re set, trade away whatever you’re willing to part with for whatever you need.

If you don’t have that reliable trader then it’s more risky. Check the vending machines across the map and see if any have reasonable trades for what you want.

Usually the good stuff will be on sale for sulfur. Failing that post in chat asking to buy whatever you’re after, then add whoever you find to steam and organize the trade via there.

You do not want to be talking about a trade in a chat that everyone sees, it’s just asking for trouble.

On one hand this can all work out well and you get your item, happy days. On the other hand it might be a scam and you get jumped, killed and lose whatever you were going to trade.

Use common sense with these trades, if it sounds way too good to be true then it probably is. There are a lot of shop trap base designs out there, take your time and be careful.

That covers just about every way i can think of to get guns. Hopefully you guys enjoyed this and found it helpful. I know a few people had been struggling with getting guns so hopefully this helps you guys at least now you know what you should be doing.

If there’s anything else you’d like me to explain or do a tutorial on leave a comment and let me know!