Cooperative games have always been some of my favorite experiences in gaming, and in this Left 4 Dead 2 review, it’s my hope that I can explain why. There’s something damn near magical about being able to work together closely with friends or family to either solve puzzles, take part in intense firefights, dive deep into dungeons, and so forth. In this case, Left 4 Dead 2 strikes that perfect balance between tense action and comedy in quite possibly one of the most satisfying cooperative games I’ve played to date.

Taking place in Savannah, Georgia, all the way up to New Orleans, Louisiana, players will step into the role of one of four survivors in a desperate escape from the zombie apocalypse. Players can choose between four characters, Nick, Rochelle, Coach, and Ellis. While progressing through the game, these unique characters bring to light their troubled past. They struggle to work together to see the light of tomorrow.

Over several campaigns, the Left 4 Dead 2 story unravels as the survivor traveling across the southern United States. The bulk of the world-building occurs during random dialogue sequences. Each of these can take place inside one of the safehouses. The safehouses act as checkpoints throughout the game or at certain parts throughout each act. 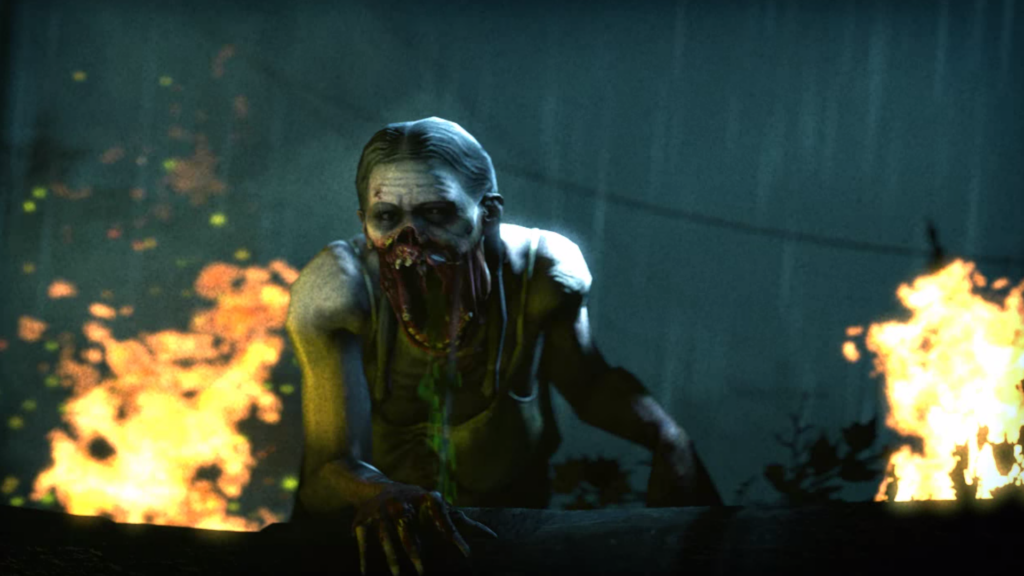 The decrepit environments have their lore built into the world with messages scrawled on walls, which lets players know of others’ struggles. Left 4 Dead 2 has an overall somber tone, juxtaposed by the dialogue, which delightfully breaks the seriousness. My favorite quote comes from the character Coach: “I’m a be a one-man cheeseburger apocalypse!” in the Dark Carnival campaign.

Other enjoyable instances of breaking up the tension are Ellis’s adventures with his presumably deceased friend Keith. These range from innocuous things such as homemade bumper cars to supposedly drowning in the tunnel of love. The plot takes a bit of a backseat, but the characters, with their endless amount of charm and wit, easily steal the show in Left 4 Dead 2.

Using Valve’s signature Source engine, Left 4 Dead 2 still looks incredible in motion. The guns look great, with certain weapons such as the Desert Eagle having a distinct kick to their firing animations. For certain guns, smoke rises from the barrel after shooting the weapon in rapid succession, which further adds to the realism. 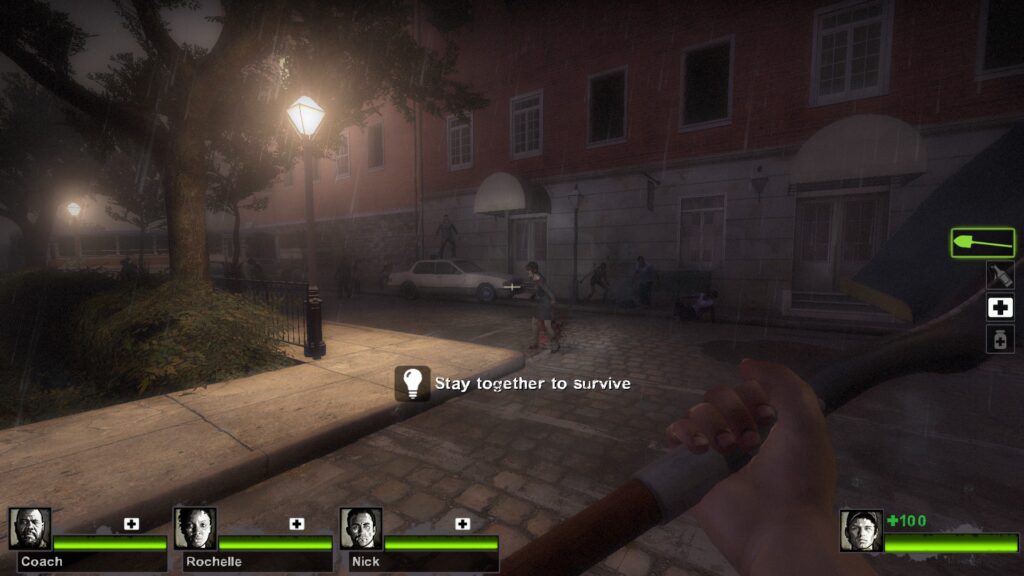 Player silhouettes, handled in such a unique manner, are my favorite graphical touches in Left 4 Dead 2. If a survivor is too far out of a player’s line of sight, their silhouette will change color. The color of player silhouettes will also reflect certain statuses, such as being knocked down or when the player is infected. These color cues can be crucial to a team’s success, given how large each of the maps is, and it conveys information cleanly and efficiently.

Other lovely graphical touches include blood being splattered on the screen when killing a zombie within a very close distance. Boomer bile on a player has a sickly green sludge effect covering up a players’ vision. The game’s heads-up display conveys everything it needs to while also adding its sense of flair with the black and white icons and colored health bar. Bolstered by the accessible interface, Left 4 Dead 2 does a fantastic job of conveying the essential data and actions to players.

Left 4 Dead 2 makes fantastic use of its sound design and is crucial for surviving the sheer amount of zombies. Special infected have their own distinct audio cues.

You’ll have just enough time to bolt into a room to hide from the onslaught as it can come at any time. If that weren’t enough, when the horde finally arrives, it assaults the player with an intense cacophony of zombie grunts, player screams, and instruments blaring wildly to reflect the situation. 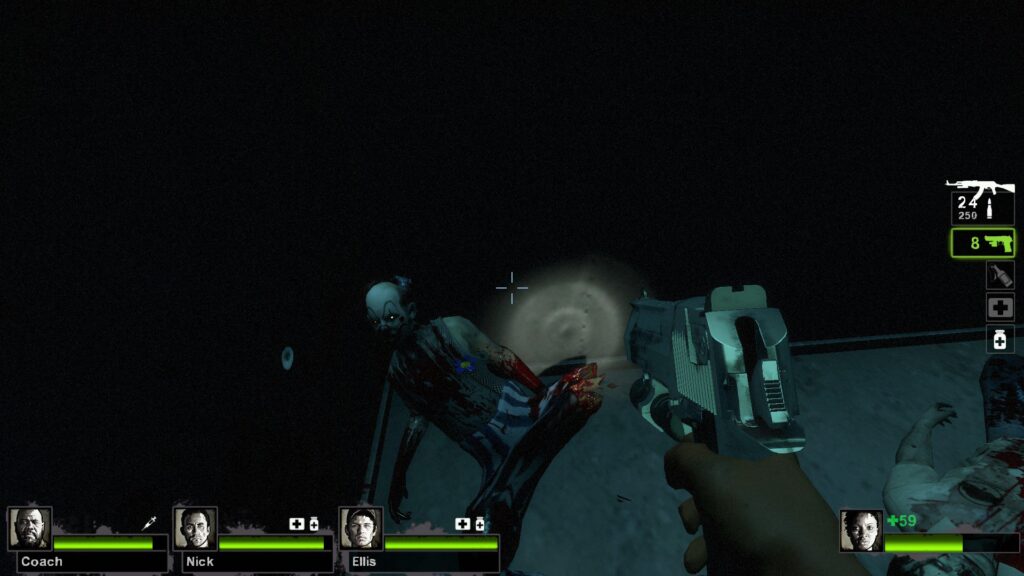 The sound design even extends as far as altering sounds when players get knocked down underwater. It’s these little details that make the game incredibly dynamic. The atmosphere in Left 4 Dead 2 does a great job of matching the current situation while always keeping you on your toes. There are moments where you feel unstoppable when tearing through zombies with a chainsaw. However, at any moment, your ego will be put in check at the sound of a tank. I love it.

Left 4 Dead 2 does what cooperative games do best, and that’s making each interaction with players and the world meaningful. Players are tasked with making their way to the saferoom in several acts and start with varying supplies depending on the stage. Specific scenarios give players either submachine guns or pump-action shotguns to fend off the horde. In contrast, others only give players melee weapons to use.

Proper exploration and resource management must make it through the various events each stage has in store. It can range from picking up beer for a store owner to open a barricade to collecting fuel to gas up a car.

Supplies can give players an extra edge with laser sights upgrading accuracy, while pipe bombs can distract a horde. Arguably the most defining feature about Left 4 Dead 2 is the revamped AI director. The AI director dynamically generates varying amounts of enemies and item spawns for the players. 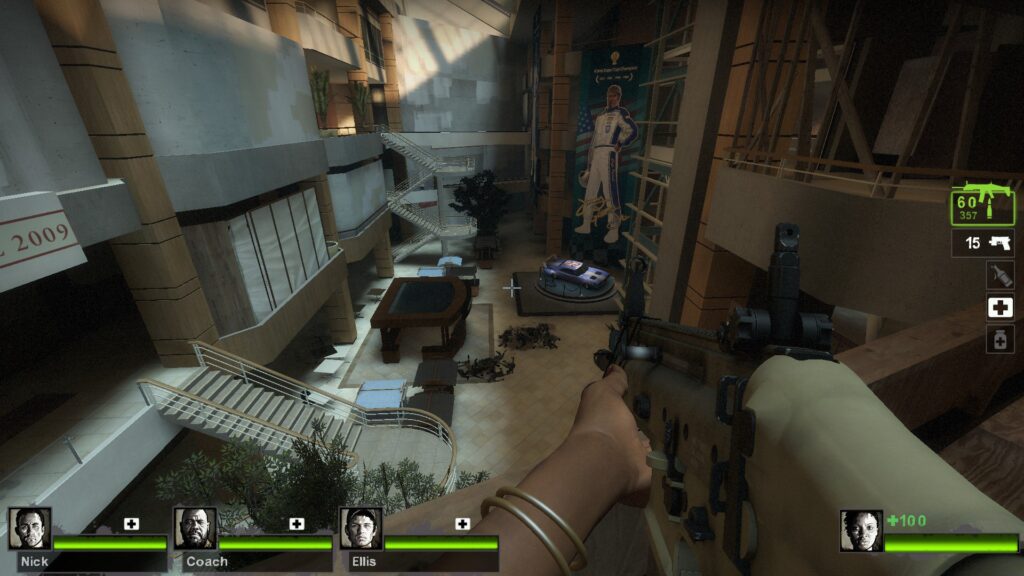 Are you doing too well? The AI director will be sure to throw some special infected your way to section off players. In a bind and just short of being fully healed? Sometimes the AI director will show mercy and offer a cabinet full of pain pills for players brave enough to explore. The sheer amount of randomness that the AI director can throw at the players alone can break even the best of players.

Left 4 Dead 2 has a staggering amount of content with its total of 13 campaigns, which includes the original game’s campaigns as well. There are many achievements, and dedicated players can challenge themselves with difficulty modes and accomplishments.

In Expert mode, monsters do a ton of damage, and resources are even more scarce. Realism mode changes up the format even more by removing the silhouette feature from before and removing the hero closets, which generally bring lost players back to life.

If you’re itching for some competitive action, Left 4 Dead 2 has a versus mode where survivors compete against player-controlled special infected zombies to see who can get the furthest. If somehow that STILL isn’t enough content, Left 4 Dead 2 offers more mods and community-made maps that will have you playing until an actual zombie apocalypse happens!

It’s hard to believe that Left 4 Dead 2 was released in 2009. It’s a testament to how robust the overall game design is that many players, myself included, are still playing it to this day. The dynamic AI director, built both for horror and comedy, works hard to fight off the players. Left 4 Dead 2, to this day, is one of the most engaging cooperative games I’ve ever had the pleasure of playing.

If you were a fan of this franchise, you’ll be interested in checking out our review on its spiritual successor: Back 4 Blood.