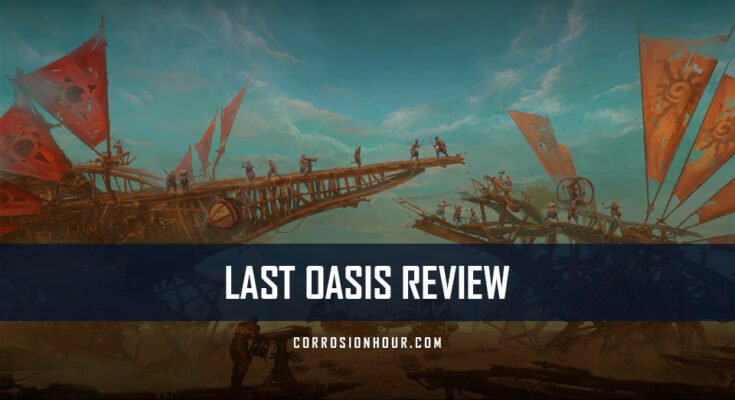 Stride Across The Dunes Upon Improbable Wooden Machines In Last Oasis

Set in a dying world of scarce resources, players must work together or go to war while being chased by impending and eternal dawn.

Beset by teething problems with server stability on release, Donkey Crew proved to be a stand-up development team, offering no questions asked refunds until the game was working.

Barely a week later and the game stabilized, showing off this development team’s hard work with a fantastic survival crafter with unique gameplay elements and a visual style all of its own.

We race across the broken Earth in our walkers. When time permits, we look upon the shattered moon in the daylit sky and wonder what led us here. Endless daylight shines down upon us, save for the briefest moments when lunar fragments cross the sun’s path.

As the sunlight bursts through the pieces of Luna, the desert is steeped in an eerie glow. As few as there are, the plants and trees shine back with spontaneous luminescence—an echo of the moon’s haunting light.

The only thing we know is that the Earth has stopped turning. Well, it still turns, only painfully slow. Fate consigns the human race to live on the cusp of an endless afternoon. The planet cooks one side and freezes on the other. The only way to survive is to be continually moving within this Goldilocks zone.

We are all nomads, forced to abandon the sedentary life of cities and towns. Traversing the desert never indeed permitted rest. The world turns and exposes a new oasis, while the ones that kept us safe have now turned to face the sun.

We know that much has is lost and that there isn’t time to mourn its passing. Ingenuity and primal engineering are all that is left of the human endeavor as we race for the Last Oasis.

The Last Oasis is not overly demanding visually. The game does well with simple models and straightforward geometry without depending on massive poly counts or extensive use of shaders.

This simplicity meets with the fascinating complexity of the walking machines. Their hundreds of moving parts interact flawlessly with the terrain and change their speed, height, and movement weight dynamically. This attention to detail brings the walkers to life and helps raise the suspension of disbelief that such incredulous machines could ever exist.

Enemy models do their job in advertising what a creature is and how dangerous it is. But could receive a little love and attention, particularly the Rupu. Who, for the time being, looks like people wearing knockoff Planet of the Ape’s costumes.

A genuinely compelling style of geometry and lighting creates a profound sense of dryness. The desert, while positively not endless in terms of ‘play area,’ gives a great impression of distance. The blue sky and red sand contrast well, letting us see from one edge of the horizon to another. 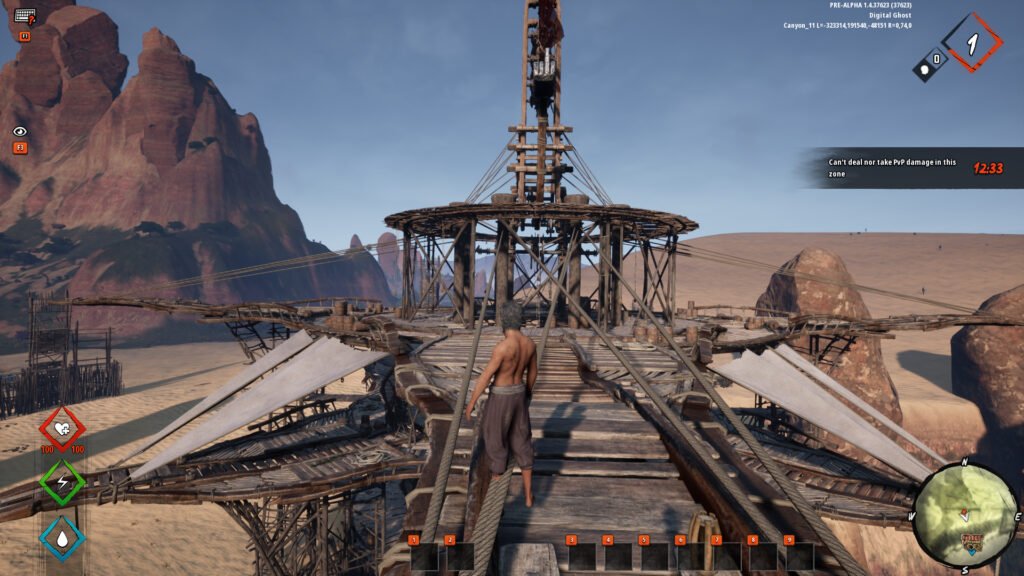 There are scattered oases within each piece of the desert in deep canyons, lush and verdant when compared to the desert above. These places effectively feel like moments of reprieve between ventures out into the burning sun. Strangely, you begin to look forward to opportunities to dip into them. Whether it’s to harvest cat-tail reeds for rope or wood for a new walker, they are a welcome and necessary break from the never-ending sand and stone.

Unlike traditional survival games, where we would typically bunker down and hoard resources, we cannot depend on one zone being safe for too long. Whether the threat comes from the sun or marauding groups of players, the capacity to travel quickly is essential.

Light bases made of wood and rope can be deconstructed and stored in the belly of more massive walkers. In contrast, you must leave behind more resilient bases made of stones and clay as the sun begins to rise.

There are more than a few types of walkers available from early on in the game to facilitate several different playstyles. You’ll begin with a small solo craft and quickly progress to a larger Dinghy.

Beyond that, you have the choice of moving into large but slow haulers or faster and more agile fighting ships. If you’re keen to go back to solo play, there are advanced solo walkers, and beyond that, there are the clan vessels that serve to both move massive amounts of resources or serve as a base of operations when a clan decides to claim a zone as their own. 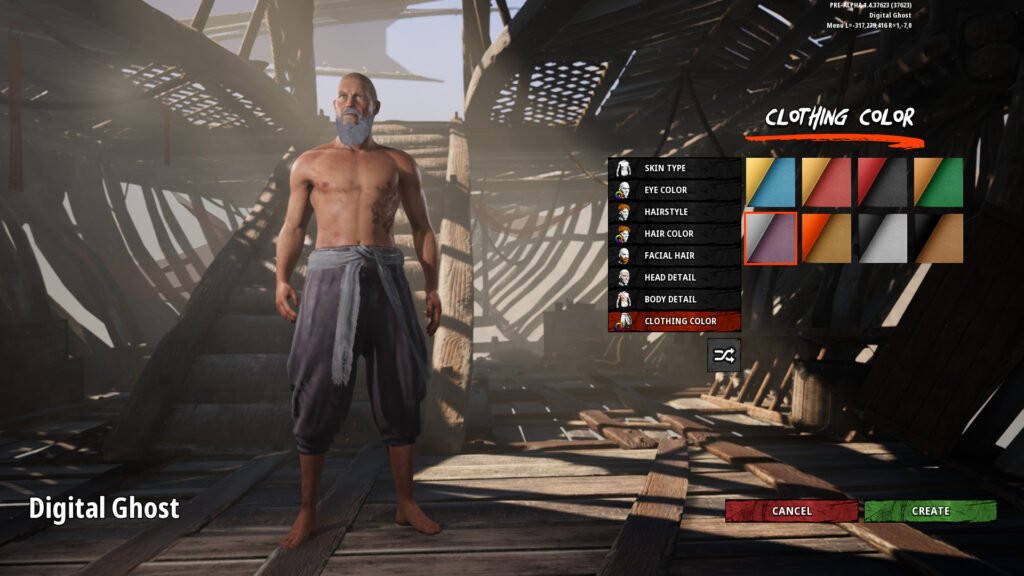 In a somewhat unique fashion, the game limits the number of resources farmed by players: wood, stone, bone, and a few others. Higher tier materials are, for the most part, player-made and are made by either feeding amounts of primary resources into a crafting bench or by combining different resources to make new ones.

Skill trees need an accumulation of ‘fragments’ to be unlocked. And much like the resource farm, lower-tier fragments must be combined to make advanced fragments.

The talent trees themselves are vast, with a variety of skills to choose from. While the trees’ path may appear at first to be about specialization, each player must learn almost all the talents available for themselves. We simply get to choose the order they’re unlocked.

Teaming up with a group or clan doesn’t fix this issue either. The workbenches which create advanced materials are unusable by players who haven’t learned how to make the same workbench for themselves. 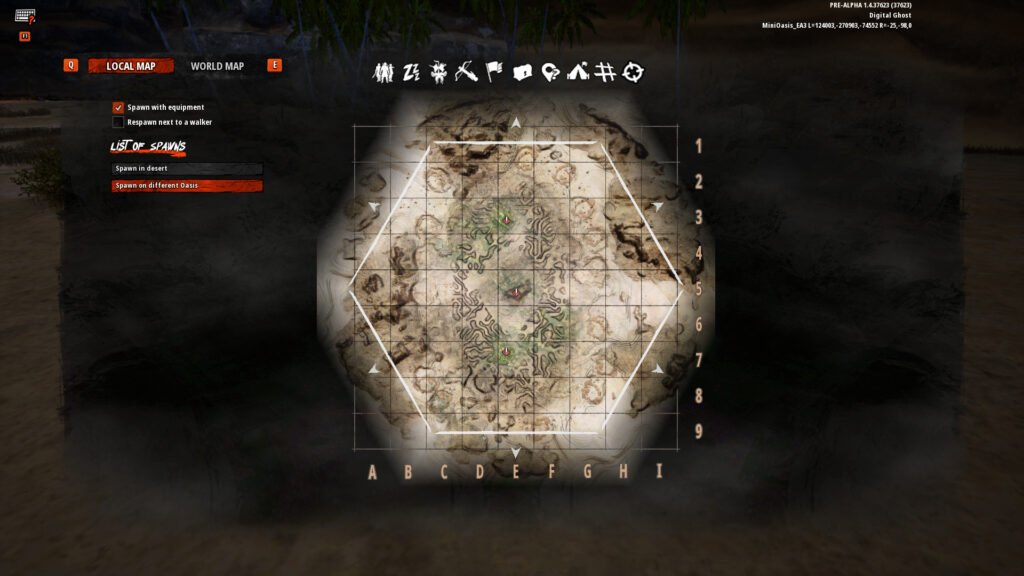 This problem is not insurmountable as players progress; the gathering rates of skill fragments increases. Leaving only this issue of choosing the incorrect skills early on. You’ll be a fragment farming machine if you choose the right skills. But you are disabled until you don’t.

The combat is fun and responsive, with directional controls for weapon swinging and blocking, dueling other players one on one, while fun, doesn’t yield much other than bragging rights.

Typically numbers win out in fights. If you’re alone, an enemy vessel carrying three people will get to split their efforts into knocking your walker out of action while the players fight you on the deck.

This logic extends to clans and more extensive scale combat. Massive groups have already begun forming and taking territory. How long they last with their nomadic empires, only time will tell.

The leveling up process is compelling but not something we feel ready to do again just yet. That said, there’s always more to learn about our character. New Oasis will be opening up as others fall behind, and we’ll have to set up again in new parts of the world while the clans clamor for dominance.

There is a small void in the content that will fill out as the months go on. For the time being, it is still in very early access, and it will be interesting to see how the central population fragments as private servers become available.

Last Oasis is an inventive and enjoyable title that will be loved by fans of survival crafting games. If you and your friends are looking for something new with a bit of a different flavor, The Last Oasis comes highly recommended. The game design builds on the classic survival crafter package of gather – craft – build – level up.

With some definitively unique additions such as the walkers and the rolling zone creation, Last Oasis will genuinely grow into a beast all of its own.

Gal is a writer and editor of Corrosion Hour; A RUST community Website dedicated to helping server owners with administration and navigation and creating useful how-to guides and information for new and veteran players. Gal is a survival crafter veteran with qualifications in video game development and design and spends much of his time finding ways to bring new people into the world of survival crafters.