How to Install uMod (Oxide) to a RUST server

This guide is designed for installing uMod (previously known as Oxide) and will walk through how to manually install uMod to a RUST server.  The uMod framework is a popular modding platform that allows RUST server owners to install and manage custom RUST server plugins.

By the end of this guide, it will have covered the basic information needed for installing uMod to a self-hosted Windows-based RUST server. If attempting to install uMod with a 3rd party game server host, the install process may differ.

There are many reasons to set up a modded RUST server, as server owners wish to offer unique and customized experiences to their RUST players. Server plugins, or otherwise known as mods (short for modifications), are small portions of code that enable extra functionality that doesn’t exist in the vanilla game. RUST server plugins can be used to add additional tools for server owners or to enhance endless aspects of the game for their players.

Installing uMod to a RUST server will open many possibilities

UMod’s website makes the latest version available here: https://umod.org/games/rust.  Notice the description where it declares which RUST update the mod is patched for — avoid versions of uMod that do not match the protocol version and build date of the RUST server. If uMod’s version exceeds the RUST server’s protocol version, it must be updated to the latest version. Otherwise, mismatched versions will cause unexpected errors to occur. Download the latest version of uMod to match the server’s latest patch.

Copy the uMod files from the download to the RUST server’s root directory.

Step 3: Verify that uMod is running on the RUST server

When the uMod files have finished copying to the server,  it’s time to verify that uMod has been installed successfully. First, though, start up the RUST server and allow it to fully complete the startup process. Then check the Oxide version by running the following command:

You should see output that looks something like the following: 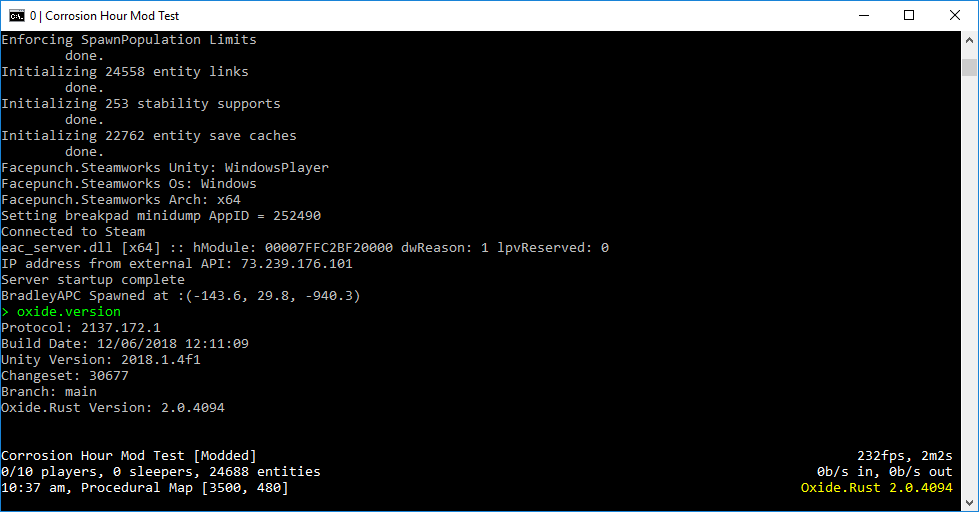 Here’s an example of what the RUST server output may look like in Window’s CMD shell.

Once uMod is successfully installed.

When the RUST server responds with the correct Oxide version, it will have been successfully set up and is now ready for you to install uMod plugins. Be sure to browse uMod’s website, as it offers an extensive list of free RUST plugins and has an emerging marketplace for premium paid-for plugins.