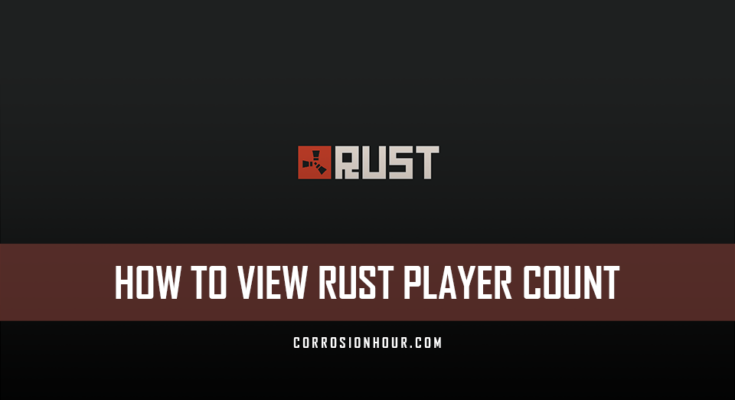 Just How Many Nakeds Are There?

RUST is a popular game, and many servers reach their maximum capacity during a wipe cycle. It’s essential to have a good idea of your server’s current player count, as it can substantially affect how you go about playing a wipe.

If you log on to a half-populated server, you take your time and be a bit pickier where you choose to set up your starter base. On a server approaching its population cap, you might be more inclined to focus on where you want to settle down and hit the ground running. 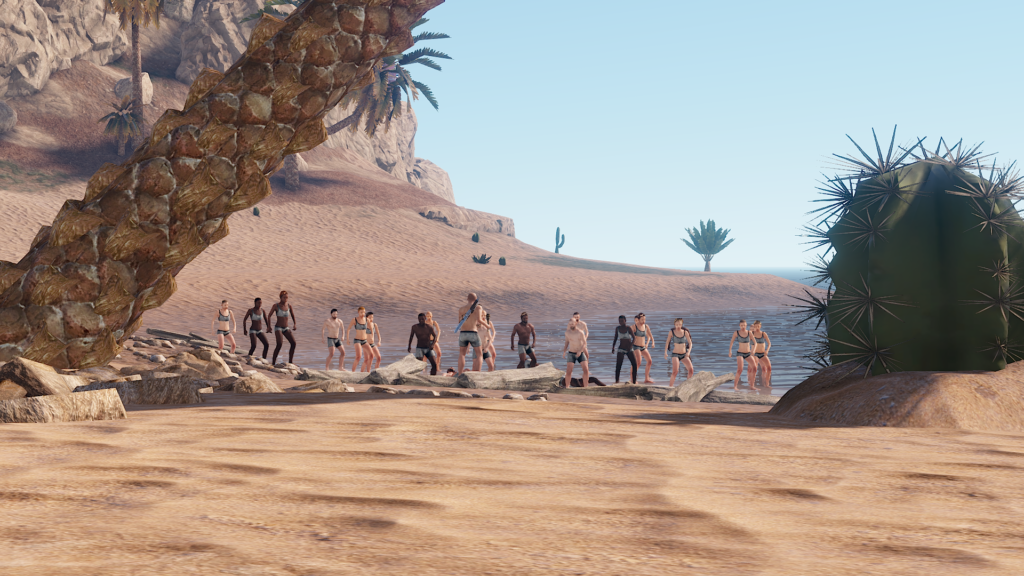 How many players are online can fluctuate wildly at any given time, but some patterns will provide you with a good idea of roughly what’s going on population-wise. But if you’re after certainty, there are some things you can do to find out precisely who’s around.

There are several RUST player counts to be aware of:

Knowing how many people are playing on your current server of choice can impact your playstyle, depending on the max and average population.

Understanding the overall player count will give you an idea of whether you should expect queues when you try to log onto your server of choice.

And lastly, understanding RUST’s all-time peaks and highs will give you an idea of when RUST will undergo bursts of popularity and new player influx, information that’s handy for both players, server owners, and people entertaining the idea of hosting a RUST server.

Before you log onto a server, the server list, and splash page, shows the number of players and the maximum permitted. Be aware that even if there are spaces left for players to join on some servers, you may end up in a queue. These queues can happen as some server owners actively lockdown several free slots for paying server members.

If you’re already online and logged onto your server, you have the benefit of the Steam Overlay to tell you not only how many are on but precisely who is on. Make sure you enable your steam overlay in Steam / Interface settings. 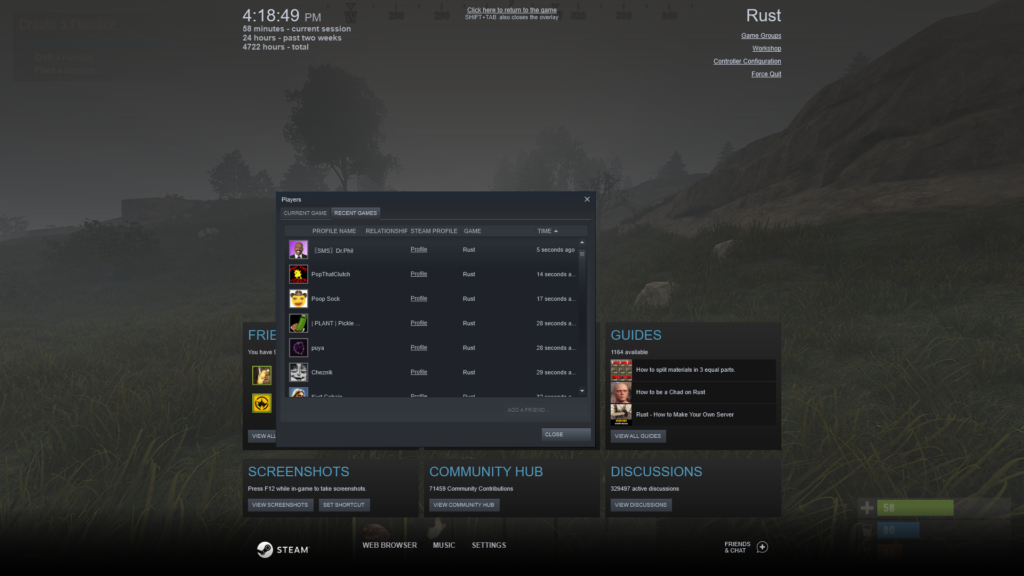 Once in-game, press your steam overlay shortcut, which by default, is shift+tab. In the Friends window on the screen’s left side, look for a button labeled ‘VIEW PLAYERS.’ Pressing the button will open a list of active and online players.

If this feature isn’t working or is disabled, the only other way to find the population data is to check either Battlemetrics for the server listing or a third party tracking website that the server owner likely hosts on their website. 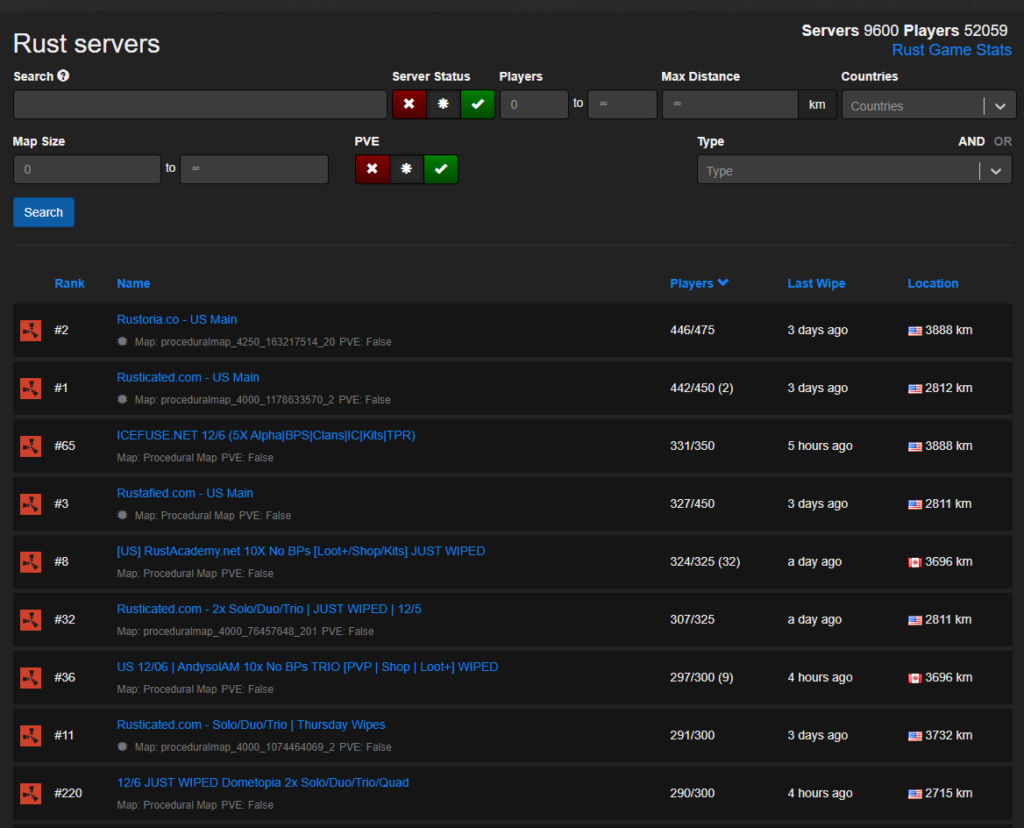 If you’re considering jumping on for a wipe and you’re curious about the game’s overall health, a handy number to look up is the current overall player count. You can access this information easily through the SteamCharts site.

Access the Steamcharts.com RUST page or open the Steamcharts site and search for RUST manually. The Steamchart’s info will tell you how many are currently online and give a breakdown of RUSTS overall population across the days, weeks, and months and years if desired.

If you’re keen to know the history of RUST’s popularity, or you’re potentially interested in hosting a server yourself, it’s handy to dive a little deeper into the information available on the Steam charts.

RUST’s all-time peak was 125,415 players in April of 2020. Some games have far outperformed RUST in this regard, but as a title, it has sat comfortably in the top 10-20 games of concurrent players on Steam for many years.

Looking over the last several years, you can see definitive growth in the Rust player population with small peaks and troughs, broadly aligning with the release of new content and feature patches.

The benefits of knowing the RUST player count

So now you know how to access the RUST player count in terms of specific servers and overall. You can use this information to inform your playstyle, choose a server, or even time your server’s opening to match peak playtimes.

What you do with this information is up to you.