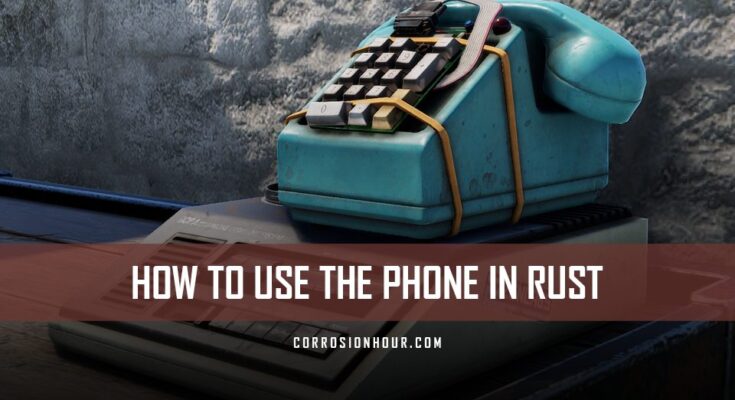 For a good time, give your enemies a dial, or two.

If you’ve been playing RUST and you didn’t feel like it fulfilled your social needs, then you’re in luck. Facepunch has given each of us a phone, so we can ring our allies, berate our enemies, and call into a select choice of monuments.

Who is that distant figure looting the trainyard? Worry no more as all the monuments have handy public telephones installed and listed in the directory. You might be wondering, how do I get my hands on one of those precious turquoise ringers.

This guide will walk you through how to:

How to acquire a phone in RUST

Getting your hands on a phone in RUST is the easy part. They can be found at low rates in sunken chests and crates, and even less often on oil-rig scientists. However, the easiest way to get one is to purchase it from the outpost vending machines for 50 scrap. 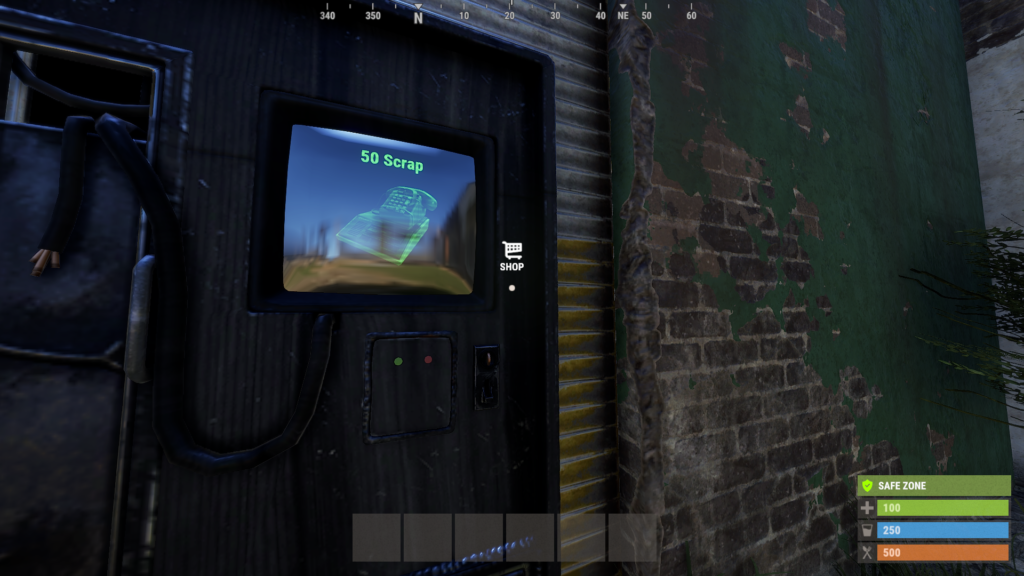 You can use a research table to learn how to make the phone for 75 scrap, but there isn’t much point to doing this, as to craft a new phone is going to cost you tech trash. And for another 50 scrap, you could have just purchased a second phone instead.

It’s important to know that there is no way to link the phones in your base. Each phone will have a unique phone number associated with it. So, if you purchase more than one phone, you’re going to be juggling multiple phone numbers.

Setting up a phone in RUST

Once you bring your shiny new phone home, it’s time to set it up. Pick somewhere practical but also out of the way of foot traffic. If you answer the phone, you lose the ability to walk around and get in the way of teammates, so make sure to have a dedicated phone nook.

The phone number is determined when you place the phone down. If you pick it back up with a hammer and place it down again, your number will change. The numbers are randomly determined, with no apparent relation to in-game location. 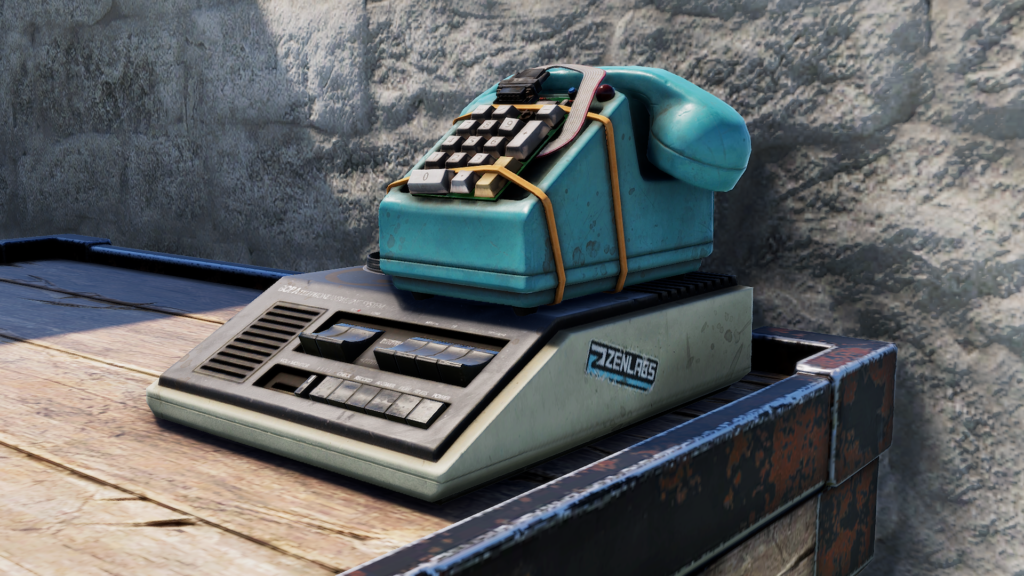 Players can place phones in RUST on the ground, foundations and floors, staircases, small and large boxes, and different tiered workbenches.

Connecting the phone to a power source

Once placed, you will need to power the phone. Note that an unpowered phone can ring, albeit muffled and unanswerable. Fortunately, a phone takes barely any power. Just one consistent volt will do the trick.

Look at the side of the phone with the wire tool selected on your hot-bar. You’ll see two jacks on the right side of the phone. One labeled ‘Power,’ the other called ‘Call Passthrough.’ You’ll want to run your power source into the ‘power’ socket. Remember that the phone only needs one power to operate.

However, it will continuously consume that one power, even if it’s not in the process of taking a call. So you may want to unplug the power to your phone if you’re still operating with small batteries for your power source.

The ‘Call Passthrough’ socket will output one power while the phone is ringing. You can feed this socket into another component to set up a light or an RF transmitter that will let you know that your phone is ringing.

If paired with a pager, the RF transmitter will buzz at you, anywhere on the map, if you miss a call. Is it just me, or does it feel like the ’90s in here?

If you wanted, you could even pair the ‘Call Passthrough’ with a smart component and the RUST+ app, so you receive notifications on your real-world phone when somebody tries to call… ominous.

If your phone is put down and powered correctly, you’ll have access to the directory, dial-pad, and a personal contacts list. The directory is automatically populated with your server’s monument phone numbers. 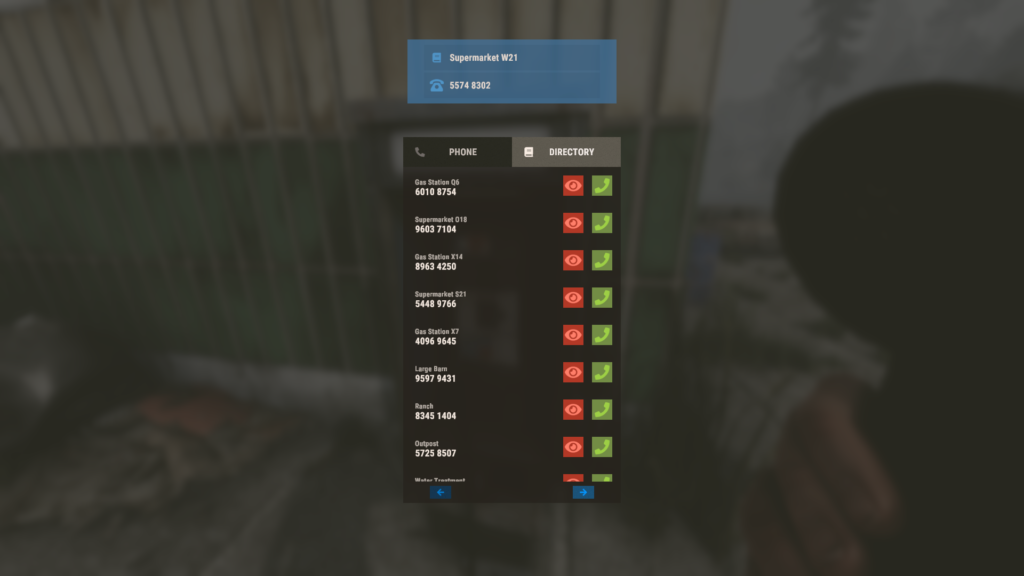 The only other way to get numbers is to ask politely in the server’s chat. Without a doubt, players will find entertaining reasons to advertise their number. But for the time being, there is no organic way to get another player’s number without simply asking.

However, once they give up the digits, you can enter them into the personal contact list. In the contacts tab, go down to the two blue boxes, enter the number and a suitable contact name, and you’ll have your new friend on speed dial.

Note that your phone will keep its contacts even if you depower it, but picking it up will reset your contact list. So maybe write some of those important numbers down on a note somewhere.

A new way to get salty

So get out there and get ringing. Maybe leave your number on a note for the unfortunate souls you just raided. Or set up a hotline and advertise on a billboard. The options are endless. Just make sure to be respectful and polite, like you needed reminding.

If you find a useful purpose for dialing into monument phones, jump into our Discord and let us know! We’re still scratching our heads on this one.