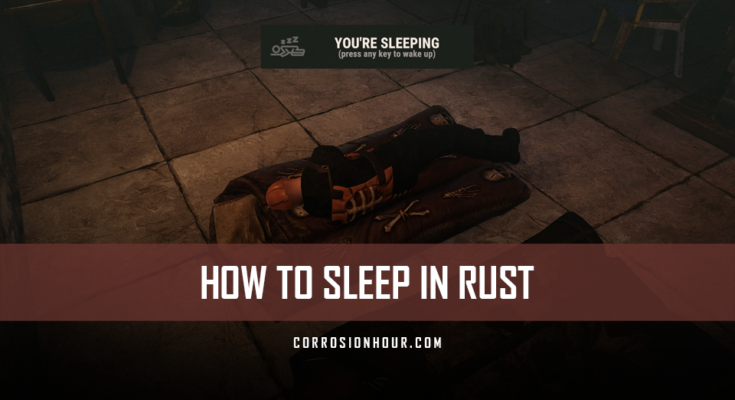 We are Such Stuff, as Dreams are Made on, and Our Little Life is Rounded with a Sleep in RUST

If you’ve spent any time on the island, you’ve undoubtedly come across people having a little sleep in RUST. Whether it is the impoverished naked having a nap on the beach or that slumbering teammate in the base who hasn’t logged on in days, as a wipe progresses, these sleepers will litter the map, dreaming their RUSTy dreams.

One primary benefit of sleeping in RUST is that it preserves your character’s consumption of food and water resources. While in the sleeping state, your player’s hunger and thirst won’t increase, as if you’re in stasis. It might not sound like a big deal but it can substantially affect your resource management if you live in a demanding environment, such as the frozen or desert biomes, where food consumption rates are higher.

You’ll notice that the player in your team who goes AFK by standing in a corner is most often the player munching their way through your fish and bear meat reserves. So be a team player and learn how to sleep in RUST if your presence isn’t necessary.

Effects and dangers of sleep in RUST to be aware of:

Yes, as useful as it is to not consuming food and water, to be asleep in RUST is to be completely vulnerable. Other players can access your inventory and take anything from your pack or hot bar. Accessing your inventory isn’t limited to enemy players. You’ll often find upon awakening in the base that some friendly teammate has ‘borrowed’ your crossbow or used your inventory as storage for the base, loading you up with important materials and preventing you from quickly running off to get the latest airdrop.

Meanwhile, sleeping in the wilderness makes your inventory free game for any passing player or beast. If a bear kills you, they will eat you and leave your entire inventory for other lucky hunters to find. So only aim to sleep indoors or only sleep outside when you have nothing to lose. Even if you have nothing to lose, you will likely be killed and harvested by a passing player. If not for your resources of bone fragments, fat, and meat, then for the sheer morbid joy of braining a sleeping player with a rock. So at least make sure you’ve set a sleeping bag down to at least keep your location.

There are 3 ways to sleep in RUST

Every time a player starts a new RUST session and logs into their choice server, they will automatically see the sleeping screen, which will be interrupted upon pressing any keyboard or mouse button. This sleep status screen is fairly straight forward, as your character is lying down in one of two places:

You’ll notice that there are no controls or UI elements available when in this status. 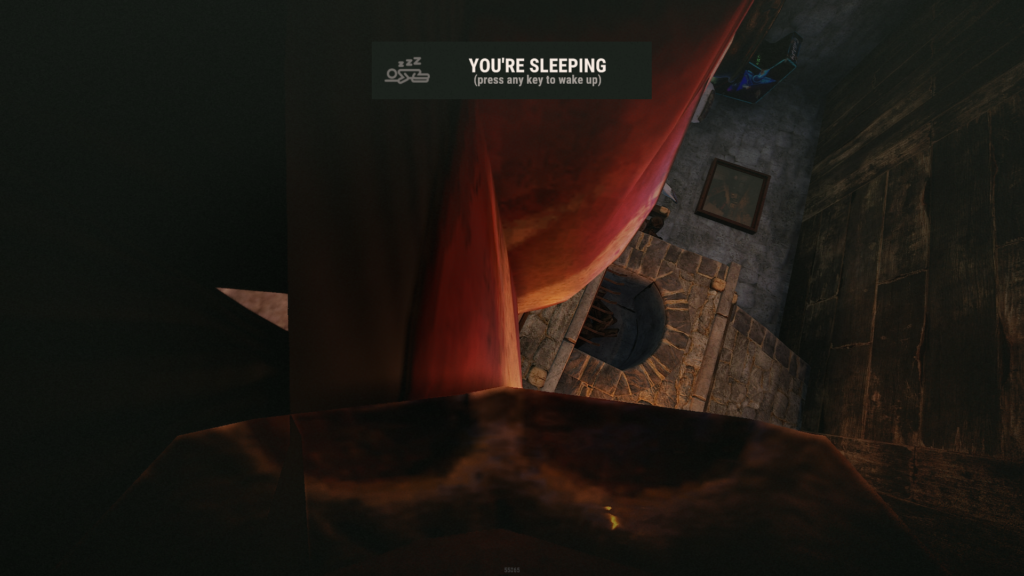 If you do not interrupt the sleeping status by pressing a button, your character will continue to remain laying down. This can be useful, as while your character stays in this state you are not consuming resources, but will show up online. You may take advantage of this to deter enemy players from raiding you while you’re offline. When you get creative, sleeping in RUST can be used to your advantage, but keep in mind, you cannot interact with the game while in this mode.

When you log out of a RUST server or quit the game while logged in, your character will automatically go to sleep. This action occurs whether you choose to sleep or not and is how the game manages players logged in and out. Your location will be specific to the server in which you logged out, so if you connect to a different server, it will be a completely different location.

If you must log off for an emergency while you’re out in the wilderness, try and find some dense shrub or cluster of rocky cliffs in which you can hide, or both as seen in the example below. These are areas players will usually avoid or are less likely to traverse, as traps are often placed in bushes and rock cliffs put you into a vulnerable state if caught off guard by enemy players. 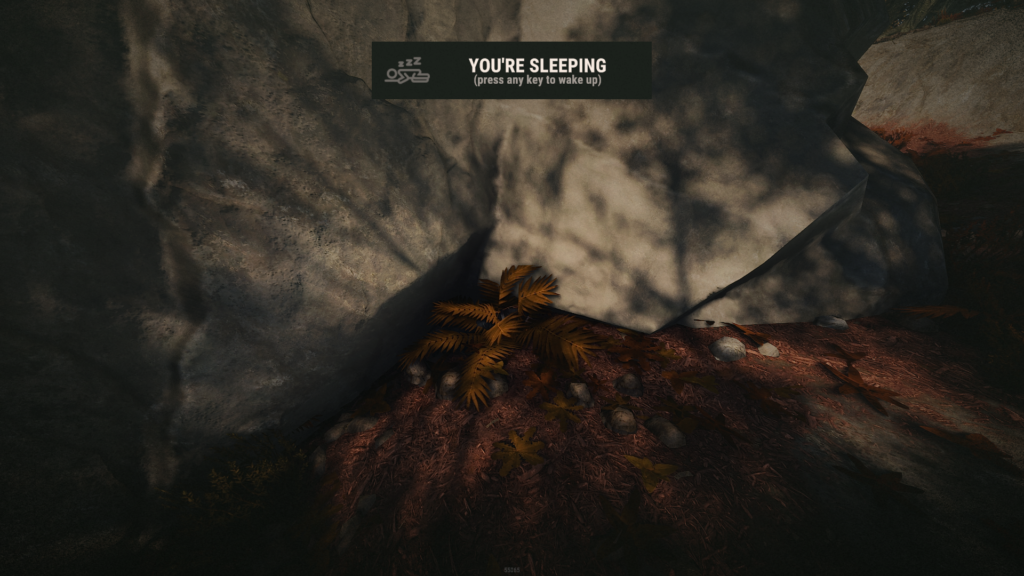 It’s very difficult to spot the sleeping player’s body because it can only be seen from a few angles. The rock wall reduces the chances of being seen considerably, while the dense foliage and shade also contribute to hiding the player.

It’s important to note that if you are disconnected from a server or the server shuts down for any reason, you’ll also go to sleep where you stood, or worse if the server rolls back to the last save, you may be completely vulnerable.

When you die in RUST, you have the option to respawn randomly on one of the spawning beaches. Alternatively. If you have a sleeping bag or bed set up somewhere on the map, you can choose one of those to respawn at. Regardless of which you choose, on coming back to life, you will end up automatically asleep until you press a button to awake.

If for any reason, you need to reset back to your bed and you don’t have any nearby threats, you can press the F1 key to bring up the console and type kill, then press the enter key. The kill command will automatically end your character’s life, regardless of your hunger, thirst, or health. 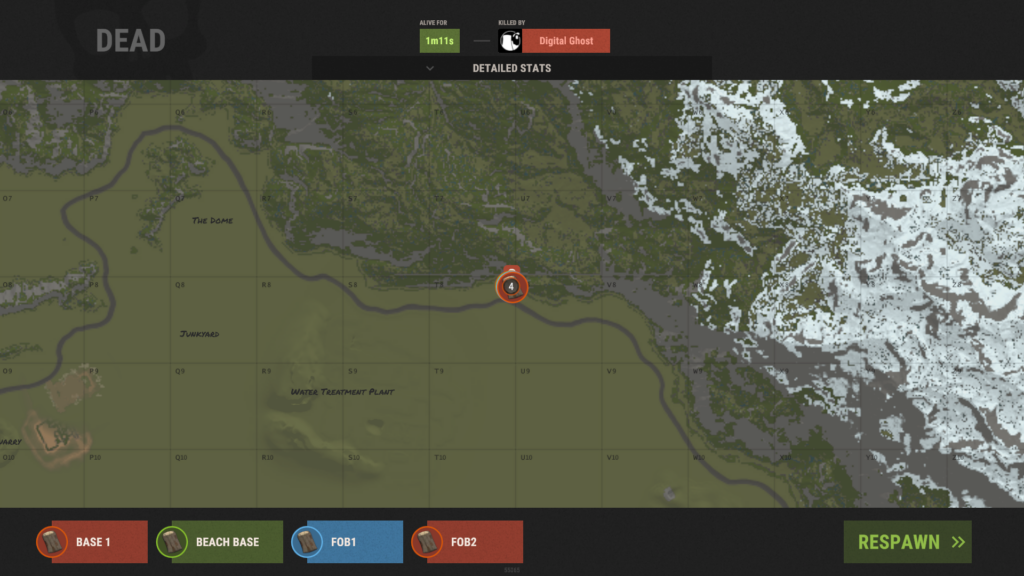 Make sure that you’ve tucked your belongings in a box or somewhere safe, as your body will eventually decay and then despawn into a bag holding your belongings, which will then disappear itself in a few minutes, depending on the value of whatever is inside it.

After doing this, your character will be asleep in whatever bed, bag, or beach you’ve chosen as a respawn option.

Now you know the benefits and dangers of sleeping in RUST

Like everything in RUST, sleeping is a gamble. You’ll be relatively safe in the base so long as raiders haven’t made their way through your walls. Sleeping outdoors is highly dangerous and is the fastest track to being picked apart by a naked or roaming wildlife. So long as you safely tuck your precious gear away, there are no real concerns regarding sleeping in the wild, and in some instances can help you keep the anonymity of who owns your base or who your allies are.