Monitoring your FPS can help give you an edge

In case you’re unfamiliar with the concept, your FPS in any video game is the rate at which your PC or console draws frames per second. The higher the FPS, the smoother the activity on your display, whether it’s a monitor, television, projector, tablet, phone, etc. It’s important to be able to show FPS in RUST while you’re playing.

A lower framerate can hurt your gameplay in certain situations, as you cannot react to things you cannot see. While your computer is already dealing with a connection to a server, which is then connecting to other players, lag (latency) combined with a low frame rate, can cause information loss.

So it’s essential to keep your framerate relatively high, matching your PC’s maximum refresh rate being ideal. If you have a 60 Hz monitor, there’s not much point going past 60 FPS, as your monitor cannot refresh the image fast enough to keep up. But newer monitors can produce higher frame rates, so it’s a good idea to know where your rig stands FPS wise. With this information in hand, you can take steps to improve your FPS and understand where your setup might be falling short.

Luckily for all RUST players, there is a built-in on-screen performance indicator that players can enable or disable quickly and easily. 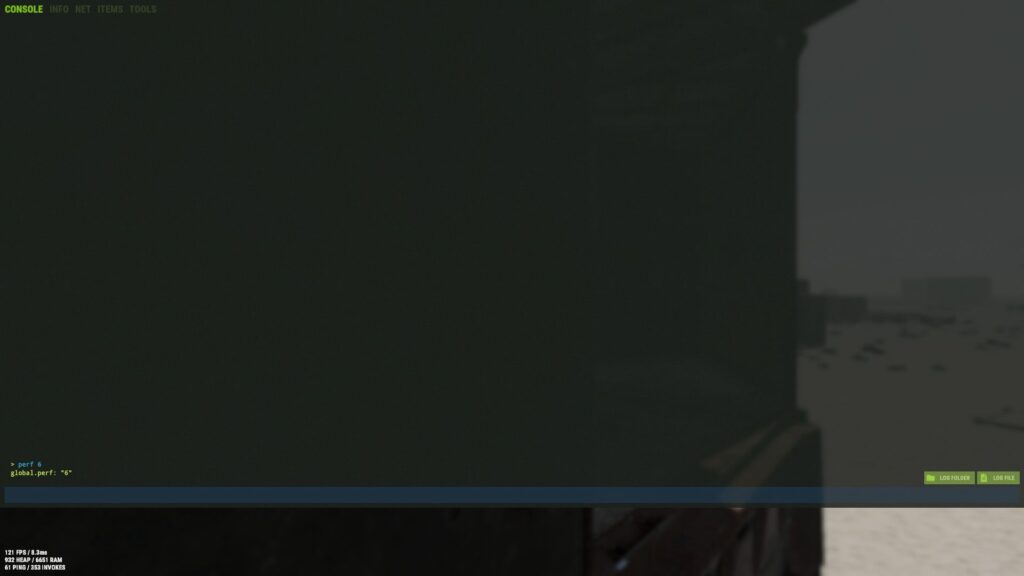 Once you’ve loaded into RUST, press the F1 key to open the console, then type the command perf 1 and press the enter key. Your framerate should appear at the bottom left corner of your screen. When no longer need the FPS counter, re-open the console and type perf 0 to make the indicator disappear.

The FPS number will fluctuate as your PC’s capacity to render frames can depend on movement, how busy your screen is, background processes, and many other factors.

There are multiple parameters the perf command accepts, allowing you to display additional information:

The Steam Overlay is enabled by default, but if it is no longer active or has stopped working, these are the following steps to get your Steam Overlay and FPS counter working again.

Open Steam, and click the Settings option, found in both the Steam and View drop-down menus, at the Steam browser’s top left.

In the Settings menu, find the in-game tab on the left side of the window. Once there, the first option available is a tick box for enabling the Steam Overlay while in-game. Make sure to enable this option. Below the three tick-boxes is the shortcut key to open your steam overlay in the game. You can leave it as the default or set it to whatever you prefer. If you want to avoid spreading the overlay accidentally while playing, we recommend having the shortcut set to a two-button press—Shift+ Tab, for example.

Below the Steam Overlay shortcut selection is the in-game FPS counter. The setting is off by default, but you can press the drop-down to choose which corner of your screen the Steam Overlay will display your FPS.

If you want, you can enable the high contrast color, making it easier to see the FPS on a busy screen.

If you want to make sure you’re getting a good reading on your FPS, most hardware manufacturers release some kind of FPS counter along with their proprietary software, such as MSI Afterburner and GeForce Experience, for example.

It’s likely you’ve already installed your video card’s management software, but just in case, run a search for your video card and poke around. You’ll quickly find the applicable software. If you prefer a non-video card-specific solution, there are other providers of FPS counters such as FRAPS or FPS monitor.

However, make sure you download it from a reliable site. Ask around before committing to any extra software, and remember that the more background programs you have running can diminish your FPS, so maybe stick to the ones you already have.

Now you know how to show FPS in RUST

So what’s next? You can see your FPS, and if it’s matching, or at least close to your refresh rate, then great. However, if your frame rate is dropping considerably lower than at least 60 FPS, then it might be time to consider some changes that could help improve your overall RUST gaming experience.

Be sure to check out our advanced RUST FPS guide written for 2020 for tips and tricks for bringing your FPS in line with the base recommended standard. It contains a wealth of information about what each graphic setting does and the severity of that setting’s impact on RUST’s FPS.

Some people like to leave their FPS counter running permanently, but others find it distracting. Whatever you prefer, knowing how to show your FPS in RUST is an invaluable tool that you should try out at least once to make sure you’re not falling behind unnecessarily.

How to Make Your Compound Grub Proof

How to Start an eSports Team (What You Must Know)