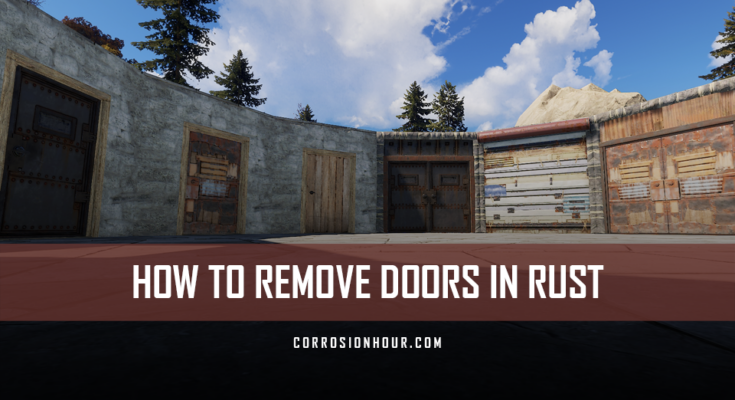 Whether It’s Your Door or an Enemies’ Door, Knowing How to Remove Doors in RUST is Essential

The more you build and raid in RUST, the more you’ll learn about positioning doors within bases to a significant effect. Maybe you didn’t know how to set things up correctly the first time around, or perhaps you have figured out the layout of a juicy raid target.

Here’s a list of the different types of doors and their health:

Doors in RUST come in all shapes and sizes.

Depending on the type of door you come across, there are several ways of removing them. The optimal tools needed will change depending on what kind of door you plan to remove.

There are several ways to remove doors in RUST.

So you’ve decided to change up things in your base. You might be upgrading from wooden to metal doors, or you might have realized you made a mistake in your door placement. Having your door swing open the other way might block off a corridor, letting you shoot through the passage without anyone being able to get in. 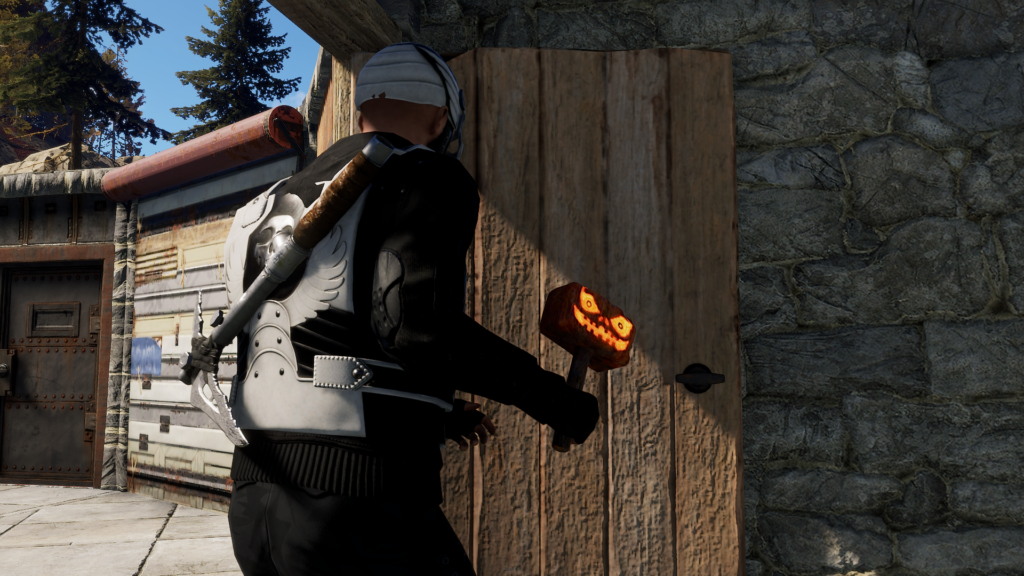 That’s all it takes to remove single and double doors. However, if you’re trying to remove a garage door or vertical hatch that you own, you will need to follow the same steps with the addition of holding a crafting hammer. Open the door, unlock it, remove the lock, and with the hammer equipped, hold the E key down on the door to see the pickup prompt.

If you remove a single door to replace it with a double door, you will have to remove the door frame. It’s a slow process, but necessary if you want to change to double doors. If the door frame is stone or wood, you can pick it out from the soft-side.

Soft-side is identified by a smoother, less detailed texture. Choose a tool or any tools and start hacking away at the wall. If there are multiple people in the base, this process can be sped up considerably by having more than one person hacking the wall at a time.

If the frame has been upgraded beyond the stone, metal, or armored, it will take an unreasonable amount of time to remove the door frame with tools, and you are better off using your own raiding tools to blast it out if necessary.

Fortunately, garage doors and different double door types share the same door frame building component and will not need to be destroyed to upgrade.

Note that picking through a soft side for a base you have entered is a viable tactic for bypassing doors on bases you’ve raided. However, it is slow and noisy work. Any player walking by will be able to identify the noise by its consistency and pitch. As such, it’s not a highly advisable tactic to get around doors unless you’re on a tight budget.

Wooden doors in RUST are highly susceptible to fire damage. You can light them on fire using either flame arrows or the flamethrower. Both methods are considerably quieter than using explosives or hacking away at the door with melee tools. Fire does have a slight crackling sound that is unique and when the door inevitably gives away, it will also make a collapsing sound that can be heard in the vicinity. 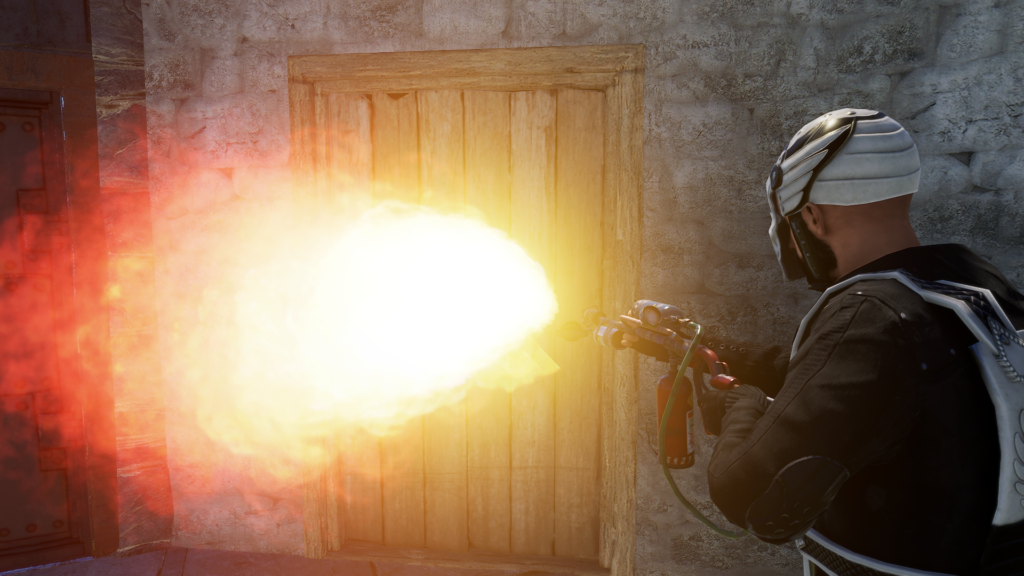 Smart players will upgrade their doors to sheet metal before logging off for the night, however, newer players or players who had to log out in a pinch may leave a temporary wooden door up. Time is of the essence if you find a target base with wooden doors, be sure to capitalize on it.

If you have a team of 3+ players, using melee weapons and tools such as hatchets can effectively brute force through the door, especially if you have access to the soft side of the door.

Once the most powerful raiding tool in the game, explosive ammo, is precise and efficient when peeling open a base by plucking off doors. Until a recent patch, a silenced weapon firing explosive rounds made almost no sound at all. Now they do make noise, though it is still considerably muffled compared to the more extensive explosive tools. 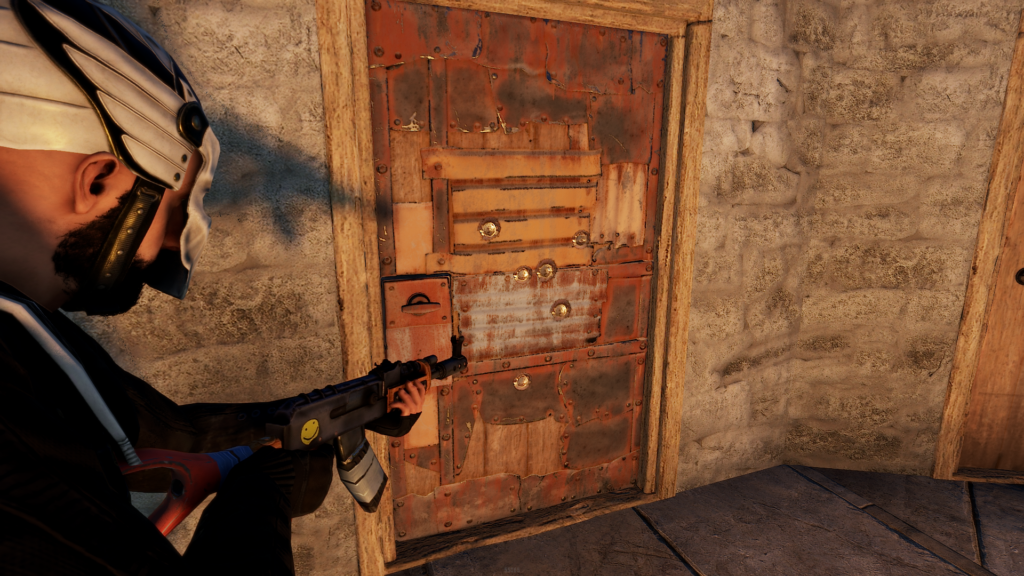 To remove a door with explosive ammo, you will need a different amount depending on what the door is made of. It does not matter whether it is a single or double door; the doors have the same health. For instance, here’s a few example doors:

Explosive rounds have splash damage, so if you need to destroy two things, aim as close to the second thing you want to destroy while still hitting the frame of the door you’re eliminating.

While the silencer’s trick has been significantly nerfed, it is still worth doing to reduce noise. Ignore the silencer text that says it reduces bullet damage. While that is true, the explosion from the explosive round and not the bullet impact is what does the primary damage.

Considering wooden doors only have 200 hp and are prone to burning, it is worth saving your more effective raiding tools for sturdier doors. While 6 bean-can grenades could be used to remove a wooden door, it is not a cost-effective or smart solution. The sound alone will draw every nearby player, as bean-cans are such a low tier item. 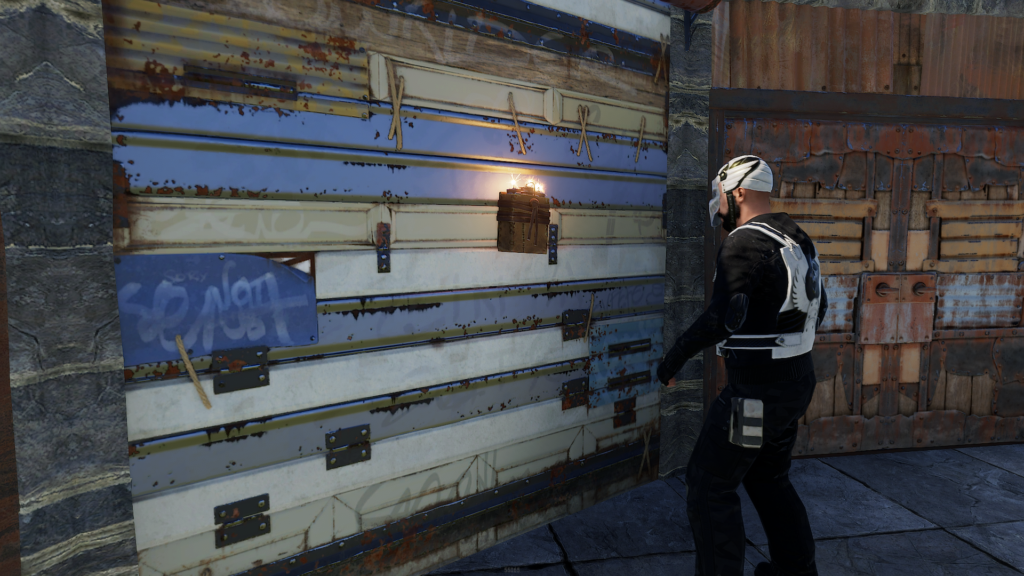 Make sure the satchels are landing on the door. If your aim is off and you land one on the doorframe instead, the explosive will not damage the door as they have no splash damage radius. Explosive Satchels can take a varying amount of time to god off, so simply wait them out.

The major downside to satchels is their ability to fail. Randomly, a satchel fuse can fizzle out, without triggering the explosive. When this happens, wait for the other explosives to go off, approach the broken satchel, and press E on it. It’s essential to be aware of your surroundings while doing this as satchels have a chance to either be picked up or re-light for an undetermined amount of time. It’s a good idea to plan to run if you have to press E on a satchel.

Beyond sheet metal doors, raiding with satchels becomes highly inefficient, and other tools can be used to get the job done faster. Keep in mind as you approach armored doors, you will need up to 12 satchels, which could take you the better part of 5-10 minutes to apply. This will give counter-raiders or online raiders plenty of time to prepare. In the regrettable event that several explosive satchels fizzle, defenders may even find time to repair doors, undoing all your hard work. 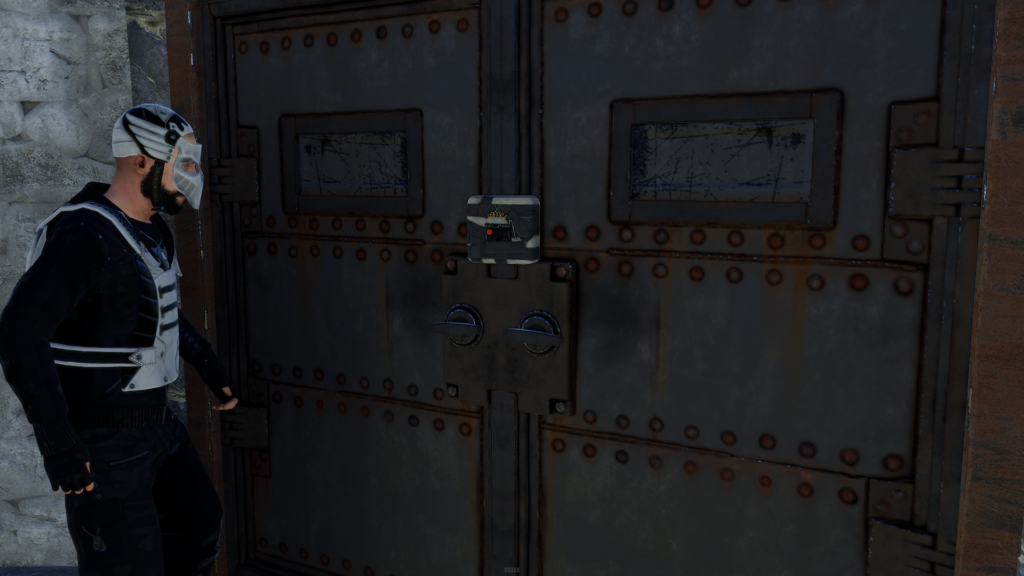 Without competition, the timed-explosive is the fastest of the door raiding tools. Hatches, wooden, and sheet metal doors only require one timed-explosive, and both the garage and armored-door need two.

They are, however, a precious commodity, requiring tech trash to craft them. So save time-explosives for raids where you need to be fast and efficient.

How to utilize rockets when removing doors is very situational. The rocket must be fired from a launcher and given plenty of space to mitigate being caught in your rockets splash damage. The upside is that the splash damage to surrounding surfaces is considerable and can be utilized to destroy extra doors, walls, and ceilings.

If you compare damage to defense, it would be right to assume that a sheet metal door requires two rockets. However, the damage a single rocket does is high enough that a handful of explosive rounds following it is enough to destroy a sheet-metal door. Unfortunately, the same can’t be said for garage and armored doors, which require 3 and 4 rockets, respectively.

Once a door requires 3 or more rockets, it is smart to start firing them so that the splash damage begins to take down the surrounding walls. A wall removed in the right place might end up circumventing several doors.

All the Treasures of the World

Now that you know how to remove doors in RUST, the glittering prizes await you. Enemy bases are not the impenetrable fortress they appear, but simple mathematics. Once you get into the habit of raiding, you’ll be able to look at the base from the outside and make accurate guesses at how many doors or walls you’ll need to work your way through to get to the tool cupboard, and most importantly, all that juicy loot. With that said, you might also want to consider learning how to remove walls in RUST.