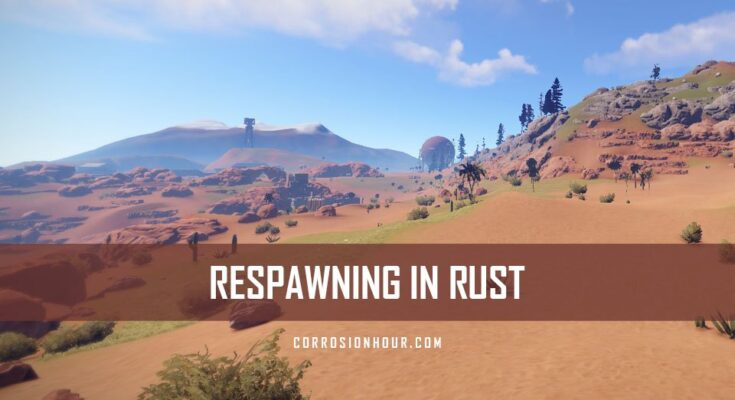 When first logging into RUST, players will be randomly positioned on the coastal lines of the game map, and never placed inland. You will also notice that you do not spawn in the northern climate zones, which prevents you from freezing to death. The game does not offer players a choice of where they can spawn in at the start, but be assured it will always be on the beach. This ultimately leads people to want to know how to re-spawn in RUST.

There are a few mechanics in the game that allows players to move around the map and re-spawning is one. Often, players want to re-spawn into a different location for a few reasons:

Re-spawning in RUST through in-game Suicide

Dying or player suicide, whether it was caused due to the environment, wildlife, helicopter NPC, other players, or self-inflicted via the command console, this method will allow players the option to re-spawn in a completely random location on the coastline or be able to select from a series of locations. Players must have placed a “sleeping bag” or “bed” somewhere on the map in order to have the additional locations to choose from. Also note, other players can set sleeping bags and beds down for their friends and assign them. Currently, there is a limit of roughly 17 sleeping bags being visible in the UI.

This method does not allow players to maintain their character’s inventory or worn gear. Items that were worn by the character, in the inventory or hot bar upon death will be left on the corpse until the player’s corpse has de-spawned.

In order to use the console command for re-spawning in RUST, simply press F1 (once, while in-game), and type the following command: