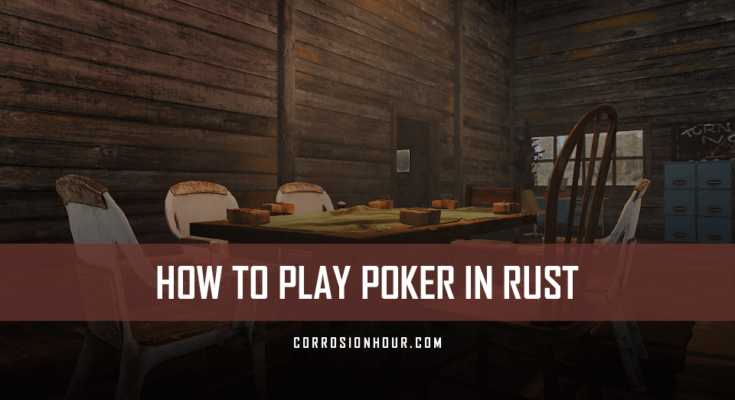 How to play poker in RUST

Poker tables have been dropped at the bandit camp as a part of the April 2021 Gestures Update. Players can now play the Texas Hold’em mini-game in a bid to win all of their opponents’ Scrap–but if you are not familiar with how to play Texas Hold’em poker, you may be in for some rage-quitting and card table flipping.

Where are the poker tables in RUST

There are five tables to play poker at the Bandit Camp, each with a varying player limit.

There are two two-player tables at the camp, one down near the Air-Wolf shop and another table at the produce store. Over at the miscellaneous store, there is a larger table for three players.

How to start a poker game in RUST

You’ll need a minimum of two players to begin a game of poker. Choose any seat available at the table and look down at the storage pouch in front of you.

You must put a minimum of 100 scrap into the storage pouch to join the game. Once you’ve placed your scrap in the bag, look at the center of the table and press ‘E’.

Once there are enough players to begin, this will begin the game. You can join an ongoing game if you like, but you can’t join during a hand. Joining is the same as starting a game, but you’ll have to wait patiently for the current hand to finish.

You can also walk away at any point so long as you don’t have an active bet on the table. If you do choose to leave a game, you will fold and forfeit any sitting bets.

Any winnings or whatever meager scraps you have left are in the pouch, but you’ll automatically put it in your inventory when you stand up to leave.

The poker interface in RUST

Once you sit down at a table, there are several changes to the standard RUST interface. First of all, you will lose access to the Global chat and will enter a private chat for the table. Secondly, a notification band has now appeared above your health bar, alerting you that you can hold ‘Space’ in order to leave the table.

Instead, you will have a list of the players on the left side of the screen. This list will show their name, their current bet, and their total scrap pile.

It will also indicate their role in the current round. If they have a small grey D, they are the dealer, and the yellow SB or BB is the small-blind and big-blind, meaning they were obliged to bet at the beginning of the hand.

This list is also where the interface displays your cards and your opponents’ once they reveal during the showdown. Just to the right of their cards, you can see what their last move was.

You can see the options you have this turn and how long you have left to decide at the bottom right of your screen. You get 30 seconds to make a decision based on the options presented.

On the center-top of the screen, you will see the community cards as they turn over. These are the cards you combine with your cards to produce a hand. Just below the cards, you’ll see the total pot value in grey.

The basics of Texas Hold ’em in RUST

Texas Hold ’em is a popular variation of poker where players combine two private cards with five community cards to produce a hand. The game starts with a dealer, whose role rotates clockwise around the table each round.

Immediately left of the dealer is the small blind player, who is obligated to place a small bet. IF there are more than two players, the player following them is the big blind, who places a slightly larger bet to get the pot started.

The pot is the collection of bets each player makes, and the player with the winning hand takes the pot. Players can also draw to split the pot.

Once each player has their two cards, starting with the player after the big blind, the players can call to match the blinds’ bet, raise to increase the bet, fold to surrender, or sit if nobody challenges their last bet.

Players continue to call, raise or fold around the table until all bets are equal. Once that’s the case, all players move their bet to the pot.

If all other players fold, the remaining player takes the pot by default.

The next step is for the dealer to lay out three of the community cards. Depending on their hand’s value, or their ability to bluff, the players will begin another betting round.

Betting operates the same way as the last round, except for starting with the player to the dealer’s left. If the player does not want to place a bet, they can check to continue without betting. However, if a player following them does not agree to check, they will have to bet to continue once the betting reaches the first player again.

If all players check or all have bet, the game moves onto the next stage.

On the turn, the dealer reveals the fourth community card, and another round of betting begins. The same rules apply as on the flop.

The dealer reveals the fifth community card, and there is a final round of betting leading into the showdown.

During the showdown, all players have either bet to match or folded and are no longer in the game. The remaining players show their two cards and reveal their worth when combined with the community cards.

There are two elements to each card, its value, and its suit. Each card has a letter or number value; 2-3-4-5-6-7-8-9-10-Jack-Queen-King-Ace. The Ace sits at the high end of card value, except for when it counts as the number one in a straight.

The card’s suit is the family it belongs to, Hearts, Diamonds, Spades or Clubs. Indicated by the small symbol below the card’s value.

The hand rankings are as follows in order of worst to best.

Any time two of the same hand is in play, the hand with the highest card is the winner. If the high cards match, the pot will split between the winners.

Know when to walk away

Like all gambling, poker in RUST can be addictive. The rush of a winning streak, to string out the losses until they turn around. But there’s always a point when it’s time to call it quits. Don’t be goaded by players objecting to you leaving the table.  And always be prepared to leave with a lot less than you started. Hopefully, you’re now armed with a pretty good deck of knowledge for playing better hands of poker.