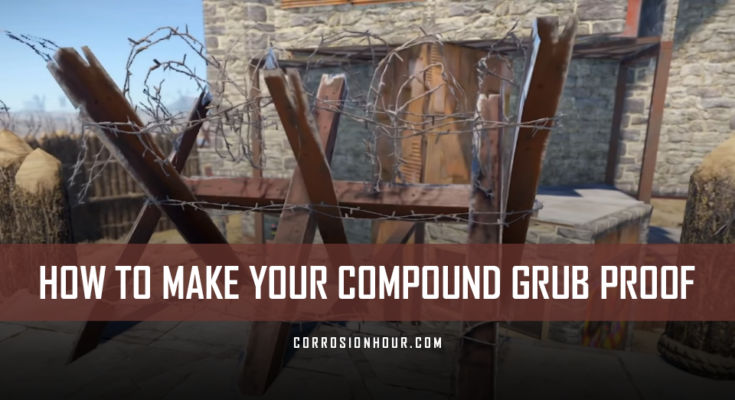 Don’t make yourself a grub target

This building tip video was created by our partner Cosmonatic Films.

It feels pretty bad to log into the game and find out that you were grubbed while offline. Even if your compound seems well-secured and you took extra measures to protect against offline attacks, somehow, some way, a resourceful grub found a way in and looted your pumpkins and furnaces. And while there’s no way to make any compound 100% grub-proof, there are many things you can do to make your compound less of a juicy target.

In this video, you’ll learn some common mistakes and problems that occur during base builds that flag your compound as a target for grubs. Some mistakes are apparent, like leaving a gap in your high external walls, while others are not obvious or perhaps unavoidable due to building constraints with the terrain.

Additionally, you will learn several methods to deter and combat grub tactics to protect your compound from attack or becoming a target in the first place. You won’t be able to fend off all grubs, but if you follow these tips for grub-proofing your compound, you will learn to repel more grubs than you invite.

Without further ado, here are some tips to grub-proof your RUST compounds.

Today, I’ve got a short guide on how to make your compounds virtually ‘ungrubbable.’

Now, of course, nothing will ever be truly grub-proof, only resistant.

Ultimately the goal is to make it not worth their time to discourage a grub attempt.

So, with that being said- let’s get into the guide.

Terrain plays a big role in the ability of grubs to sneak into your compound.

Less than ideal terrain can allow players to build right over your walls, exploit gaps, or cheese your defenses.

Given the unpredictability of terrain, sometimes you have to deal with the cards dealt to you, but you should always make an effort to build in a location that keeps future expansion in mind.

Ideally, you should be trying to build your bases on top of a peak in the terrain- preferably far from cliffs.

Unfortunately, many advanced builds require lots of flat terrain, which is usually next to cliffs. If possible, try your best to build as far as you can from those.

Next up, let’s talk about some tactics that grubs use.

To truly understand how to repel grubs, you have to think like a grub.

The purpose of grubbing is to swindle lazy players of loot by exploiting weaknesses in a base’s design or in a group’s incompetence.

Some tactics used by grubs include:

Fortunately, there are many things you can do to deter would-be grubbers, or at the very least, limit their success.

When building your compound, you should always be thinking about ways that a grub could exploit an oversight.

If you notice a potential weak spot, do your best to limit its effectiveness by using some of these tips.

This should be an obvious one, but making sure you don’t leave any gaps in your building privilege around your compound is critical.

Furthermore, external TCs should be below the height of the high walls to prevent players from building twig to clear the barbed wire.

Depending on the space, you may also consider extending your building privilege by placing extra foundations in your compound.

Personally, I prefer using external TCs because if foundations are placed too close to the high walls, it can make replacing them difficult.

For door campers, use high visibility gatehouses to limit the spots where a grub can hide to catch you off guard.

When leaving your compound, stay vigilant for grubs camping behind external TCs.

If you’re using a high external gate, consider incorporating an airlock into it by placing a wall where the doors are in the open position.

If possible, always store minicopters, horses, boats, and cars behind locked doors or in line of sight of an auto turret that cannot be easily destroyed or baited.

Avoid exposed soft sides, especially on foundations. When possible, double up foundations and or upgrade them. For bases that include external TCs, you should use anti soft side measures to prevent players from disconnecting your externals from you. Frames are best for this as they can’t be soft-sided at all.

Place high walls as flush as possible to limit spots where players can easily transfer items out. For awkward terrain, placing walls as evenly as possible will limit opportunities for grubs to build in.

Barricades should be used anywhere that may give a grub a surface to stand on. They can also be used in troublesome spots.

Metal barricades can only do so much- if applicable, persistent grubs can build twig on the structure that is holding the barricade to bypass the barriers or high wall.

-Another obvious counter to grubs is auto-turrets.

However, a common mistake a lot of players make is having turrets in a spot where they can be exploited if left unattended.

I prefer to keep my turrets hidden behind garage doors and controllable from smart switches attached to door controllers. Doing this allows you to control when the turrets are exposed so you can take the choice away from the grub.

The obvious downside is that it can leave your compound unprotected from players or raids while you’re not online.

For advanced electricians, you can hook up the doors to an automated system by using the heartbeat sensor- but expert grubs can trick the sensor to cheese your turrets.

One of the most elegant and overpowered solutions at the time of this recording is the use of chain link fences. Chain link fences have a bizarre quirk about them where player’s projectiles and melee damage deal 0 hit points to a target through the fence.

The auto-turrets, however, can track and shoot straight through the chain link and deal full projectile damage. This method effectively makes the turrets basically grub-proof to primitive attacks.

However, splash damage and fire *will still damage* the turret through the chain-link fence.

Where possible, auto-turrets should be low to the ground to prevent players from crouching under their line of sight to melee them.

Depending on the size of the base and the space in the compound, inward-facing auto-turrets can limit the angles grubs have to compound bow out turrets.

Finally, perhaps the greatest deterrent of them all is the most simple- do not give the grub a reason to jump into your compound.

Avoid having boxes, mixing tables, or other deployables in the compound.

If you have furnaces running, do not leave them unattended. Refrain from cooking sulfur in outside furnaces. Avoid putting large amounts in. And never leave resources overnight.

Ultimately, no amount of measures or defenses can keep the truly dedicated from getting inside your compound.

No matter how many barricades, electrical deployables, or turrets you have- the grub will always find a way in with his single humble ladder.

However, if you build your compound well enough and are thorough with the measures you’re using, I am confident you will deter most grubs from wasting their time on it.

In the end, the success of your efforts will come down to your due diligence. And that’s the key to being grub-proof.