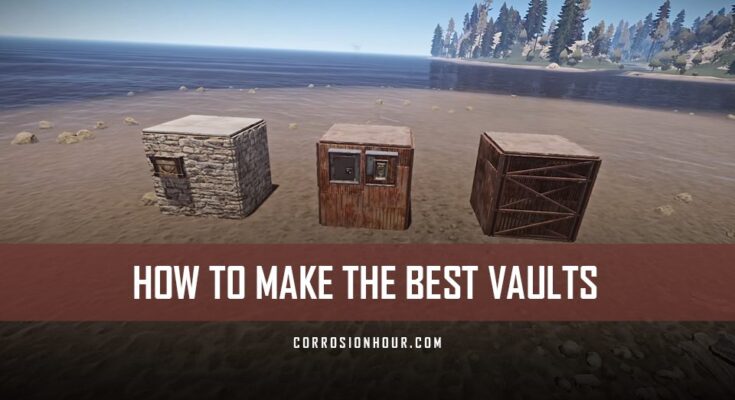 How to Make the Best Vault in RUST

This RUST base design video,  How to Make the Best Vault, is brought to you by our partner Cruxal.

In this video, Cruxal walks through a couple of quick and simple ways to make the best vault’s in RUST and how to effectively hide them from raiders. If you’ve seen bunker designs, you’ve likely happened across a vault, as the two are often used in conjunction and both help to hide your loot somewhere deep and potentially unexpected in the base’s design. After watching Cruxal’s video, you’ll be able to very easily incorporate vaults into your existing design and learn how to quickly build them into your initial starter bases.

Not bunker, not roof bunkers, vaults. The ones you have to respawn into, to get access. So what is a vault exactly? Here’s a short description:

Webster English Dictionary: a room, especially in a bank, with thick walls and a strong door, used to store money or valuable things in safe conditions:

RUST Slang: an area for storage and valuables with no entrances. It is only accessible by spawning directly inside of raiding into it.

In this video, I’m going to show you some quick, effective ways to build them and how to hide your vault.

Vaults are one of the most secure ways to hide some of your precious belongings. The most common vaults use drop boxes, like this one.

You can easily get a dropbox from the outpost for 40 scrap, and you’re done. If they get destroyed, they can get easily replaced. The downside of this method is that it makes it very obvious where your vault is.

The second option, which I first saw on Vice’s channel, is by placing a large box through the wall. This is by far the cheapest method there is. The downsides are like dropboxes, it sticks out of the wall like a sore thumb, and even new players will immediately know there’s a vault. Not only that, but if the box gets broken by raiders or by accident, you can’t replace it, and you’ll have to resort to dropboxes.

The last method is a method I haven’t seen, but it probably used already. It consists of a trick from budsatawny, by placing a BBQ a certain way against a wall, which makes you able to lot it through backward metal and HQ walls.

The back of the BBQ has to be against the wall.

Then, if you place a workbench level three in front of the barbeque, it becomes immutable unless you rotate the workbench, which can only be done if you have access to the TC. This greatly reduces the chances of your vault being found.

The downside to this method, just like Vice’s concept, is that the barbeque can be broken easily since it technically sticks through the walls. Splash damage from outside the vault will break it. You’ll then have to resort to drop boxes.

I did, however, find that the barbeque doesn’t break when the wall is upgraded to HQ, so upgraded to HQ is a good idea to keep your barbeque from breaking.

If your barbeque has been broken and you need to place drop boxes, simply rotate your workbench, which leaves enough space for them to be placed from the inside of the vault. This only works with a tier 3 workbench.

There’s a ton of things you can do with vaults, but one thing you can’t do is for cryptocurrency like salad does. Salad.io is a very small easy-to-use program that farms cryptocurrency while you’re AFK and lets you spend it immediately on really awesome things that gamers need, like Discord Nitro, rust skins, games and gift cards. Running the program is also called salad chopping and you won’t need to chop that long to get worthwhile rewards. Check it out for yourself. If you’d like to download salad, head to salad.io

Something really important to take note of is that the methods I’ve shown are purely examples. Vaults don’t have to be one by ones, they can be any size or shape. You can build it inside honeycombs, inside a bunk, inbetween floor levels, you name it. Just remember that the harder it is to find, the safer your loot is. Let me show you a quick example.

Here we have a pretty basic starter base. If we check out the vault, we can see that the barbeque is used to pass through loot and the boxes are above in the top honeycomb. To make this safer, we could build a second floor on top of it to hide it some more. I think you get the point.

I wanted to take a few short minutes to show how effect vaults can be. If you pair vaults with some other building tricks you’ll be on your way to a base no one wants to raid. If you’d like to share some design ideas, head to my discord. I’d like to see how you incorporated a vault into your base. I’m also thinking of featuring cool community bases, so feel free to show off your base.

Let me know what you’d like to see next. I’m eager to make other little segment videos.

See you in the next one. 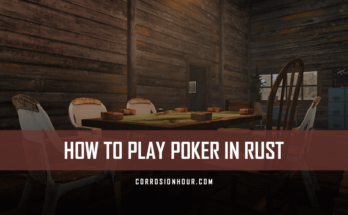 How to Play Texas Hold’em Poker in RUST