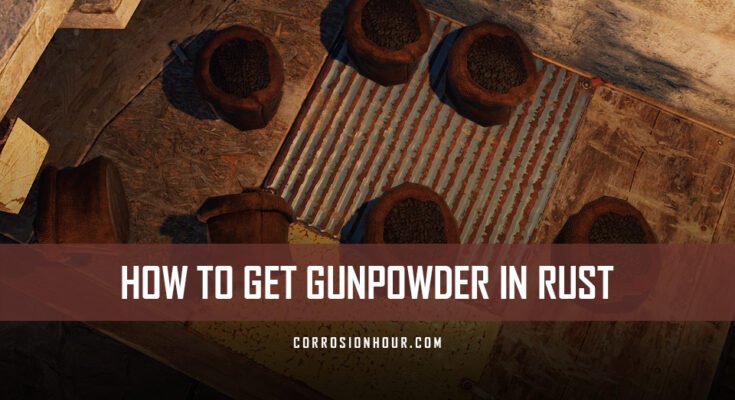 Little booms, big booms, and all booms in between require gunpowder in RUST.

If you’re making your way to the endgame or just starting your raiding career, you must learn how to craft gunpowder. As the crucial ingredient in all RUST explosives, having a firm grasp of how to prepare, find, or steal gunpowder will put you miles ahead of your RUST server’s competitors.

With gunpowder, you’ll have the ability to:

There are several methods for getting your hands on gunpowder in RUST. Each of which applies to different levels of play and your preferred playstyle. Some are safe, while others come with additional risk, and you’ll need to evaluate which method works best for you.

The three primary methods of getting gunpowder in RUST are:

Crafting gunpowder at a workbench

The most dependable method for getting your hands on gunpowder is merely taking the time to mine sulfur in RUST. Even if you’re going out to grab stone or metal for your early base building, it’s worth your time to catch any sulfur nodes you see.

For more tips on sulfur, check out our guide on finding sulfur in RUST.

Once you’ve brought home your sulfur or metal, you’ll have to cook it in a small or large furnace. As luck would have it, cooking materials in a furnace is how you get your hands on charcoal, the second ingredient for gunpowder.

Wood in a furnace will burn down to charcoal as a byproduct of the smelting process. You can combine 30 charcoal with 20 cooked sulfur to produce ten gunpowder at a level one workbench or higher. 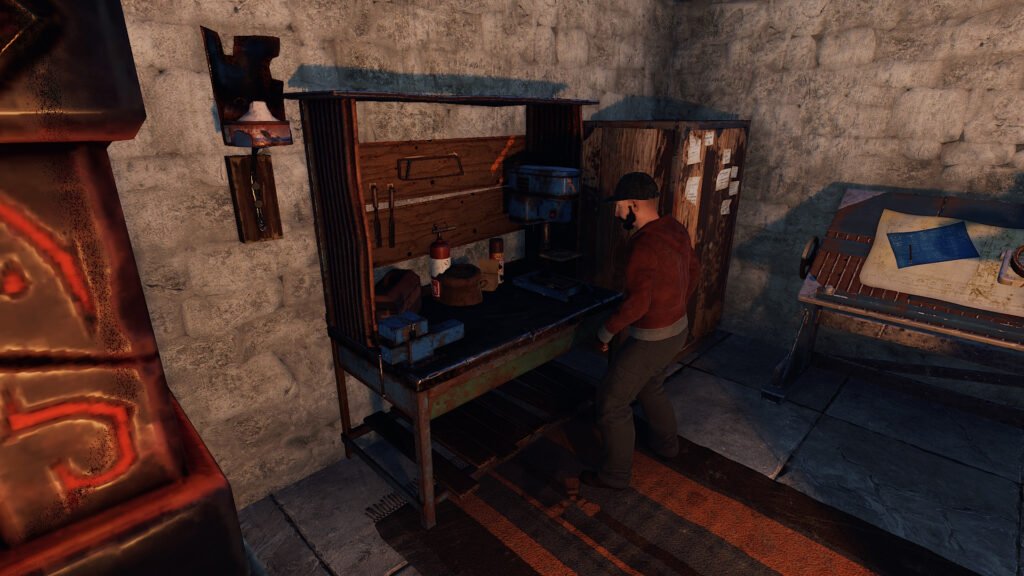 A level one workbench will take two seconds to craft, whereas a level three will only take half a second per craft. Considering how much gunpowder you’ll need by endgame, the time saved upgrading to workbench makes it well worth the investment.

Mixing gunpowder at a mixing table

Much like a workbench, you can use a mixing table to craft gunpowder in RUST. While the mixing table’s crafting time caps out a 1 second per 10 gunpowder, it comes with the advantage of reduced crafting cost.

For ten less charcoal than the workbench, a mixing table takes 20 cooked sulfur and 20 charcoal to produce ten gunpowder. While this may not seem like a substantial saving, you will often craft gunpowder by the thousands. 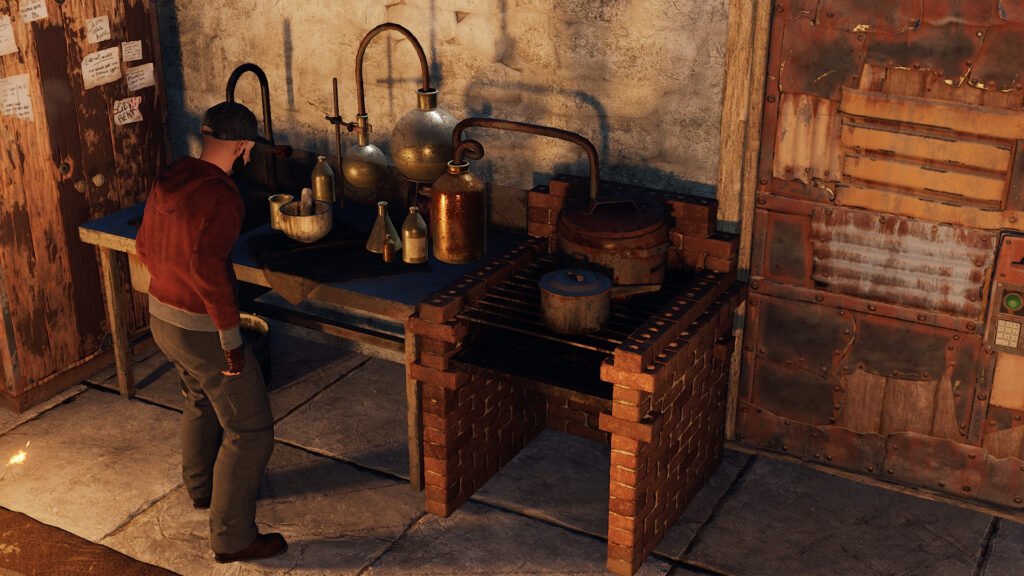 Due to this volume, ten less charcoal per craft adds up to substantial amounts. While you will naturally accumulate charcoal over time while you smelt other ingredients, it is a resource that suffers a long production time due to the time it takes furnaces to burn wood.

So save yourself some hassle and mix instead of crafting where possible.

If you’re looking to get your hands on some gunpowder in the early game and not draw attention by clearing out your local sulfur nodes, it’s possible to pick up some gunpowder scraps whenever you find yourself near a cave or mine. 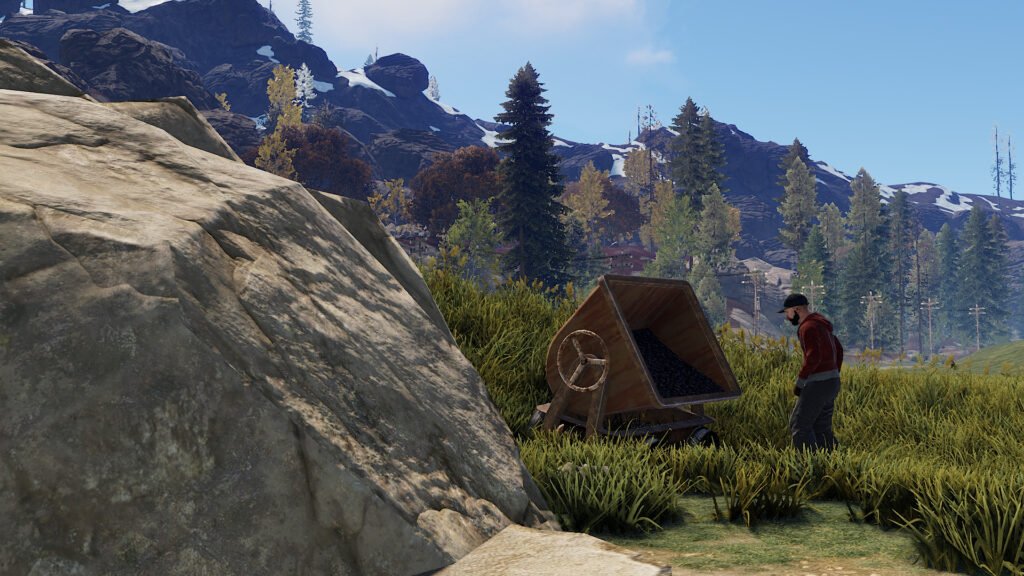 Deep inside and surrounding the caves and mines of RUST, there are spawnable mine crates and minecarts. Both of these containers have an 8% chance of dropping 15-24 gunpowder.

While this doesn’t amount to much in the long run, it’s enough to load up your eoka or double barrel with shells. You’ll be surprised how much difference low-tier weapons make in minor skirmishes during early game phases.

Another early game tactic is to unload the explosives you don’t need by running them through the recycler found at points of interest on the map. Rockets you already have the blueprints for or the stray bean-can grenades you collect around the map will all yield at least some of their production cost.

If you can’t use the explosive tools you have on hand, you might as well recycle them down to components you can utilize. Avoiding hoarding leads to disappointing raids for your enemies and lets you have more fun at the moment. 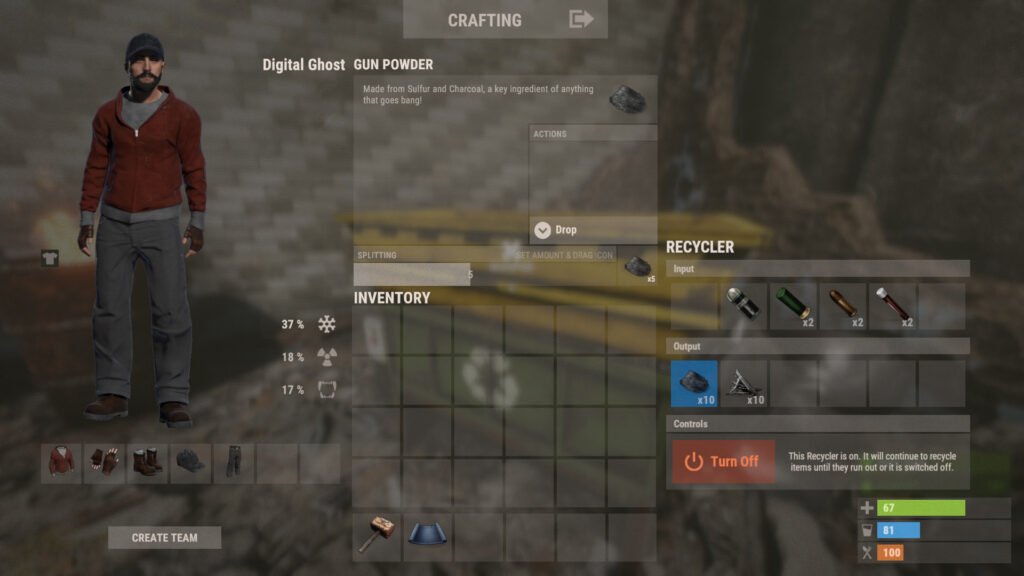 What’s more important, that incendiary rocket you might get to use someday, or 125 gunpowder that you could put to work in the guns you currently own?

The best use for your explosives is often to get your hands on other people’s explosives. Keep an eye out on your neighbors, primarily how often they go out mining. Are they clearing out all the nodes or leaving the sulfur behind? 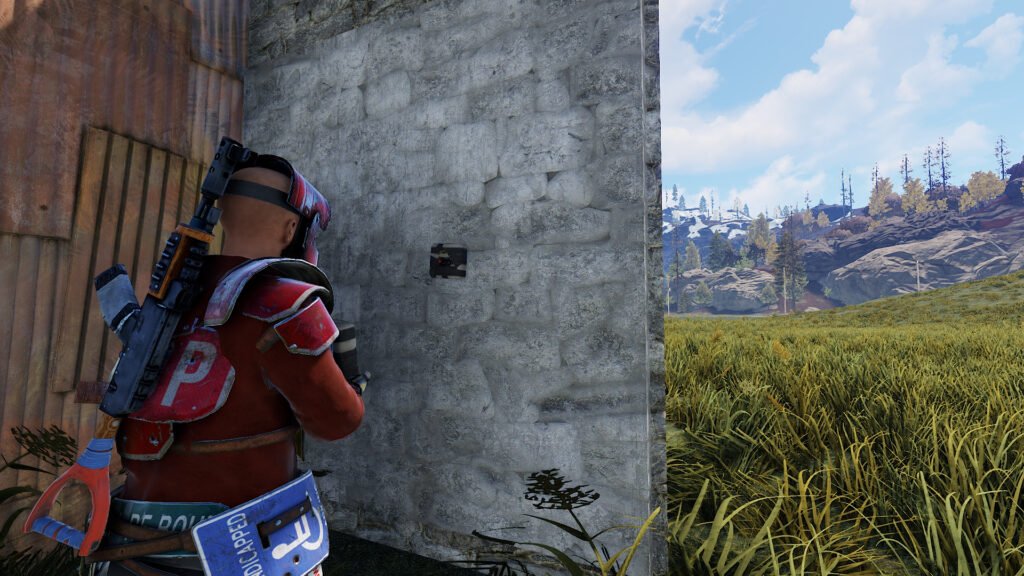 Combine that with an assessment of their base. Once you understand how many walls or doors you might have to blow to get to loot, you can assess whether or not they’re a significant raid target.

If you think they might be stockpiling sulfur or gunpowder, then spending yours to clear out their supply is a double hit of removing them from the map while restocking your supplies for your next hit.

Or if you know when and where they go to mine, hit them on their way back to base for easy sulfur.

Gunpowder in RUST is the prize of prizes

While players tend to hoard sulfur, if you open those boxes after a hectic raid and they’ve saved you the time and effort of crafting that gunpowder, count your blessings.

Figure out which is the best way from the methods listed above. Some people enjoy farming and mining. No doubt, that gathering just as viable a method of getting your hands on gunpowder as it is to collect it from other people’s bases.

So give each method a shot and see what works best for you.