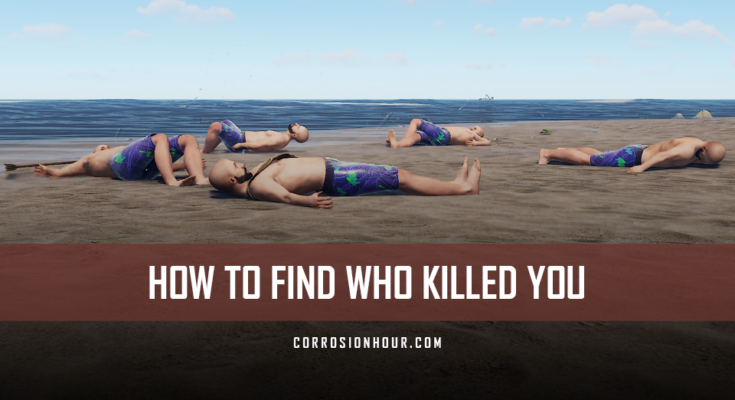 To Know Your Enemy, You Need to Know How to Find Who Killed You in RUST

Revenge is a dish best served cold, is a famous saying among Klingons and French diplomats. And it applies to the world of RUST too. One of the most common shortcomings in RUST is to get tilted after losing a costly kit or your most precious loot to a player, then to step out unprepared, guns blazing at whatever players are nearby. Without knowing how to find who killed you in RUST, you run the risk of engaging players who would otherwise ignore you, angering your neighbors, and opening yourself up to becoming a raid target as the ‘local nuisance.’

Fortunately for all, Facepunch has made it very easy to get the information regarding:

There are five ways of getting the information you need to find who killed you in RUST.

Upon your death, you feel the temptation to hit that respawn button as quickly as possible to get straight back into the action. It’s a good idea to take a moment, a deep breath, and then have a look at the top center of your “death” screen for some insightful information to your ultimate demise. 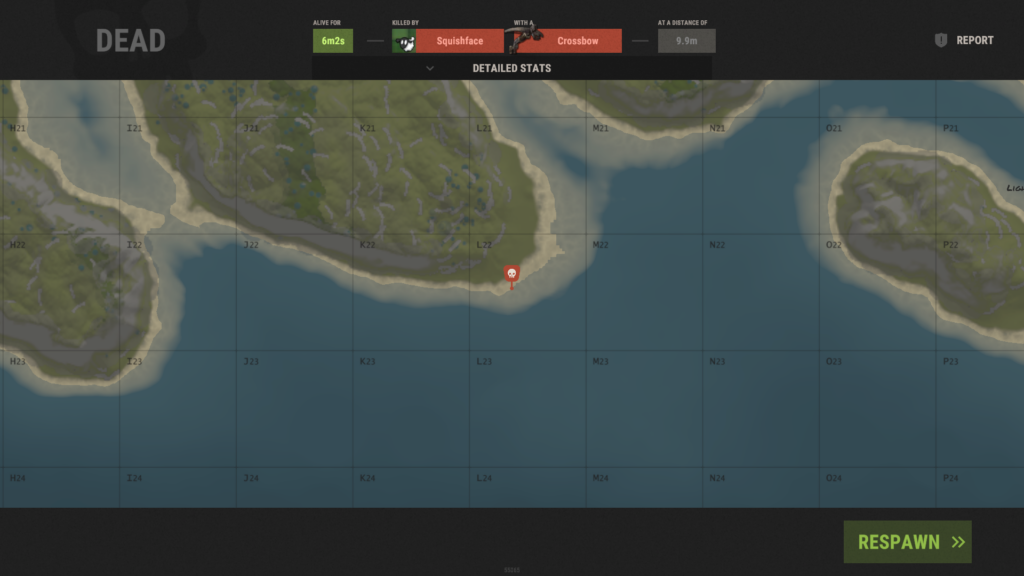 There will be three text boxes with useful information regarding:

If you are aware of your PVP-enabled neighbors, this might be enough for you to understand what happened and dive straight back into combat with some intel. Still, if you don’t recognize the player’s name, it might be worth your while to wait a moment longer and do some investigation.

After an incredibly hectic fight, where there were opportunities to heal, pressing the detailed stats to drop down just under the ‘Killed By’ window will give you some more information. 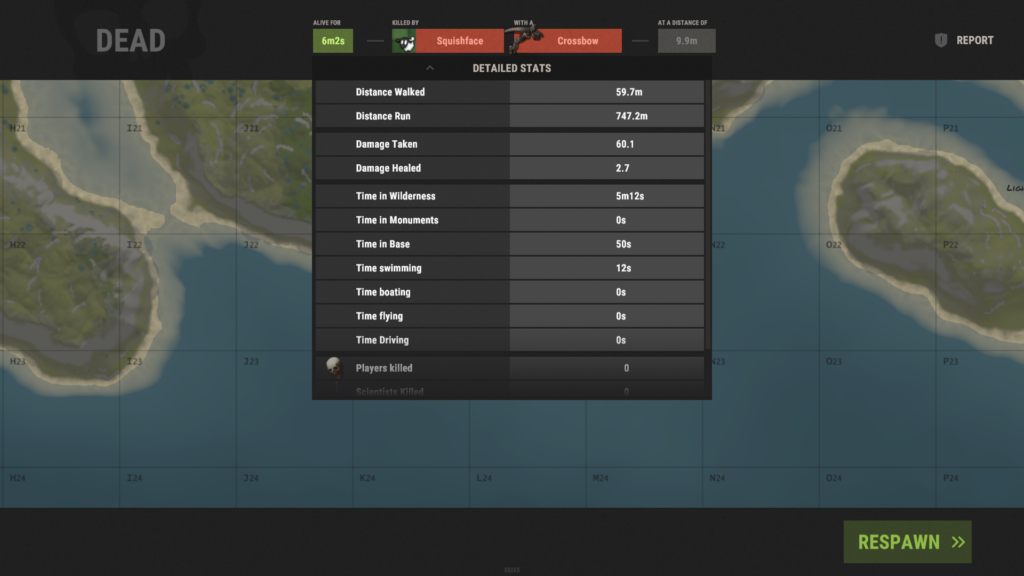 In particular, this window gives you the information on how much damage you managed to heal during combat. It also shows a running total of the number of players you killed during the skirmish. You may be wondering what happened, as you managed to put down at least one or two during the fight. The ‘Players Killed’ will give you the info on how many died or were helped back up.

Finding who killed you in RUST with the combat log

If you accidentally respawn too fast or didn’t entirely absorb the information you saw above, you can press the F1 key to bring up RUST’s command console. In the console type, ‘combat log‘ and the news you missed should be written there, albeit in a less stylized listing. 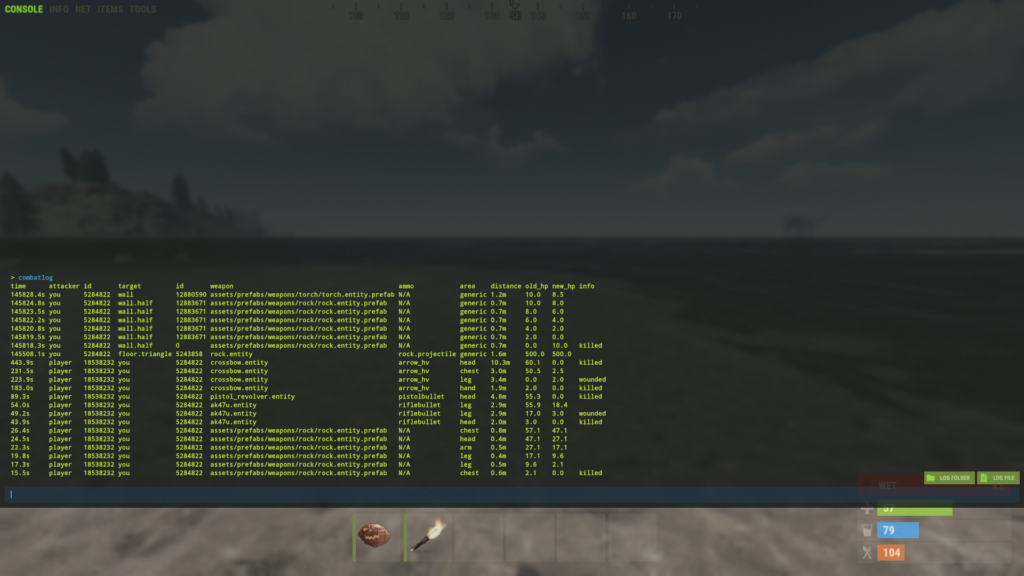 The combat log also contains a wealth of information about the battle worth diving into, especially for newer players. The combat log lists:

The attacker/target information will be listed as ‘you’ vs. ‘player’ whenever you do damage and reverse when an enemy player strikes you. Very handy for when in combat with several players. You can identify which player did what by their weapon of choice and range.

The area struck is useful in identifying your enemies’ skill and where you may be under-geared. If you took lots of blows to the arms, stomach, and feet, you might not be versing the best of the best out there. But if they’re regions you took a lot of damage in and still died, it might be worth your while to invest in armor that covers those bodily regions.

Distance fired from, and the auditory cue of the firing noises should give you a good idea of where the other players were.

Depending on what server you’re playing on, the server owners might leave a public log somewhere on their website with a running combat log that you can have a look at outside of the game. Not all servers have this feature, but for those that do, it’s handy when trying to remember what happened in ‘that one fight’ is bugging you later in the day.

For the most part, they are as detailed as the console combat log, but the information posted is at the server owner’s prerogative. This might be a feature you look for when trying to find a server to play on.

Find out who killed you in RUST by asking other players

Many players in RUST are surprisingly sociable. Although you will occasionally run into the stoic, silent type that will headshot you with a crossbow from 100 meters and silently go on with whatever dark business they were about. Your existence is a mere afterthought to them. 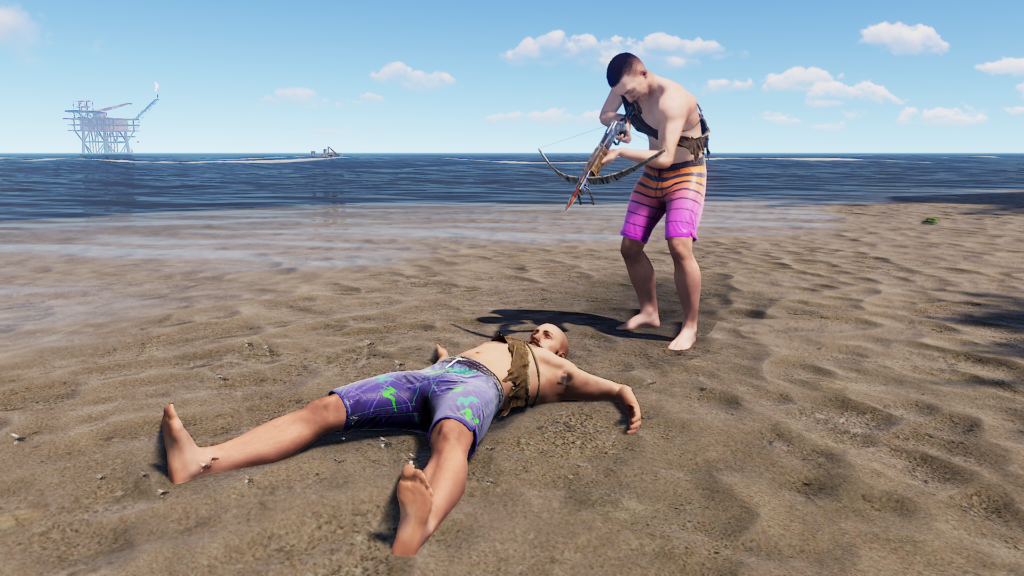 However, most players are quite chatty. If you ask in the public chat about combat that just took place, you’re more than likely to find a few players who are either willing to talk about watching or taking part in the fight.

Most players are happy to brag about ‘that shot’ they got on you or the silly thing you did that got you killed. While it’s tempting to be toxic and try to upset them in the chat, the mature thing to do is listen to what they say. No matter how toxic or immature they might be, they did ‘win’ the encounter. If all they expose through the bragging is that they had better numbers, guns, or armor, you have new information, regardless of their toxicity.

When the public chat is useless, turn to your team, assuming you have one. If your team is online and scouting in different directions, perhaps one of them heard where the shots were coming from or still has an angle on the player that took you out. Like in combat-oriented games, team communication is vital.

So that’s how you find who killed you in RUST

There are more than a few ways to do it, and each has its own merits. Over time, you’ll develop the experience necessary to act as your combat log. You’ll learn to recognize the sounds of each gun, what direction they came from, and their volume to distance ratio. Until then, there are the resources like this blog available for you to learn the in’s and outs of finding out who killed you in RUST.