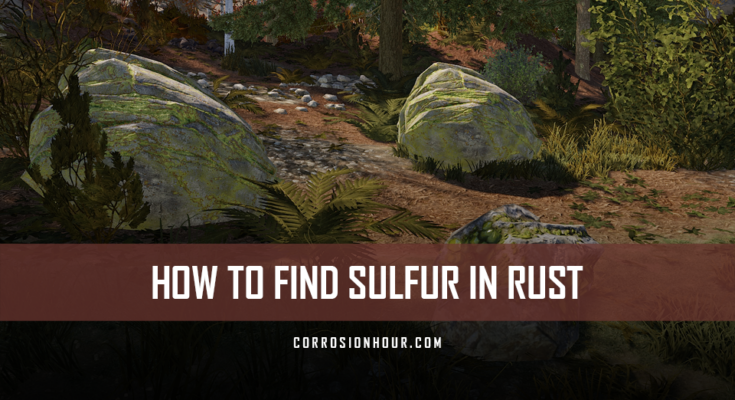 Sulfur is the End-Game Reward in RUST

There’s no sweeter reward after clearing the doors in a raid to find crates full of sulfur. But to get through those doors, you have to fill your own base’s boxes of sulfur. If you want to take part in the end-game, you’re going to have to learn how to find sulfur in RUST. Sulfur opens doors, quite literally, to the end-game of RUST PVP and entertainment.

Once you’ve got your hands on Sulfur in RUST, you’ll be able to craft:

Sulfur ore in both small and large furnaces will cook down into pure sulfur. With sulfur, you’ll be crafting gunpowder, which finds its way into all types of ammo and raiding tools. The ammunition you can craft ranges from the weakest handmade shells for your eokas and shotgun traps to the regular, explosive, and incendiary 5.56 rifle ammo variants that can be researched using the research table.

Advanced PVP tools such as grenades and landmines are only available once you’ve started collecting sulfur. As well as fireworks if you’re up for something less dangerous but still explosive.

In short, if you want to be taking part in PVP and raiding in RUST, you need to get your hands on a steady supply of sulfur.

There are 3 main ways to find sulfur in RUST

As you travel the map, you may encounter small rocks on the ground that can be picked up by walking up to them and pressing the E key as you mouse over them. You can find these small rocks like stone, metal, and sulfur. If you’re after sulfur, in particular, you will be looking for the grey rocks with yellow veins of dust running through them. 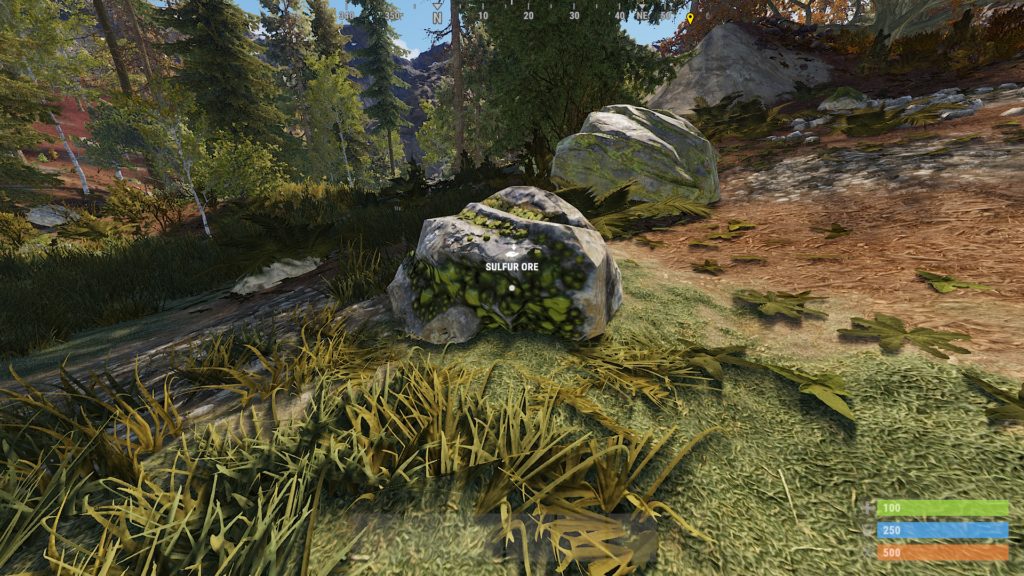 Each sulfur rock found will net you precisely 50 sulfur ore, without variation. Picking up the sulfur rocks is a handy way of getting your hands on sulfur in the early game. Sulfur nodes are not quite as common in the starting area as they are in more advanced zones. For a while, at least, sulfur rocks will be your simplest method of finding sulfur, as well as the safest.

Running around picking up sulfur rocks makes no noise, unlike your other options. And while you won’t be finding a lot of sulfur through this method, you will be finding enough to keep your pistols loaded.

Once you find your sulfur requirements increasing, you will need to branch out into one of the other collection methods.

Finding sulfur ore in rock nodes is a much more lucrative method for sulfur gathering. However, it comes with drawbacks, notably, location and noise.

Sulfur nodes can be mined, with any one of the hand mining tools available. Which mining tool you use will dictate both the yield and speed at which you destroy the sulfur node.

As you can see, the yield reaches a maximum of 300 sulfur at the Pickaxe but is mined quicker with the Salvaged Icepick. The fastest by far is the Jackhammer, which has a 1% drop rate in Tool Boxes or can be purchased from the Outpost monument for 150 scrap. The speed at which you clear a node is also affected by how well you play the mining mini-game.

When you approach a sulfur node, you will see a bright spot on the node. If you strike the shining spot, you will hear a crack and see the shining point, move to another part of the node. Each time you hit the bright spot, you increase the amount of sulfur you mine, speeding up how long it takes you to mine the node. 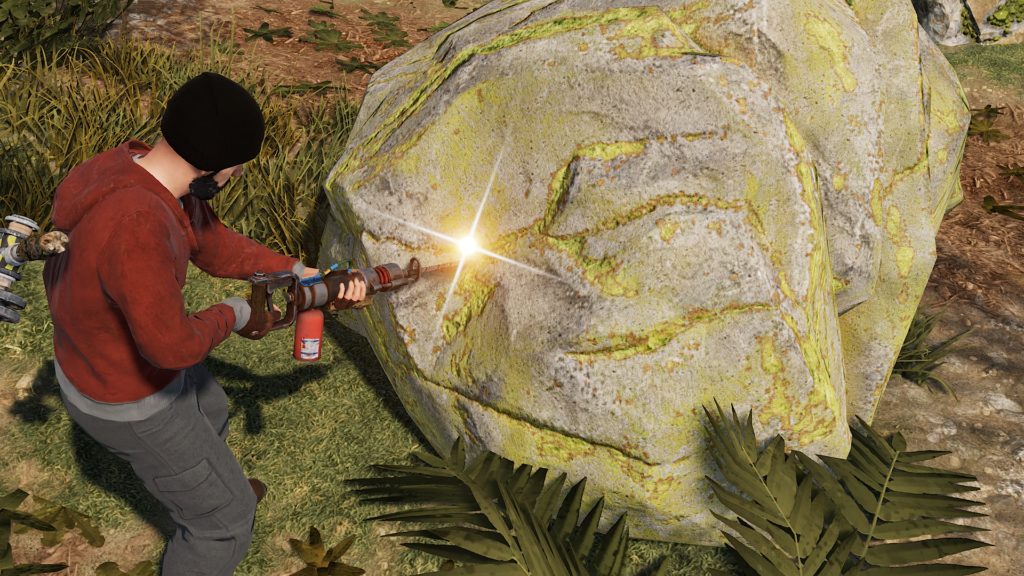 The drawback of hitting the bright spot is that you have to take your eyes off the surrounding area, allowing players to sneak up on you while you mine. The other danger to be aware of is the distinct sound mining makes. Hitting a node with a tool, especially a jackhammer, makes a loud distinctive ringing noise that tells nearby players that you are mining, and likely occupied.

They know for every tink sound of the tool is a second that you are not aiming a weapon at them. 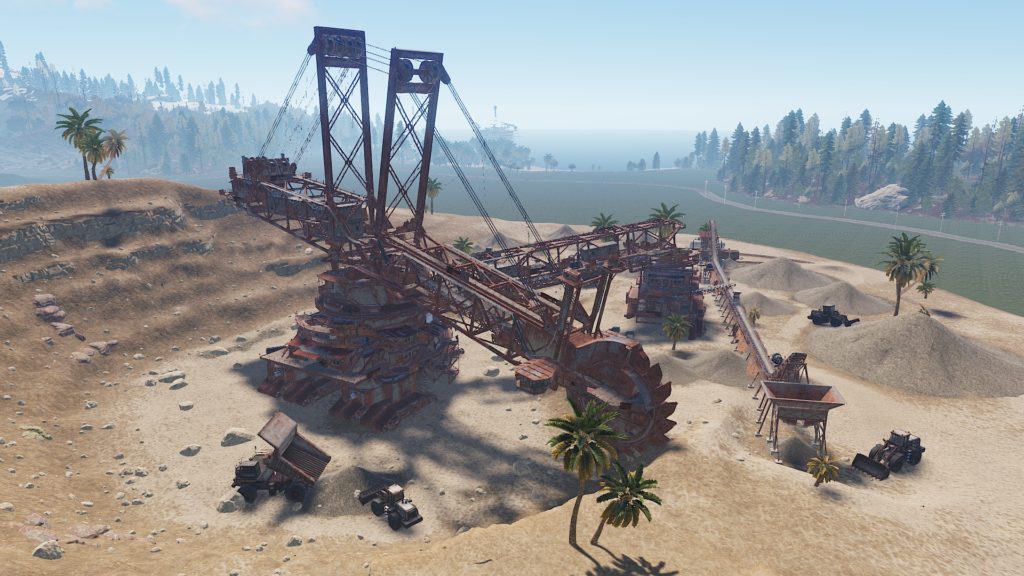 For 20 diesel fuel, you can run the Giant Excavator for 40 minutes, mining 15,000 sulfur ore. The Giant Excavator will dump the ore in lots of 375 each minute from two drop-off bins at either end of the monument.

While this sounds like a lot of sulfur, this is the highest risk method of acquiring it. The Giant Excavator’s defense by NPCs make it a highly dangerous monument, and the opportunity to swoop in and grab all that sulfur is an enticing prize for players.

Not to mention the diesel fuel required must either be found at other monuments or purchased from the outpost for low-grade fuel. When you add the time required up with the risk involved, you may have been better off finding a nice patch of nodes to farm manually.

Finding sulfur in RUST is a high risk, high reward

Unlike many other RUST resources, you cannot purchase sulfur from either the outpost or the bandit camp. You can get a tiny amount by recycling a few of the components you use sulfur to make. But the return is meager, and you would likely be using sulfur to craft those same components.

It is also the resource least likely to be traded among players, as it is the key to raiding. Giving sulfur away or dealing it opens the doors to becoming a raided target. As such, players guard it jealously. As will you.

The places sulfur appears on the map will be harvested by players regularly, making it the key to PVP and its source. When you plan to go farming for sulfur, make sure to go prepared.