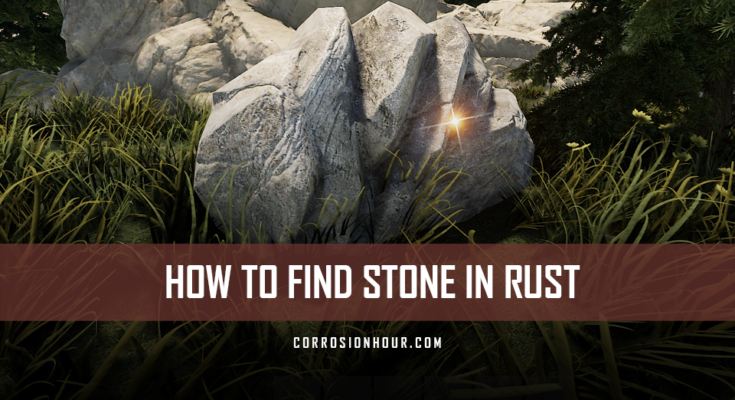 Base Security Depends on Finding Stone in RUST

Stone is an essential building component in RUST and is necessary to make stone foundations, walls, and ceilings, and several critical base components. Using stone as a base material makes your early game base designs flame-raid proof and your endgame base designs more secure from rocket raiding. So when it comes to finding stone in RUST, it’s a critical skill to hone early on.

There are 5 easy ways to find stone in RUST:

While there are multiple ways to find stone in RUST, and depending on the current stage of the wipe cycle, specific approaches will be more effective. Some techniques, such as searching for small stone rocks, are only appropriate for early game. In comparison, others can only be used later in a wipe. What’s important is finding the method of stone gathering that works for you.

Search the ground for stone rocks

As a fresh spawn, searching the surrounding area for stone pieces is the easiest way to gather stone quickly. Look down as you run around naked, and you will see stone rocks, particularly in rocky areas, although they can spawn just about anywhere. Each piece found will net you 50 stone, which will quickly get you crafting the essential tools such as a stone hatchet, stone pickaxe, stone spear, and arrows for your bow. 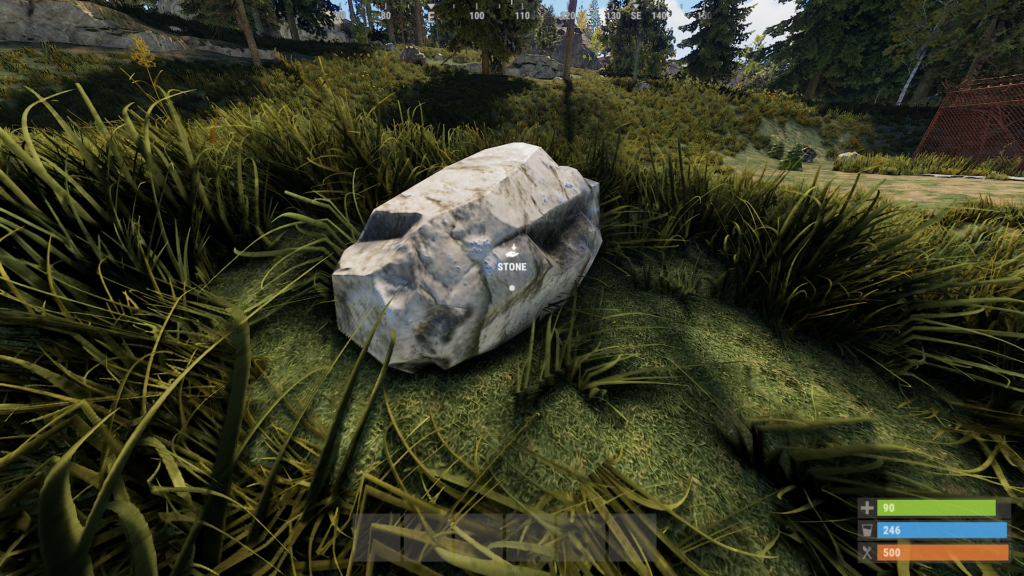 It may be tempting to start hitting a stone ore node with your rock, but you will lose two-thirds of the node yield and spend up to a minute hitting the stone ore node. Smashing your rock this early is dangerous, as it alerts other nearby players and can potentially give away your location. Once you have crafted stone tools, you can move onto a much more lucrative way of gathering stone and have a way to defend your haul.

Stone ore nodes can spawn anywhere but are found more frequently in areas with rocky features such as mountainous areas, cliffsides, boulders near the beaches, or sufficiently large stone protrusions. Not to be confused with sulfur or metal ore nodes, stone ore nodes are greyish white egg-shaped boulders with ridges and a shining point. 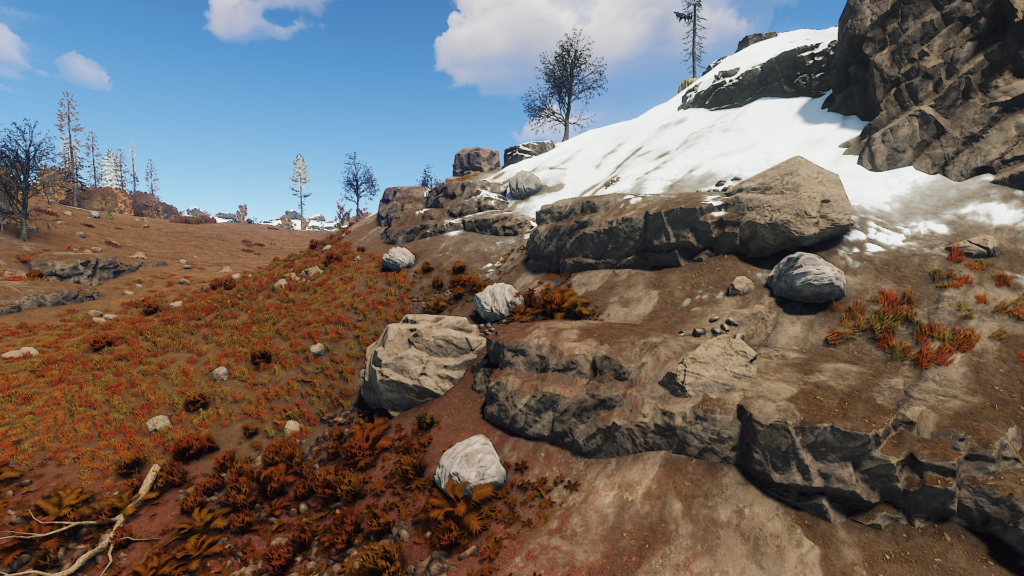 Once you have made a stone pickaxe, mining is a much more feasible option. The rate you collect and speed at which you gather changes depending on the quality of the tool you harvest stone ore.

Make sure when mining for stones that you aim and strike the nodes’ shining point of light. Hitting the light will effectively double your mining speed and increase the yield. The light will move to a new location each time you successfully hit it, so you must keep an eye on your node as you gather. You will hear a special strike-sound each time you hit it.

If it is nighttime or you are gathering stone ore in a mine, there must be overhead light to see the shining point. To do this, you will need to wear a candle or a mining hat. Both headpieces spawn in the crates found in and around the caves.

Using a recycler with certain items will allow you to break the items down into stones. There are many less useful items found in crates and barrels around beaches, roads, and monuments. If you have moved onto metal tools, your old stone tools and spears can go into the recyclers found at monuments to be broken back down into 50 stone. 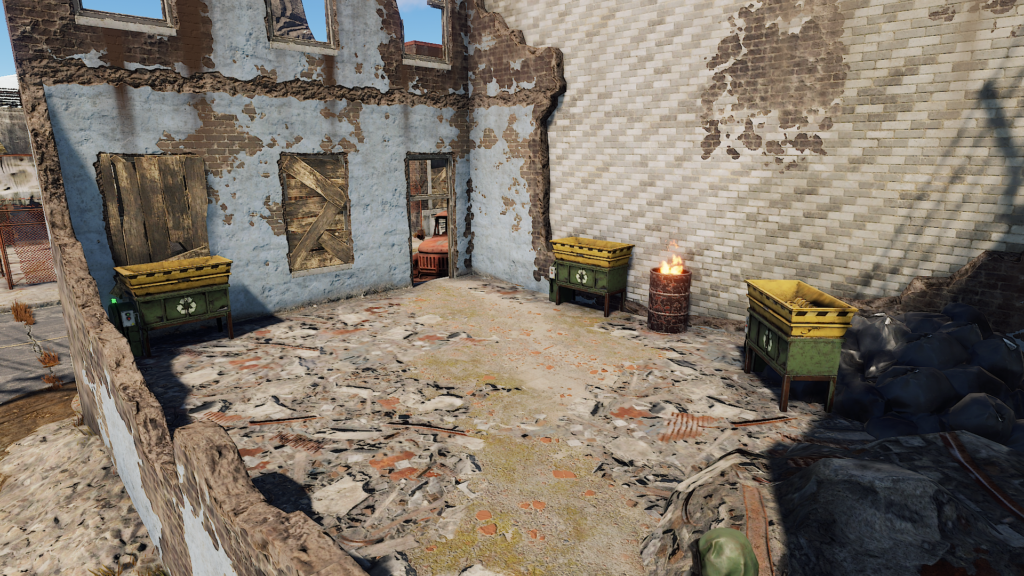 You get up to 100 stone from items such as the concrete barricades and fireplaces, and much more from advanced defense items such as the high external stone wall and stone gate. If these defenses aren’t useful to you or you have the blueprints already researched, there is no good reason not to toss them into the recycler for a cool 1500 stone.

Purchasing stone from the Outpost

As you approach the middle and endgame of a wipe, you may find yourself with an excess of other scrap and wood resources. If this is the case, you can trade with the Outpost vending machine at a rate of 50 scraps for 1000 stone or 500 wood for 150 stones. If your wood is low, the exchange remains the same in reverse.

This exchange is, without a doubt, the fastest way to find stone in RUST. The speed at which you can gather scrap far outweighs how fast you can mine for stone. The danger of this method is that you must visit the Outpost monument to make it work. 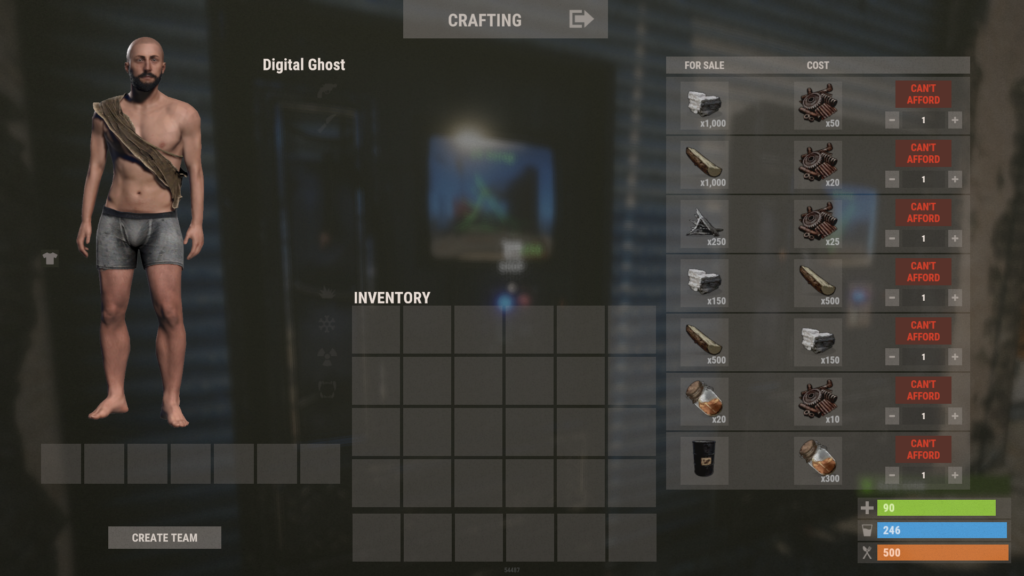 To make a trip to the Outpost worthwhile, you will need to be exchanging scrap for stone in large quantities, putting you at risk of losing your loot to a player, or an unfortunate death to any one of RUST’s potential threats.

To avoid these dangers, travel well equipped, with armor and guns being essential. Travel in groups when you can. If possible, find a mini-helicopter and fly to the Outpost. If you land close enough to the trading terminal, you can interact with it without leaving your helicopter seat.

Extracting stone from the Giant Excavator

If you find yourself in the position of being a powerhouse on the map, you can take a trip to the giant excavator and spend 30 diesel fuel to dig up 150,000 stones across the course of an hour. Diesel fuel can either be purchased from the Outpost for 300 low-grade fuel a piece or found as a collectible pick-up item at the Large and Small Oil Rig monuments. 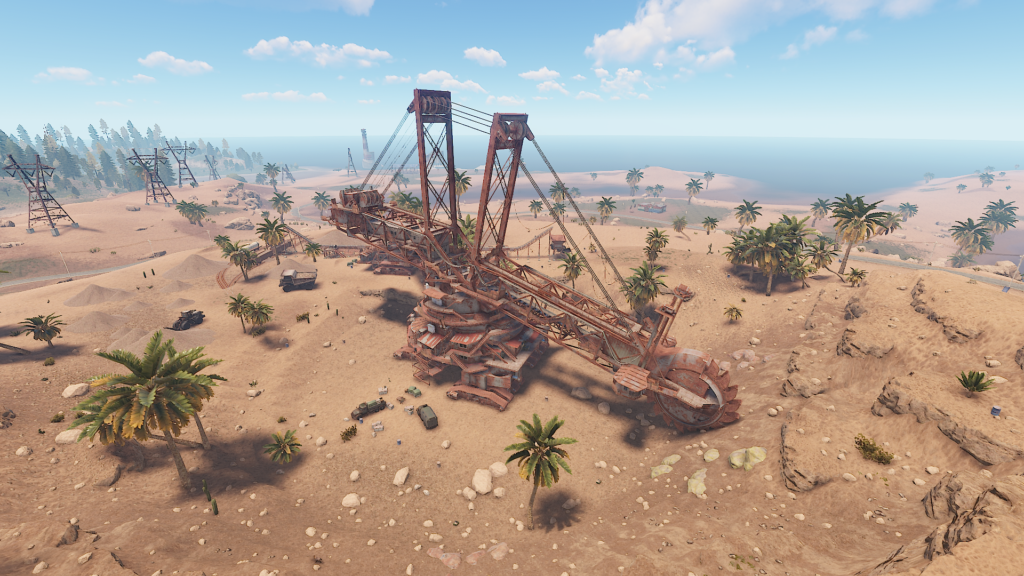 The Excavator monument is loud and relatively slow-moving. Everyone nearby will know it’s being used and may take the opportunity to come to ambush you and try to take your hard-earned materials. So be prepared to defend the monument’s two separate payload zones for the whole time it is active.

Ready to rock and roll?

Each of these steps will help you in your never-ending quest to find stone in RUST. Some are best applied early on, while others are more appropriate in the later game. However, it is essential to know them all, as the stone will remain your most required component for its versatility and relative strength in base building and upkeep costs.

In your travels, you may even be able to spot some sucker in a later stage not being careful enough and take advantage of the situation. There are always “alternative” ways to get what you want in RUST.